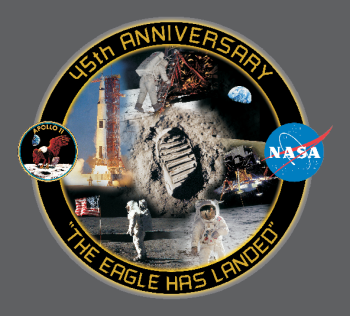 Remembering that moment 45 years ago when Apollo astronaut Buzz Aldrin walked on the moon.

I was one of those watching the broadcast.  I sat in front of the TV waving a miniature U.S. flag the entire time.  The memory still makes me smile.

Follow over the jump for more from NASA, Space.com, and Discovery News (I told you, all the usual suspects).

Space.com chimed in with its own Apollo 11 Retrospective: "One We Intend To Win."

Filmmaker's Rod Pyle compiles footage from July of 1969 in commemoration of the mission that put the first bootprints on the moon.Title is taken from President John F. Kennedy's so-called "moon speech" of 12 September 1962.

Finally, Discovery News explains What Did We Learn From The Apollo 11 Moon Landing?

45 years ago, astronauts aboard the Apollo 11 landed on the moon! What did we learn from this historic mission? DNews welcomes Dr. Ian O'Neill and space historian Amy Shira Teitel to discuss all the reasons why this mission was such a success. #Apollo45

May the Apollo missions not be the high point of crewed space exploration.  NASA, of course, shares the agency's determination that this not be the case in NASA Administrator Charles Bolden Apollo 11 45th Anniversary Message.