Finally, both houses of Michigan's legislature pass a road bill 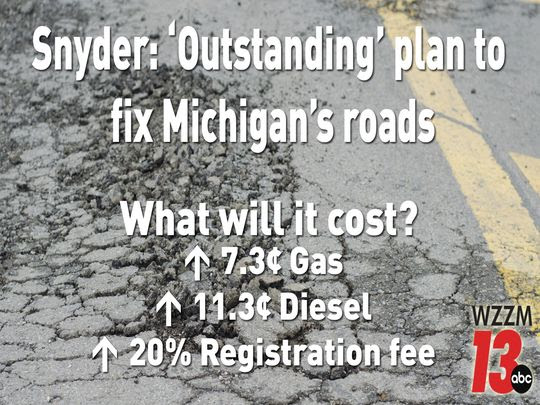 When the Michigan Senate passed a road funding bill, I wrote "Looks like it will be a long summer before this issue is resolved."  That was back in July.  A bill didn't finally pass both houses until after Election Day.  WXYZ has the story in State legislature approves road funding fix.


WXYZ followed up with the bureaucracy's reaction in MDOT responds to road funding plan.

Officials at the Michigan Department of Transportation are responding to Lansing's plan to fund road fixes.

That looks like good news, although it will come at a price. I'm not concerned about the direct costs of the bill, including the higher fuel taxes and registration fees.  I'm not even upset about the surcharge for electric and hybrid vehicles like mine; I've been expecting that for years.  Instead, I'm worried about the transfer of money from the general fund, which will impact other state services, like education.  That's why I wrote in June I was right to vote for Proposal 1, even if I was on the losing side of the largest defeat of a state ballot measure in Michigan history.  I'd rather have had that deal, as unwieldy as it was.  Oh, well, at least the roads will be better.
Posted by Pinku-Sensei at 12:59 AM