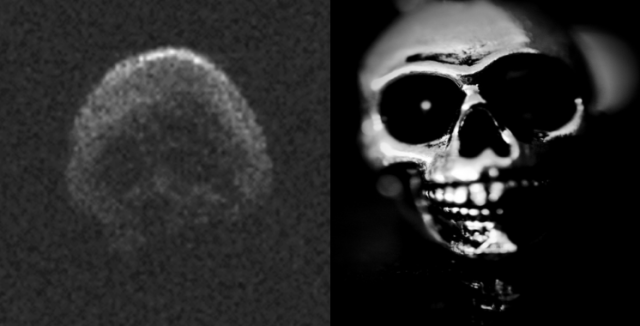 I admonished my readers to avoid "get[ing] hit by any space junk" at the end of A zombie drink for Friday the 13th.  It looks like no one was, as CNN reported Mystery object falls to Earth.

Astronomers captured video and images of a mysterious piece of space junk entering the Earth's atmosphere.

As I wrote last month, "this will provide a good opportunity for scientists to observe how spacecraft break up in the atmosphere and it will also remove one more piece of space junk.  Good viewing and good riddance!"

Speaking of preparing for future asteroid strikes, the planet had what I expected to be a near miss on Halloween.  It was even more exiciting that I expected, as Wochit reported Skull-Faced Asteroid Gives Spooky Halloween Scare.

A renegade asteroid, officially named 2015 TB145, looked like the face of death as it was approaching Earth last night. It was observed by the Planetary Radar Group at the Arecibo Observatory in Puerto Rico on Halloween eve, October 30. The animation of it posted by the observatory, shows that the skull face is really just an optical illusion, not a chilling portent of impending doom. Earlier this week, NASA explained how it planned to study the asteroid, which they have nicknamed, "The Great Pumpkin."

Scientists observing asteroid 2015 TB145 with NASA's Infrared Telescope Facility (IRTF) on Mauna Kea, Hawaii, have determined that the celestial object is more than likely a dead comet that has shed its volatiles after numerous passes around the sun.
...
The first radar images of the dead comet were generated by the National Science Foundation's 305-meter (1,000-foot) Arecibo Observatory in Puerto Rico. The radar images from Arecibo indicate the object is spherical in shape and approximately 2,000 feet (600 meters) in diameter and completes a rotation about once every five hours.

"The IRTF data may indicate that the object might be a dead comet, but in the Arecibo images it appears to have donned a skull costume for its Halloween flyby," said Kelly Fast, IRTF program scientist at NASA Headquarters and acting program manager for NASA's NEO Observations Program.

I'm glad that's all that happened.  I can wait until Apophis Day.
Posted by Pinku-Sensei at 8:42 AM