Zombie Apocalypse Index for Day of the (Walking) Dead

It's All Souls Day, AKA Day of the Dead (Dia de los Muertos) as well as a day "The Walking Dead" airs.  To mark the occasion, I've found an appropriate story that fits in with this blog's original mission of explaining how to survive collapse, the Zombie Apocalypse Index, which ranks U.S. cities according to their potential to survive the fictional civilization-ending plague based on "ability to protect self against the virus, ability to curb the virus, ability to come up with a cure and the ability to survive the epidemic with sufficient amount of food."

I begin with the bad news from Wochit about which cities to avoid in If the Zombie Apocalypse Happens, New York is Doomed!


If the zombie apocalypse were to ever happen, New York City is apparently doomed. CareerBuilder and Economic Modeling Specialists International recently conducted a “totally necessary and 100 percent practical survey” of the 53 largest metropolitan areas in the United States to see which metro region would be most, and least, likely to survive a zombie apocalypse. In the survey, the New York-Newark-New Jersey metropolitan area landed at the very bottom of the resulting Zombie Apocalypse Index, beating out Tampa, Miami, Jacksonville, and a whole bunch of other cities not found in Florida. To add insult to New Yorkers’ injury, the survey listed Boston as the no. 1 most zombie-ready city in the country.

ETA: After five years, the Wochit video has been taken down, which screws up the social media preview image. I'm replacing it with The Worst Place To Be During A Zombie Apocalypse (Worst place to go Zombie outbreak) from Ponder.

A study by Careerbuilder.com corroborates the model’s findings with Chicago one of the worst metro areas to be in during a Zombie Apocalypse. The research was comprised of a weighted index ranking 53 us cities based on 5 different scoresw, Defense, Containment, Cure and Food. The scores were established by analyzing factors such as population density, biomedical research and supply of food to name a few. As for the best cities to find yourself in, Salt lake city UT, Columbus OH and surprisingly, Boston MA were at the top of list. So while New York LA and the Windy city are wonderful places to visit, those of you who are afraid of a zombie apocalypse might wanna consider settling their zombie proof bunkers somewhere else.

The following table from Fortune names nine metropolitan areas to avoid during the Zombie Apocalypse. 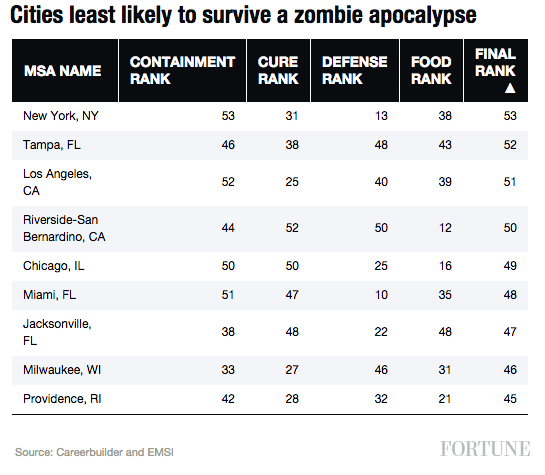 Los Angeles and Riverside-San Bernardino were third and fourth least able to survive.  That helps explain why L.A. fared so poorly in "Fear the Walking Dead."  Las Vegas would be almost as bad off, as Tech Times listed it as tenth least likely to survive.

Not all of southern California is doomed, as San Diego landed in the top ten best places.  Follow over the jump for stories about the best major cities to live in during the zombie apocalypse as well as how Michigan fared.

Fortune also named the ten cities best able to survive World War Z and explained why Boston was number one.


Boston scored the highest for its “cure score”, no surprise considering the city has been receiving the most dollars for medical research funding and has one of the highest active physicians per capita in the country. The study also points to a reasonable population density (read: fewer zombies) and good resources to combat the hungry horde. 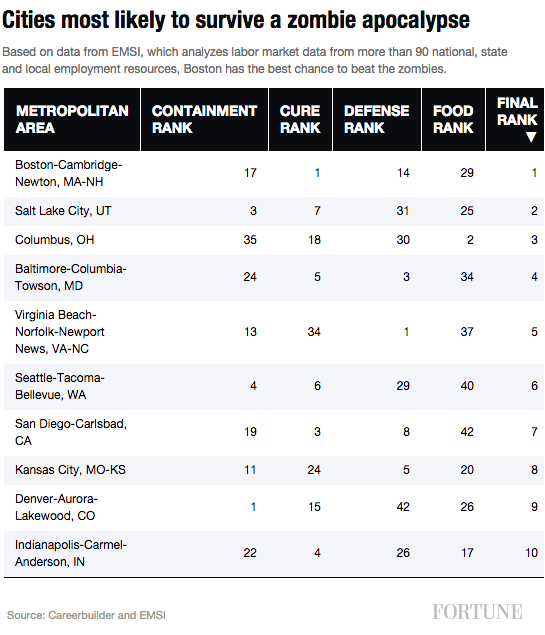 Other cities that ranked high on the index included Salt Lake City, Utah (which was deemed a very good place to contain the spread of the virus), and Columbus, Ohio, which has a robust wholesale goods industry that will provide ample food.

I'm not surprised by either Boston or Salt Lake City.  In addition to the factors listed, the residents of the two cities have a higher level of social cohesion than nearly all the cities in the bottom ten.

Other standouts are Denver with the best score for containing the outbreak and Virginia Beach with the best defense rank.  That last, because of the naval bases there, is one of the reasons why San Diego is on the list along with its high cure score.  Now I'm wondering if the band of survivors in "Fear the Walking Dead" might try to sail there next season.  I'm also wondering if the residents of Alexandria in "The Walking Dead" will interact with the survivors in Virginia Beach.  Probably not, which is too bad.


Grand Rapids ranked No. 12 overall among 53 cities. Factors included a No. 1 ranking for its food supply, based on the percentage of exports in non-perishable food manufacturing. Battle Creek's Kellogg's cereal production appears to have benefited Grand Rapids in this case.

But Grand Rapids also received the lowest score of any city for defense against the virus. Here, factors including percentage of the population in the military or law enforcement were considered, along with availability of small arms exports.

Detroit ranked No. 5 for its ability to contain the virus, but still came in No. 41 overall. Motown is credited with a relatively high percentage of residents working in engineering and construction but, in this case, low population density following the recession works to its advantage in slowing the rate at which the virus would spread.

Detroit was the second worst city in the country for defense after Grand Rapids.  I never thought zombies would be a reason to hire more public safety and keep Selfridge open, but they are.  Surprise!
Posted by Pinku-Sensei at 11:34 AM