'SPECTRE' knocks 'The Martian' out of number one at the U.S. box office 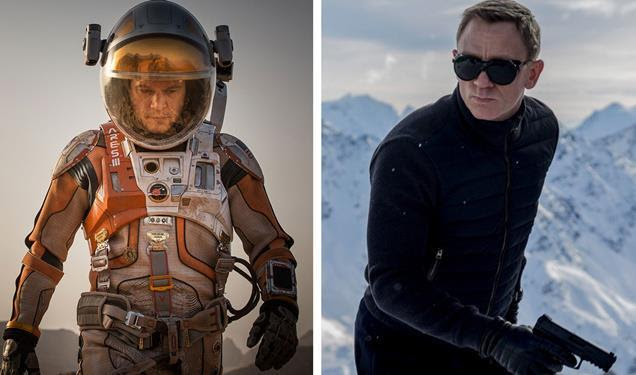 I expressed my intention to skip reviewing last weekend's new releases in 'The Martian' returns to number one as most Halloween films bomb based on my expecting that they wouldn't be that good.  I was right, as New York Magazine's Vulture blog reported This Was the Worst Domestic Box Office Weekend of 2015.  The only new release to break the top five was the cooking film "Burnt," which came in fifth with only $5 million.  Against such weak competition, "The Martian" held on to the top spot.

Meanwhile, "Spectre" was setting records in the U.K.

The expectation was that the latest Bond film would revive the U.S. box office when it opened.  It did, as Daily Variety reported in Box Office: ‘Spectre’ Tops ‘The Peanuts Movie’ With $73 Million.

James Bond and Charlie Brown brought the box office roaring back to life, as “Spectre” and “The Peanuts Movie” attracted big crowds over their opening weekends.

“Spectre,” the latest 007 adventure, took first place, debuting to $73 million from 3,929 theaters — a hefty figure and the second-highest debut in series history, but one that nevertheless trails the launch of “Skyfall.” The previous film in the long-running franchise bowed to $88.4 million, but enjoyed better reviews and benefited from being the only new wide release in its opening weekend. Going into the weekend, tracking suggested that the film would debut to $80 million, but the strength of “The Peanuts Movie” and some critical grousing about plot holes wide enough to drive an Aston Martin through may have depressed ticket sales.

One of the critics grousing about the movie was Joe Morgenstern of the Wall Street Journal.

"Spectre" is the newest James Bond film, starring Daniel Craig in his fourth turn as the famed spy. But can "Spectre" live up to expectations set by "Skyfall"? WSJ's Joe Morgenstern reviews. Photo: Sony Pictures

Oh, my, the answer to the question appears to be no.  Peter Suderman of Vox was even more scathing, declaring Spectre is the worst James Bond movie in years.  He damned the movie with faint praise before pulling out the knife with his thesis sentence: "Indeed, while the stunning opening sequence offers a succinct demonstration of all the ways a Bond movie can go right, what follows mostly serves to illustrate all the ways Bond movies can — and do — go wrong."  It's a long list.

I could find more poor reviews, but I'll move on after speculating that Sam Mendes may be using up all his best material on Penny Dreadful, which I jokingly call "James Bond, Vampire Hunter."  If so, that would be a shame.

Follow over the jump for the rest of the report and my commentary, including two Bond-related drink recipes from Tipsy Bartender.

Poor reviews may have suppressed the U.S. box office, but they didn't hurt the film overseas.

Internationally, however, “Spectre” remains a juggernaut, pulling in $200 million and pushing its worldwide total to more than $300 million after two weeks in release.

The film should have no problem making a profit.

As for what's next, there might be a new actor playing Bond, as Daniel Craig seems to be getting tired of the role.  That's attracted most of the speculation, but there's another change coming, as the Wall Street Journal reported James Bond Film Rights Up For Grabs.

The deal shouldn't affect the movie-going experience, but it will still be worth following.

Daily Variety continues its report on the rest of the top films this weekend.

While older audiences flocked to see the martini-swilling spy, Fox’s “The Peanuts Movie” appealed to families. The adaptation of Charles Schulz’s beloved comic strip racked up $45 million across 3,897 screens. It cost $100 million to make and was produced by Blue Sky, the creative force behind the “Ice Age” series.

Heading into the weekend, “The Peanuts Movie” had its own challenges. A younger generation didn’t grow up on Snoopy and Charlie Brown and newspaper funny pages have been a casualty of the blood-letting in the print industry. That meant re-introducing the characters, something that other, older pieces of intellectual property, such as “Mr. Peabody and Sherman,” have been unsuccessful in doing.

But the bet paid off. Thirty eight percent of the audience was under the age of 18 and seemed to like what they saw, handing the film an A+ CinemaScore.

I was worried about that very issue when I saw the trailers.  People my age grew up on "Peanuts," but anyone born in the past 20 years would know the characters only from TV specials and Met Life ads.  I'm glad that ended up not being a problem.

The success of the two new films displaced “The Martian” from the top spot. The Ridley Scott space adventure took first place for four of the past five weekends and has become the highest-grossing domestic release of the director’s career. It added $9.3 million to its $197.1 million haul and should pass the $200 million mark next week.

So far, this is a very good year for science fiction movies, as "The Martian" joins "Mad Max: Fury Road" and "Jurassic World" with "Star Wars: The Force Awakens" opening next month.

The top five was rounded out by “Goosebumps” with $7 million and “Bridge of Spies” with $6.1 million, pushing their domestic hauls to $66.4 million and $55 million, respectively.

I'm impressed by the staying power of these movies.

And now, a toast to the success of "SPECTRE" from Tipsy Bartender with two recipes, beginning with the classic How to make the Vesper Martini.

The original James Bond martini...........the VESPER MARTINI! We've seen Bond drink a plethora of beverages in the books and movies, everything from a Scotch and Soda to a Heineken! If you want to recreate one of the traditional Bond drinks, try out this classic cocktail that was invented and named by the James Bond character in the novel Casino Royale. Made as per his instructions with gin, vodka, and Kina Lillet, it's super strong! If you're as badass as Bond is, you'll love it. Don't forget the lemon peel garnish for perfect accuracy!
...
VESPER MARTINI
3 parts Gordon's Gin
1 part Vodka
1/2 part Kina Lillet

Get your spy game on with....THE 007! Orange juice and orange vodka lend the double 'O's, and 7-Up gives us the 7. Such a clever drink and so tasty too! It's light and refreshing and tastes like spiked orange juice!
...
007 COCKTAIL
1 part Orange Vodka
1 part Orange Juice
1 part 7-Up.

That's it for Entertainment Sunday.  Stay tuned for continued entertainment coverage tomorrow, as I have two articles about the state marching band championship to share.