Over his long career as a public planner, Lewis L. Lawrence grew accustomed to the bland formalities of planning commission meetings in Virginia’s Middle Peninsula, where forgetting to cover one’s mouth while yawning through a lecture was about as rude as people got.

But lately, the meetings have gotten far more exciting — in a bad way, said Lawrence, acting executive director of the Middle Peninsula Planning District Commission. A well-organized and vocal group of residents has taken a keen interest in municipal preparations for sea-level rise caused by climate change, often shouting their opposition, sometimes while planners and politicians are talking.

The residents’ opposition has focused on a central point: They don’t think climate change is accelerated by human activity, as most climate scientists conclude. When planners proposed to rezone land for use as a dike against rising water, these residents, or “new activists,” as Lawrence calls them, saw a trick to take their property.

“Environmentalists have always had an agenda to put nature above man,” said Donna Holt, leader of the Virginia Campaign for Liberty, a tea party affiliate with 7,000 members. “If they can find an end to their means, they don’t care how it happens. If they can do it under the guise of global warming and climate change, they will do it.”
...
The uprising began at a February meeting about starting a business park for farming oysters in Mathews County, Lawrence and other planners recalled. The program to help restore the Chesapeake Bay oyster population was slated for land owned by the county, but it was shouted down as a useless federal program that would expand the national debt. The proposal was tabled.

As the opposition grew over the summer, confrontations became so heated that some planners posted uniformed police officers at meetings and others hired consultants to help calm audiences and manage the indoor environment, several planners said.

In James City County, speakers were shouted away from a podium. In Page County, angry farmers forced commissioners to stop a meeting. In Gloucester County, planners sat stone-faced as activists took turns reading portions of the 500-page Agenda 21 text, delaying a meeting for more than an hour.

“Agenda 21 is the least thing they should be worried about,” said Glick, who like other environmentalists contacted by The Washington Post was surprised at the attention being given the document. “It has no legal or policy implication for local governments in the United States.”

Holt, who began scrutinizing public planning when her interior design business failed after the housing bubble popped, begs to differ. She sees the document as evidence of a global agenda that threatens property rights.

Her suspicions echo those of Tom DeWeese, president of the conservative American Policy Center, who wrote an essay opposing “smart growth” titled “Fight Agenda 21 or Lose Your Freedom.” The ultra-conservative John Birch Society cautions adherents through its Web site that the “Agenda 21 program may already be in your local community, through your home town or city’s membership in . . . Local Governments for Sustainability.”

I've mentioned Agenda 21 and the paranoid Tea Party reaction to it before in response to an article about Tea Partiers in Florida protesting manatee protections.

"We cannot elevate nature above people," explained Edna Mattos, 63, leader of the Citrus County Tea Party Patriots, in an interview. "That's against the Bible and the Bill of Rights."
...
Current regulations have helped boost the manatee population from 100 to 500, so clearly they're sufficient, Mattos said. In fact, in her view, the manatee rules tie in to global development issues.


I think Mattos needs to loosen up the Reynolds Wrap lining her tricorn hat. Until she does, I give you this response in the spirit of "a picture is worth 1000 words." 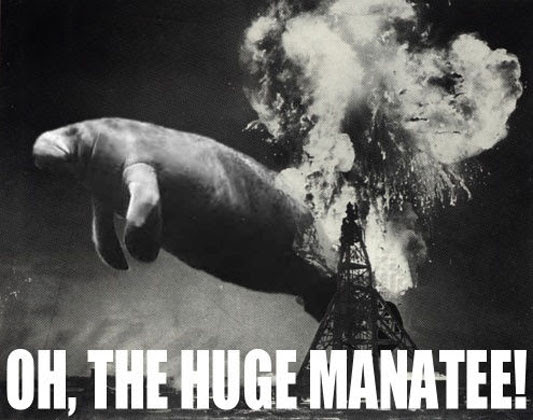 In a follow up, I piled on with the following macro.

As for this latest bit of Agenda 21 hysteria, I'll let Charles Pierce of Esquire handle it for me.


Oh, god, not this again. Agenda 21 is an article of faith among the increasingly indistinguishable fringe of conservative thought. It was all over that Florida GOP get-together a few months back. I like that last part, especially. "That the activists see as..." Show these people a tackhammer and they'll blame Agenda 21. How do you suppose they "see it that way"? Is it because they were all watching to see what the UN was up to back in 1992? Not bloody likely. They were too busy counting up how many murders the Clintons had arranged in Arkansas. They see it that way because they turn on their radios and hear this nonsense for 18-20 hours a day. They see it that way because there is an entire TV news operation dedicated to feeding their fact-free paranoid fantasies.

And the whole mess started because they wanted to help the oyster farmers, and "some activists" screamed about The Deficit and down went the oyster farmers. (Dear Oyster Farmers: Please feel free to use, without cost, and in any format you deem appropriate, the blog's basic philosophy regarding the national economy: Fk the Deficit. People Got No Jobs. People Got No Money.) There is a dangerous viral lunacy afflicting our politics even at the most basic level, and a lot of somebodies are making a lot of dough in the business of making people angry and stupid. These are our airwaves, dammit. They also belong to the oyster farmer, who I imagine could use a break right now.

Well said, Charlie. For that, you have a new fan.

Hat/Tip to Aratzio Bizzaro on Facebook.
Posted by Pinku-Sensei at 5:22 PM