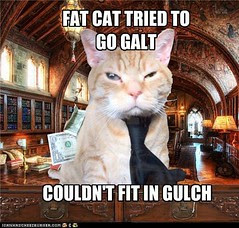 
Paul Krugman quoted Jonathon Chait, on the revelation that Paul Ryan is an Ayn Randite:


Ryan clearly has a passion for ideas and isn’t just interested in short-term positioning. It would be nice if the party had people like that who didn’t also happen to be loons.
...
Last week, I called Republican budget sorta-kinda point man Paul Ryan "crazy but honest."

It turns out that Krugman has since figured out that Ryan isn't honest, either.


One crucial thing you need to understand about political journalists is that with some honorable exceptions, they don’t know or care about actual policy. In a way, that makes sense — the skills needed to cultivate contacts, to get the inside scoop on what’s going on in Congressional scheming or campaign war rooms, are very different from the skills needed to interpret CBO spreadsheets. The problem, however, is that all too often political journalists mistake the theater of policy for reality (or don’t care about the difference).

Hence, the awful decision of Politico to give Paul Ryan an award as healthcare policymaker of the year.

Even if you like the thrust of Ryan’s ideas, even if you think privatizing Medicare and turning it into a voucher scheme is fine, what became painfully, embarrassingly clear during the debate over the Ryan plan was that Ryan is, well, incompetent; the plan was a mess, from its invocation of ludicrous Heritage Foundation projections to its crazy assertions about what would happen to discretionary spending. It’s true that the plan “got everyone talking”, as Politico says — but mostly it got people talking about what a mess Ryan’s effort was.

Oh, and it was pretty clear that Ryan wasn’t being honest about his own numbers.

What’s going on here, I suppose, is that Politico is mistaking theater for policy. Ryan isn’t an important health care reformer, or even minimally competent in his attempted wonkery, but he plays a deep thinker on TV. And the people at Politico either don’t understand the difference, or they don’t care.

Here's what I had to say in response.


As you've figured out, Paul Ryan isn't an intellectual, although he plays one in Congress; he's a salesman who uses the pretence of being an intellectual to sell himself and what passes for his ideas. As Gaius Publius on AmericaBlog wrote in response to your comment last January that Ryan was being "intellectually lazy" in not knowing the truth about the pre-crisis debt status of European countries:


Unfortunately, you can't be intellectually lazy if you're not an intellectual. Ryan's a Movement Conservative operative, one with good enough hair to get him into Congress.

Intellect is not his playing field, it's his "act", as Krugman correctly points out (or his "USP" in sales parlance, unique selling point, like "squeezably soft" or "doesn't leave a ring"). Ryan's playing field isn't intellect, it's power, and his tool is "Say anything to win". It was Rove's tool, Bush's tool, Rumsfeld's tool; it's Newt's tool, McCain's tool, Boehner's tool; and it's Ryan's tool.

You can't be an intellectual if the mind doesn't matter.