This has been a wild year for weather, not only here in Metro Detroit, but elsewhere in Michigan, our neighboring state of Ohio, and the nation as a whole. Before I talk about this year's local weather as recorded in this blog, I'll give all of you a national perspective first, then focus on the local and regional weather stories for the year.

Earlier this week, Grist included the following paragraph in Politics blocks scientists from explaining why this year’s weather was record bad.


A typical year in the U.S. includes three to four extreme weather events that do more than $1 billion in damage, but 2011 featured 12 of them. Add in the slightly-less-expensive extreme weather we experienced, and the total price tag is north of $50 billion.

They linked to a New York Times article, "
Harsh Political Reality Slows Climate Studies Despite Extreme Year," which filled in some of the details.


“I’ve been a meteorologist 30 years and never seen a year that comes close to matching 2011 for the number of astounding, extreme weather events,” Jeffrey Masters, a co-founder of the popular Web site Weather Underground, said last month. “Looking back in the historical record, which goes back to the late 1800s, I can’t find anything that compares, either.”

Many of the individual events in 2011 do have precedents in the historical record. And the nation’s climate has featured other concentrated periods of extreme weather, including severe cold snaps in the early 20th century and devastating droughts and heat waves in the Dust Bowl era of the 1930s.

But it is unusual, if not unprecedented, for so many extremes to occur in such a short span. The calamities in 2011 included wildfires that scorched millions of acres, extreme flooding in the Upper Midwest and the Mississippi River Valley and heat waves that shattered records in many parts of the country. Abroad, massive floods inundated Australia, the Philippines and large parts of Southeast Asia.

As you can see from my coverage of local weather, metro Detroit had a pretty intense year.

I started off my weather blogging reporting on heavy rain, but by July, I turned my attention to the heat in Hot enough for you? and Still hot enough for you? I was right to. As the Macomb Daily pointed out in August, it was the hottest July ever in Detroit area


July of 2011 on Monday was officially declared the warmest on record in metropolitan Detroit since the National Weather Service began keeping records in 1874.

“The average temperature for July was 79.3 degrees, beating out the 79-degree average we had in 1955,” said Amos Dodson, a meteorologist with the National Weather Service in Oakland County’s White Lake Township.

There were 14 days where the temperature was 90 degrees or higher and one stretch with seven straight days of 90-degree weather or hotter, he added.

Also, it was the second wettest July on record with 7.66 inches of precipitation.

That last paragraph set the stage for the next narrative of wild weather--record-setting precipitation, including rain. The first record to fall locally was in Ann Arbor.

2011 is the wettest year on record in Ann Arbor area


The year still has almost four weeks left in it, but it’s already the wettest in history in the Ann Arbor area.

As of 7 a.m. Monday, Ann Arbor had received 48.59 inches of precipitation in 2011, said University of Michigan weather observer Dennis Kahlbaum.

That’s 4.83 inches more than the total received in 2006, the second wettest year in history, according to records kept since 1880. Average annual precipitation in the Ann Arbor area is 37.55 inches.

With December bringing in an average of 2.5 inches of precipitation for the month, we could end the year with 6 or more inches above the previous record.

That was on December 6th.

More rain ahead for metro Detroit


Already the second-wettest year on record, 2011 could top 1880's 47.69 inches of rainfall with the expected precipitation, Kook said. As of today, 45.96 inches of precipitation has fallen in Metro Detroit, topping 1881's second-place record of 45.44 inches.

That was on December 16th. As of late yesterday, the new record had been set for the year.


2011 has been the wettest year in history for Ann Arbor. As of 1 p.m. Friday, the University of Michigan measured 50.62 inches of rain since January.

Friday's rainfall totaled 0.04 inches from 7 a.m. to 1 p.m. at the Detroit Metro Airport. Kook said the area likely can anticipate another 0.2 inches to fall by Saturday morning.

The next records to fall were in Ohio. Here is an excerpt from a report in the Toledo Blade for the 22nd of December.


But like a baseball player who hits a weak infield ground ball to set a career batting record, the rain that fell late Tuesday and early Wednesday morning was more than enough to make 2011 the wettest year in Toledo's recorded history.

The record of 47.84 inches, set in 1950, was broken sometime between 4 and 5 a.m., according to National Weather Service readings at Toledo Express Airport, the city's official reporting station. Additional rain later in the day brought the year-to-date total to 48.15 inches as of 5 p.m.

With 2.41 inches of precipitation for the month, December also is well on its way to becoming the 11th of the year's 12 months to be wetter than average. Toledo's December norm is 2.68 inches, and more showery rain remained in the forecast through Thursday.

"It's not just one freakish month," Sarah Jamison, a hydrologist at the National Weather Service office in Cleveland, said of Toledo's precipitation record. "This was a persistent pattern."
...
Several other Ohio cities had broken precipitation records before Toledo did.

Youngstown and Columbus also have had record rain in 2011, and Mansfield, Dayton, and Akron-Canton all have had their second-wettest years.

In the spirit of a picture being worth 1000 words, here are two of them to illustrate the rainfall totals in Ohio. 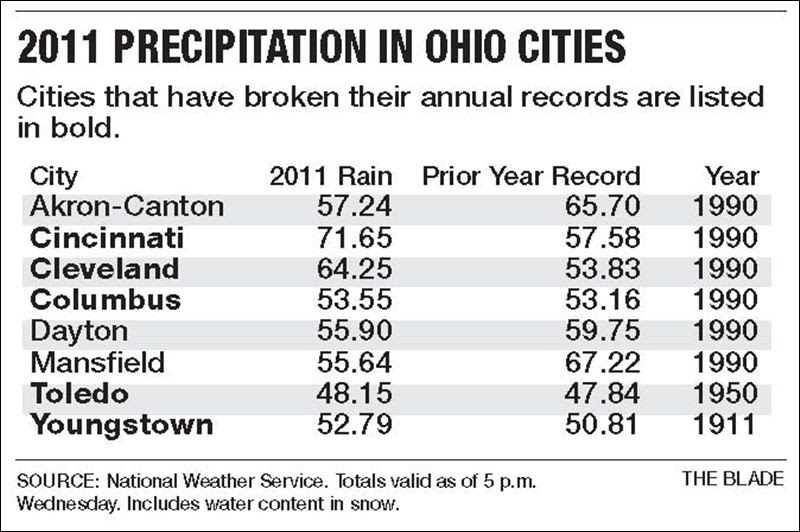 Remember, all of those totals are a week old. They'll be much higher when all is said and done tomorrow night.

Today, the other shoe finally dropped, as the Detroit Free Press reported a few hours ago.

Detroit splatters toward new record for rain, snow, sleet ... all that wet stuff


It’s down to the wire, but Detroit was poised late Friday to set a weather record, with the region’s wettest year in 131 years.

Other parts of Michigan also had their share of soggy weather this year. Flint was headed Friday toward its fourth wettest year on record, according to the Weather Service.

I know weather isn't climate, but what a year it's been!

UPDATE: The Free Press has the latest.


According to the National Weather Service website, 2011 became the wettest year in Detroit in recorded history. The 2011 total logged for metro Detroit was 47.70 inches, beating the record set in 1880 by one one-hundredth of an inch.

It's official!
Posted by Pinku-Sensei at 8:01 AM