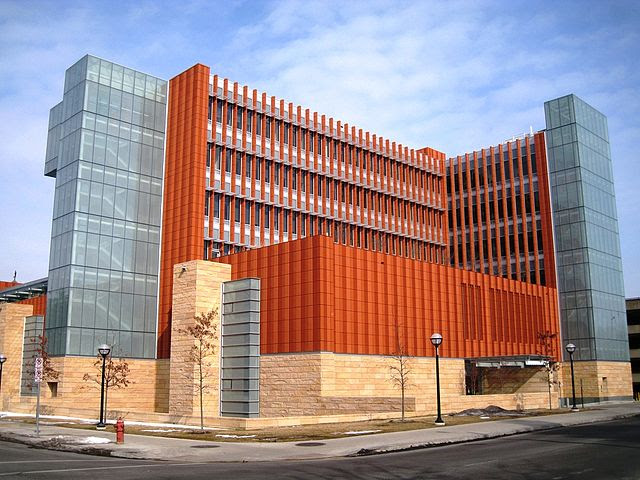 A free public event featuring former presidential economic advisers will be held at U of M's Ross School of Business from 4:00 to 5:30 P.M. on Tuesday, September 18th.
Credit: Andrew Horne on Wikipedia


If anyone in Washtenaw County wants to hear what the experts think about the tax policies of President Barack Obama and Republican nominee Mitt Romney, they'll have their opportunity this Tuesday afternoon. That's when three former economic advisers to both Republican and Democratic presidents along with an adviser to John McCain's 2008 presidential campaign will discuss the candidates' tax policies at a free event open to the public on the University of Michigan campus.

"Presidential Election Forums: What's at Stake in the Tax Policy Debate?" will be held from 4:00-5:30 P.M. on Tuesday, September 18th, at the Blau Auditorium of the Ross School of Business, which is at 701 Tappan Street in Ann Arbor. The event is sponsored by the U of M's Office of Tax Policy Research.

The featured speakers include two former Assistant Secretaries of the Treasury, one each from the Reagan and Clinton administrations, a former member of the Council for Economic Advisers under Reagan, and the senior economic adviser to the 2008 McCain campaign.

There may be two former Republican officials at this event, but don't expect either of them to be very sympathetic to Romney's or Ryan's tax plans. One of them is Bruce Bartlett, who has turned against the current GOP tax policies. Here is what Wikipedia has to say about his current views.


In August 2009, Bartlett wrote a piece for the Daily Beast in which he attributed the recession of 2009 to George Bush and Republicans, whose policies he claimed resulted in an inferior record of economic performance to those of President Clinton. In the same editorial, Bartlett wrote that instead of enacting meaningful healthcare reform, President Bush pushed through a costly Medicare drug plan by personally exerting pressure on reluctant conservatives to vote for the program. Bartlett claimed that because reforming Medicare is an important part of getting health costs under control generally, Bush could have used the opportunity to develop a comprehensive health-reform plan and that "[b]y not doing so, he left his party with nothing to offer as an alternative to the Obama plan." Bartlett concluded:


Until conservatives once again hold Republicans to the same standard they hold Democrats, they will have no credibility and deserve no respect. They can start building some by admitting to themselves that Bush caused many of the problems they are protesting.

In his book, The New American Economy: The Failure of Reaganomics and a New Way Forward, Bartlett defends Keynesian economic policies, stating that while supply-side economics was appropriate for the 1970s and 1980s, supply side arguments do not fit contemporary conditions.

During an interview on CNN on August 19, 2011, Bartlett stated that presidential candidate Rick Perry "is an idiot, and I don't think anybody would disagree with that." The comment was in reference to Perry's earlier assertion that Federal Reserve Chairman Ben Bernanke's actions would be "almost treasonous" if the Federal Reserve were to engage in expansionary monetary policy before the 2012 election in order to stimulate the economy.

"Almost treasonous?" Tell that to Wall Street after Bernanke did exactly that.
Posted by Pinku-Sensei at 1:09 AM