A meta update on driving

In my first week of blogging, I related the following story I tell my students to describe the importance of forethought and sustainability considerations in consumption.


Back in 2002, my previous car was getting long in the tooth, so I started thinking about replacing it. My son suggested I buy an Aztek. At first, I liked the idea, as it was a rugged, outdoorsy car, which fit my self-image. Then I looked at the car. I could see all kinds of places for food and drink, storage for camping gear and coolers, and rear seats that folded down to make a bed. I then realized that my son was trying to convince me to buy a party-mobile that he could borrow! I might have actually gone along with this idea, but then I looked at the car's gas mileage--24 highway and 16 city. While gas was cheap then, I knew that, within the lifetime of the next car I would buy, it wouldn't be. I also was living 70 miles from my work. I didn't like the idea of trading in a car that got 40 miles to the gallon on the highway for one that was about half as efficient, especially when I knew I'd be paying a lot more for gas. So, I didn't buy an Aztek.

When I needed to buy a car, I got a Kia instead. It got 32 miles to the gallon, but it was an automatic. I was willing to sacrifice a few miles to the gallon so that my left foot and right hand could rest. Yeah, I'm a sucker for convenience, too.

As it turned out, my prediction was correct.  By May 2004, only two years later and less than a year after I bought the Kia in October 2003, gas had broken through $2.00/gallon.  Right after Hurricane Katrina hit New Orleans at the end of August 2005, gas jumped to $3.00/gallon.  By July 2008, it hit $4.00/gallon for the first time.  That Aztek would have been a disaster, especially since the miles I drove increased dramatically to 48,000 at their peak between May 2005 and May 2006.  Here's the short and long of the story I tell my students about that experience.

I use a quote from a Forbes article to drive home the point: "This is why the most fuel-efficient vehicle is a moving van."  It's also how I'm contributing to the trend that I point out every time I post a driving update here, the decrease in miles driven by Americans since the end of 2007.  Calculated Risk posted an update of that statistic yesterday along with the following graph. 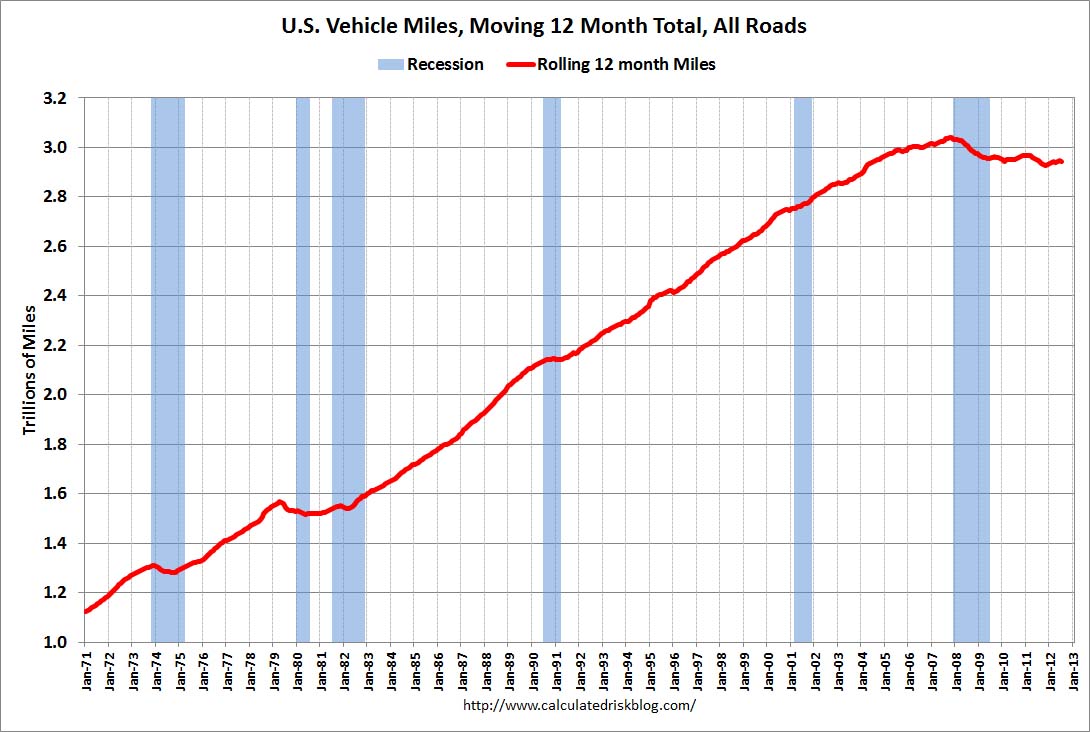 Bill McBride at Calculated Risk analyzed the trends and expected that, despite falling gas prices during July and early August, miles driven would remain depressed, possibly for the forseeable future.


Gasoline prices peaked in April at close to $4.00 per gallon, and then started falling.

Gasoline prices were down in July to an average of $3.50 per gallon according to the EIA. Last year, prices in July averaged $3.70 per gallon - and even with the decline in gasoline prices, miles driven declined year-over-year in July.

Just looking at gasoline prices suggest miles driven will be down in August too.

However, as I've mentioned before, gasoline prices are just part of the story. The lack of growth in miles driven over the last 4+ years is probably also due to the lingering effects of the great recession (high unemployment rate and lack of wage growth), the aging of the overall population (over 55 drivers drive fewer miles) and changing driving habits of young drivers. With all these factors, it may be years before we see a new peak in miles driven.

It's already been years since the last peak. The current spell of lower total miles driven is at 56 months and counting. The previous record of 39 months was set in 1982, so we're in uncharted territory. Don't worry, I'm prepared. I even have a quote and cartoon for that.


Hang on for "a long, wild ride into the unknown." May I be up to being a worthy tour guide.

Yes, I used to wear a work uniform like that. Stop laughing.