Four years ago, we were partying like 1929--what a difference today!

The news on Wall Street this week has been the best since the start of the Great Recession. Earlier this week, Krugman posted this chart of the DJIA since the beginning of 2008 in A Vote of Confidence. 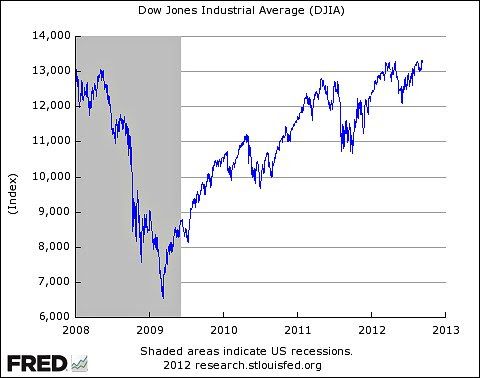 That was Wednesday. Since then, it has continued to climb, as Reuters reports in Wall Street ends at multi-year highs on Fed.


U.S. stocks rose for a fourth straight session on Friday to close out the week at nearly five-year highs after the Federal Reserve took bold action to spur the economy, a move that could keep equities buoyed in the coming months.
...
The Dow and the S&P 500 both closed at their highest levels since December 2007, while the Nasdaq ended at the highest since November 2000. The small-cap Russell 2000 .RUT index closed at the highest since April 2011.

The S&P is now just 6 percent below its all-time closing high of 1,565.15 despite a relatively weak economy and economic risks around the world.

That's quite a change from four years ago today, when Lehman Brothers filed for bankruptcy. From Wikipedia:

Follow over the jump for a flashback to the eve of the collapse of Lehman Brothers, when I posted Tonight we're gonna party like it's 1929! to the unfunnybusiness community on JournalFen and then reposted it to my LiveJournal.

cassildra posted about the federal government's takeover of Fannie Mae and Freddie Mac and how it scared her silly. This weekend, the possible End of Banking As We Know It (tm) continued with the bankruptcy of Lehman Brothers, the purchase of Merrill Lynch by Bank of America, and the attempts to save insurance giant AIG. First, the New York Times headlines.


Fear and greed are the stuff that Wall Street is made of. But inside the great banking houses, those high temples of capitalism, fear came to the fore this weekend.

As Lehman Brothers, one of oldest names on Wall Street, appeared to unravel on Sunday, anxiety over the bank’s fate — and over what might happen next — gripped the nation’s financial industry. By late afternoon, Merrill Lynch, under mounting pressure, entered into talks to sell itself to Bank of America.
Dinner parties were canceled. Weekend getaways were postponed. All of Wall Street, it seemed, was on high alert.


According to people briefed on the matter, Lehman Brothers will file for bankruptcy protection on Sunday night, in the largest failure of an investment bank since the collapse of Drexel Burnham Lambert 18 years ago.

Lehman will seek to place its parent company, Lehman Brothers Holdings, into bankruptcy protection, while its subsidiaries will remain solvent while the firm liquidates its holdings, these people said. A consortium of banks will provide a financial backstop to help provide an orderly winding down of the 158-year-old investment bank. And the Federal Reserve has agreed to accept lower-quality assets in return for loans from the government.

But Lehman’s filing is unlikely to resemble those of other companies that seek bankruptcy protection. Because of the harsher treatment that federal bankruptcy law applies to financial-services firm, Lehman cannot hope to reorganize and survive as a going concern. It will instead liquidate its holdings.


In one of the most extraordinary days in Wall Street’s history, Merrill Lynch is near an 11th-hour deal with Bank of America to avert a deepening financial crisis while another storied securities firm, Lehman Brothers, hurtled toward liquidation, according to people briefed on the deal.

The dramatic turn of events was prompted by the cataclysm of losses that has shaken the American financial industry over the last 14 months.

The moves came after a weekend of frantic negotiations between federal officials and Wall Street executives over how to avert a downward spiral in the markets. Questions still remain about how the market will react and whether other firms may still falter like A.I.G., the large insurer, and Washington Mutual, both of whose stocks fell precipitously last week.

Banks Fear Next Move by Shorts

In May, David Einhorn, one of the most vocal short sellers on Wall Street, made no secret he was betting against Lehman Brothers. Now, some investors are afraid that fund managers like him will take advantage of the climate of fear stirred up by the troubles of Lehman to single out other weak financial firms whose declining share prices would bring them rich rewards.

At emergency meetings over the weekend, the heads of major financial institutions urged Timothy F. Geithner, the president of the New York Fed, and Treasury Secretary Henry M. Paulson Jr., to consider having the Securities and Exchange Commission reinstate a temporary rule to limit the risky but potentially lucrative practice of betting on a firm’s falling share price, according to two people who were briefed on, but did not attend, the meetings.

They are concerned that short sellers might fix their gaze on other big financial institutions. But Wall Street may be breathing easier after one company frequently mentioned, Merrill Lynch, began advanced talks on Sunday to sell itself, and another, the insurance giant American International Group, moved toward a restructuring in an effort to strengthen its financial position.

Rush Is On to Prevent A.I.G. From Failing

The American International Group, the insurance company, is planning a major reorganization and a sale of its aircraft leasing business and other units to stabilize its finances, a person briefed on the company’s strategy said on Sunday.

A.I.G. became one of the focuses at an emergency gathering of Wall Street executives over the weekend, and was trying to arrange a capital infusion in the face of possible credit downgrades.

It was unclear whether A.I.G. would succeed in its capital search, but a person briefed on the discussions said it was seeking more than $40 billion even as it tried to sell assets to shore up its financial footing. Among the businesses likely to be sold is A.I.G.’s aircraft leasing business, the International Lease Finance Corporation. Founded in 1973, the business has nearly 1,000 planes in its fleet.

As I mentioned in


There are at least two diaries on Daily Kos about the situation.

Of course, The Automatic Earth, the definitive financial doom blog has been predicting exactly this kind of financial meltdown and its two most recent posts cover the situation in excruciating detail.  The title of today's post pretty much sums up how dire the bloggers consider to situation to be.

The last update for tonight, I thought you have to see this, just to see how companies value themselves, and how surreal that often is. Using Lehman’s valuations of similar subprime assets, AIG just lost $14 billion, or 18% of its entire value.

And then, on top of that, we can safely presume it has overvalued its CDOs as well, even as it claims a mark-to-market value (yeah, depends on the market?!), and it will lose another $20-30 billion on that. Mind you: AIG, as soon as tomorrow morning, is forced to sell into a hostile overcrowded market.

AIG looks destined to lose over $100 billion in "presumed" asset value in one day. Not on stock, but on assets and swaps valuation. Does not look good.

See you in the morning.
Mish's Global Economic Analysis is hardly a doomer blog, but it pulls no punches.

Culture of Life News, which takes a mystical view of the situation, chimes in.

The Bank Implode-O-Meter hasn't quite caught up, but it's getting there.

James Howard Kunstler hasn't weighed in yet, but he's likely to be insufferable, just as he was after Freddie Mac and Fannie Mae

As for the effect of all this on US taxpayers, just read the cartoon below.

I posted the above at 9:09 PM on Sunday, September 14th on JournalFen and on LiveJournal at 12:25 AM on the 15th. Lehman Brothers filed for bankruptcy at 1:45 AM on the 15th. Before the market opened, here is what CNN had to say about the fallout.

That written, there's still room for improvement, as today's headlines about the anniversary make clear.


Just in the time for the four-year anniversary of the collapse of Lehman Brothers, a report concludes that the U.S. financial crisis has cost the country $12.8 trillion.

Better Markets, a nonprofit organization whose self-described mission is to "promote the public interest in financial reform," estimated the cost of the "Wall-Street caused financial collapse and ongoing economic crisis" using figures from the Congressional Budget Office and Gross Domestic Product estimates from the U.S. Bureau of Economic Analysis.

Lehman Brothers, the financial services firm, filed for bankruptcy Sept. 15, 2008, with about $691 billion in assets, the largest bankruptcy in U.S. history.

Dennis Kelleher, CEO of Better Markets and co-author of the report, said his organization timed its release with the anniversary to influence lawmakers to focus on tighter regulations.


The collapse of Lehman Brothers four years ago today was the Pearl Harbor moment of a financial crisis that, over the next few months, threatened to bring down the entire U.S. financial system.

Blame for the collapse is still being debated. People bought homes they couldn't afford, peddled by lenders who knew -- or should have known -- that the loans were destined to fail. Wall Street sucked up these loans and sold them off in bundles to investors, sometimes while making bets against those same products.

Everyone should have known better. At the top of this list were the government regulators who are supposed to protect the economy from Wall Street excesses, but who instead sat and watched as a bubble built of rotten subprime loans kept expanding.


On September 15, 2008, investment bank Lehman Brothers filed for bankruptcy, igniting a financial firestorm that sent the global economy careening toward the abyss. Four years on, not a single senior Wall Street executive has faced prosecution over the disaster.

This absence of criminal accountability for a crisis that cost the U.S. economy trillions of dollars in GDP and wiped out billions more in personal wealth amplifies the risk of a similar financial meltdown in the future, according to securities experts and former regulators.

The U.S. government’s “entire response to 2008 suggests this could happen again someday,” said John Coffee, a professor at Columbia Law School in New York and a prominent expert on securities law and white collar crime.

Here's to government doing its job!

And now, from the sublime to the ridiculous.


Defunct brokerage Lehman Brothers Inc., which hasn’t paid institutional creditors a dime of its $25 billion hoard after four years in liquidation, is facing louder demands to settle fights with affiliates and pay up.

The brokerage’s parent, Lehman Brothers Holdings Inc., made its first payment of $22.5 billion to creditors last April, about 3 1/2 years after filing the biggest U.S. bankruptcy in history four years ago today on Sept. 15, 2008. The brokerage went into liquidation four days later.

Here's to the next four years being even better on this front than the last four years!

Above to be crossposted to Daily Kos
Posted by Pinku-Sensei at 2:41 PM