Science prizes from the ridiculous to the sublime

It's science award season and the past two Science Saturdays on Daily Kos have reflected that by including stories about the silliest and most respected science prizes. Last week's lead story described the IgNobel Prizes. From the L.A. Times.


The Nobel Prize. The Lasker Prize. The Fields Medal. The MacArthur Fellowships (a.k.a. “the genius grants”). The Kavli Prize. The Ig Nobels.

Among the various awards given for scientific achievement, the Ig Nobels may not be the most coveted — but they’re certainly the most fun. The winners are selected by the Annals of Improbable Research to recognize breakthroughs that first make you laugh, then make you think. “The prizes are intended to celebrate the unusual, honor the imaginative — and spur people's interest in science, medicine, and technology,” according to the organization’s website.

The 2012 Ig Nobels Prizes were handed out Thursday night at Harvard University, a place that knows a thing or two about academic achievement. Winners traveled from as far away as Russia, Japan, Rwanda, France and California to participate in the celebration, and no fewer than five actual Nobel Laureates were on hand to serve as presenters.

My former hometown's newspaper liked the study of coffee spilling, but other news reports preferred the physics of ponytails when writing their headlines.

Of course, the IgNobel Prizes are parodies of the Nobel Prizes. Usually, they're awarded the next week. That's not the case this year, but that didn't prevent people from writing about them. Here's the editor of The Web of Science, which used to be the Science Citation Index, giving his forecast of Nobel Laureates based on how many times their papers have been cited by others.


In two weeks, the eyes of the world's research community will be fixed firmly on Stockholm for the announcement of the Nobel Prizes. In celebration, Thomson Reuters released its annual list of Citation Laureates, esteemed scientists whose contributions to medicine, physics, chemistry and economics make them likely contenders for a Nobel Prize.

Over a decade ago, Thomson Reuters began publishing its annual list of scientists considered candidates worthy of a Nobel Prize. The primary factor pointing to their nomination was their record of citations in scientific literature. At high frequency, citations are a strong indicator of peer esteem and research influence -- citations represent a formal repayment of intellectual debts by members of the scientific community.
...
Over the years, interest in the Thomson Reuters method of forecasting Nobel Prizes has grown and, in 2002, the company officially began releasing its picks. Since then, 26 Thomson Reuters Citation Laureates have gone on to receive a Nobel Prize. Last year, all nine of the winners in medicine, physics, chemistry, and economics were identified as Thomson Reuters Citation Laureates, either in 2008 or 2010. Thomson Reuters is the only organization to predict the Nobel Prizes quantitatively, and it does so through citation data from its Web of Knowledge research database.

No one had commented on that article when I read it (ETA: and they still haven't). I tried, but the site didn't acknowledge my login. Here's what my comment would have been.


The most fireworks over the winner will be over the Laureate for the Economics Prize, at least among the people on your list. Some political faction will make hay over the choice, while someone else's ox will be gored. People on the political Left should root for Atkinson and Deaton, while those on the Right should root for Ross. That would seem to make Shiller a safe choice, right? Don't count on it. He told the truth about the housing bubble back when people on the Right were denying there was any such thing.

Of course, the firestorm over the Economics prize will be nothing compared to the one over the Peace Prize. That always ticks people off!

The Literature Prize will also cause some controversy, as its much more subjective.

As for the hard science prizes, they're usually pretty boring, at least in terms of dispute over the value of the discovery. About the only one I have any personal interest in is Physiology or Medicine; one of the people named is a professor at UCLA. I'd like to see my undergraduate alma mater earn a Nobel.

Controversy aside, I wouldn't mind Shiller winning the economics prize. I'm more familiar with him than the others, and I actually use his work here from time to time--like right now. Here's the latest Case-Shiller Housing Index, courtesy of Calculated Risk. 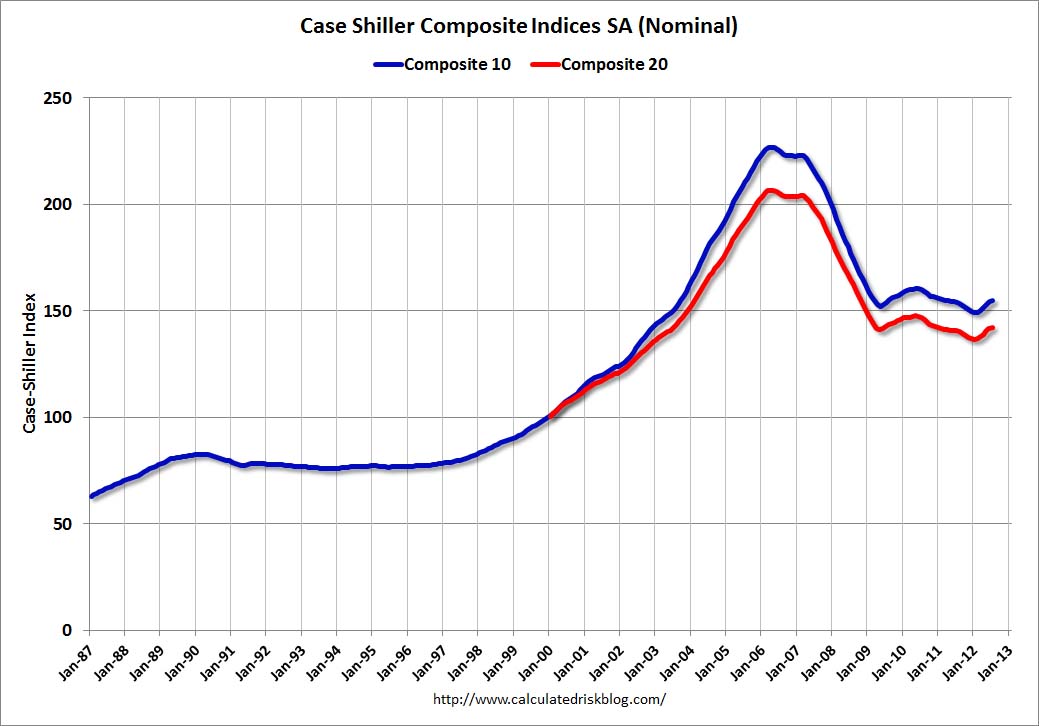 Looks like housing prices have finally bottomed. That's good news, so it's time to break out Professor Farnsworth for the second time this month.