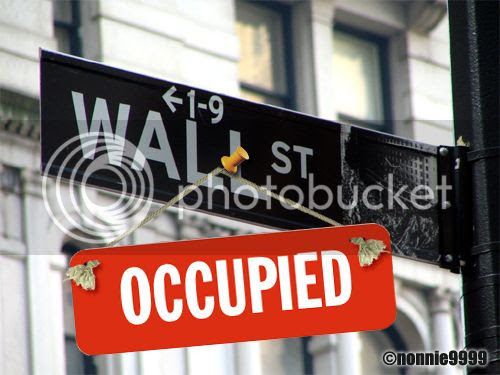 
I've seen this movie before. This is the sequel to Anonymous vs. Scientology and it's recycling the first film's plot, but with a bigger budget, more special effects, and a group of villains who are less comic, better known, and more dangerous. At this stage of the protests against Scientology, the long-time anti-Scientologist activists discovered Anonymous and found a way to jump in front of the movement. The same thing is happening here, with Michael Moore and others realizing that there is now a mob they can get in front of and (pretend to) lead. In reality, they're following from the front, which is the opposite of leading from behind.

As for how the first movie ended, it resulted in opening Scientology to reporters investigating the organization like it hadn't seen in a long time and tarnishing its reputation among the young. It also gave the members of Anonymous a taste of organizing and a realization that they can take on something bigger than themselves. Now they're ready for something bigger than a fringe cult that runs themselves like a business. Whether they're up to this task is another question.

As for how this installment of the franchise ends, stay tuned. They may be rehashing the plot so far, but there is no script.

One year later, the participants may no longer be camping out in Zuccotti Park, but they did turn economic inequality into a major subject of conversation, just like Operation Chanology exposed Scientology to public scrutiny. Also, I find it an appropriate coincidence that the 47% video, the highlight of which was Romney addressing the question of inequality in a very condescending way, was released on September 17th, the anniversary of the beginning of Occupy Wall Street.

Follow over the jump to read what Canada's Globe and Mail made of Occupy Wall Street's legacy.


The comeback of Occupy Wall Street


If you thought Occupy Wall Street had disappeared, think again. After months of internal wrangling and low morale, the campaign is staging a return to the spotlight. Sept. 17 is the first anniversary of the movement that took over a slice of downtown Manhattan for two months, spawned offshoots in cities from Toronto to Hong Kong, and coined its own slogan to direct attention to inequality: “We are the 99 per cent.”

For all the energy generated by the protests, the movement never made the leap into the political mainstream. Amorphous and leaderless by design, Occupy Wall Street includes people who are pushing for radical change to the financial system but also many who believe it is simply beyond repair. Absent a set of concrete demands and common goals, it remains difficult to categorize and ineffective as a rallying point for large numbers of people.

Yet it’s too early to write an epitaph. For one thing, two of the main problems the movement referenced – income inequality and the influence of money in politics – have only become more pronounced over the past year. There have also been interesting, if embryonic, things happening under the surface. Occupy-associated groups have met with U.S. regulators on financial reform, helped to fight foreclosures, supported union drives, and are close to forming their own bank.

So far, the chief accomplishment of Occupy Wall Street has been to attract media and policy attention to the broader issue of inequality, a focus that remained long after the police cleared away the tents in Zuccotti Park (which happens to be owned by Canada’s Brookfield Office Properties) last November. Earlier this week, the U.S. census released data showing that median household income in the country, adjusted for inflation, fell in 2011, while a measure of income inequality increased.

Finally, here are the rest of my posts about Occupy Wall Street from my first until I started blogging about Occupy Detroit.