In the spirit of ABC News panel on presidential debates, Rock the Vote in Madison, Wisconsin, today and Last U.S. Senate debate in Virginia tonight plus state of the race, here are two more press release about elections I included in the tip jar of Overnight News Digest: Science Saturday (2012 Nobel Prizes edition), followed by what Nate Silver had to say about this topic on Saturday.

Purdue University: Prof: Latino electorate largest ever; yet expect influence from those not voting
October 10, 2012


WEST LAFAYETTE, Ind. — The large Latino electorate is expected to play a key role in this year's presidential election, but so will the influence of Latinos who don't have U.S. voting rights, says a Purdue University political science expert.

"Voting is just one way actors in a democratic society can make a difference, and interest in politics and party politics comes well before naturalization," says James McCann, a professor of political science who is leading a large study to follow Latino interest and civic engagement in recent presidential elections. "We see a lot of civic interest before someone acquires voting rights, and it's important to track this too. Just like economists track aspects of the undocumented workforce, we need to gauge and model similar effects in politics."

His research focuses on Latinos who don't have citizens' rights. About 40 percent of Latino adults in the United States are noncitizens, and the Pew Hispanic Center recently reported that a record 24 million Latinos are eligible to vote.

"The Republican Party made some strides with the Latino electorate when George W. Bush ran for office because he was from the southwest and understood the Latino culture, but Republican candidates have been losing ground since then," says James McCann, professor of political science who focuses on public opinion and Latino political participation. "The discourse during this year's Republican primary contests, as the potential nominees competed for support among grassroots activists, was alienating to many Latino voters. Mitt Romney's statement about 'self-deportation' for immigrants set a very negative tone that can alienate Latino voters."

The Latino electorate favored Democratic candidate Barack Obama in the 2008 election when he won 67 percent of the vote and the Republican candidate received 31 percent. McCann says he expects that gap to grow even more this election.

The Latino vote is becoming important enough that Nate Silver devoted a major portion of a post to the topic: Oct. 13: Arizona and the Spanish-Speaking Vote. Follow over the jump for the relevant excerpt.


Are Polls Underestimating Obama’s Hispanic Vote?
...
In the past couple of elections, polls have underestimated Democrats’ standing in states with heavy Hispanic populations. (The two senate races that the FiveThirtyEight forecast called incorrectly in 2010 — Nevada and Colorado — are both states with a healthy number of Hispanic voters.)

This may be because many polling firms that conduct interviews only in English miss some Hispanic voters who are more comfortable speaking Spanish. According to Matt Barreto of the polling firm Latino Decisions, which conducts bilingual interviews, primarily Spanish-speaking Hispanic voters are more likely to vote Democratic than those who have more English fluency.

Polling firms such as Latino Decisions that have conducted interviews in Spanish have shown Mr. Obama with a larger advantage among Hispanic voters than those which interview in English only. The most recent Latino Decisions poll, for example, had Mr. Obama ahead 72-20 among Hispanic voters. This poll is not an outlier; other polling firms that have conducted Spanish-language interviews have found similar results.

The countervailing factor is that Hispanics who speak mostly Spanish are unlikely to be registered or likely to vote. Still, this factor could make some difference in states with heavy Hispanic populations, like Arizona.

How much of an impact might this make? On Saturday, I ran an alternate version of the FiveThirtyEight simulation in which I assumed that Mr. Obama would in fact win Hispanic voters by 50 percentage points, his edge in the Latino Decisions poll, as opposed to the roughly 35-point margin he’s had on average in polls that were conducted in English only.

I scaled this adjustment based on the share of Hispanic voters in 2008 exit polls. So, for example, Mr. Obama gained a net of 3 points in Texas because of the adjustment, but almost nothing in Kentucky.

Even with this adjustment, Mr. Obama was far from being favored in Arizona. Instead, the model gave him just an 8 percent chance of winning there, although this was better than the 4 percent chance from the standard FiveThirtyEight model.

However, the adjustment increased Mr. Obama’s win probability in Colorado to 57 percent from 44 percent, in Florida to 53 percent from 35 percent, and in Nevada to 77 percent from 62 percent. It even helped him slightly in Virginia, where about 5 percent of voters identified as Hispanic in 2008 exit polls. 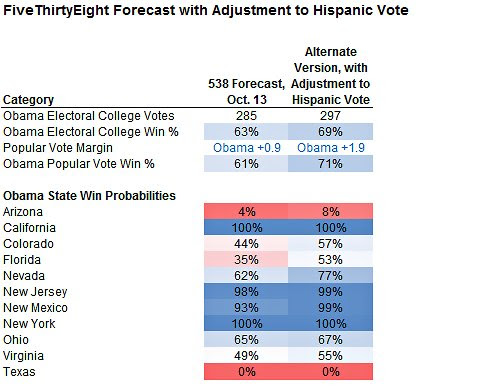 More of the Hispanic population is concentrated in noncompetitive states like Texas, California and New York. Thus, the increase in Mr. Obama’s Electoral College win probability was slightly smaller than increase in his probability of winning the popular vote, which rose to 71 percent from 61 percent.

This adjustment is speculative — as I mentioned, it isn’t clear how many primarily Spanish-speaking Hispanics will actually turn out to vote. And a few surveys do conduct interviews in Spanish.

I recommend the regular FiveThirtyEight model as providing the best overall forecast of the state of the race. There might be ways in which the polls could be underestimating Mr. Obama’s vote — but there are potentially other ways in which the surveys might be biased against Mr. Romney.

Still it’s the possibility that the polls are underestimating Mr. Obama’s performance among Hispanics that should be the concern for Mr. Romney in the Arizona poll — not the unlikely possibility that Arizona has suddenly become a swing state.