Consumer confidence up but mostly among Democrats

Last week had good economic news in the form of higher consumer confidence, both nationally and in a key swing state. First, the national news from the University of Michigan.


ANN ARBOR, Mich.—Consumer confidence improved substantially in September due to more favorable prospects for the national economy, according to University of Michigan economist Richard Curtin, director of the Thomson Reuters/University of Michigan Surveys of Consumers.
...
Consumers expect the economy to create more jobs in the year ahead, according to Curtin. The overall rise in confidence was aided by higher stock prices as well as rising home values.

However, the majority of consumers still anticipate very small wage gains and expect somewhat larger price increases during the year ahead, due largely to rising food prices. This means that half of all households anticipate declining living standards as their incomes fail to keep pace with inflation.

In addition to economic growth and more jobs, consumers have become more optimistic about the real estate market. I said it looks like the housing market has bottomed, and consumers seem to believe it.

That's good news for the nation as a whole. What about the news from a key swing state, Florida?


GAINESVILLE, Fla. — Florida’s September consumer confidence reached a post-recession high of 79 — up three points from a revised August reading of 76, according to a monthly University of Florida survey.

“The last time Florida consumer confidence hit 79 was in October 2007,” said Chris McCarty, director of UF’s Survey Research Center in the Bureau of Economic and Business Research. “At that time, confidence was on its way down as the housing crisis was getting under way. This month’s index comes at a time when the economy is still in recovery.”

The September survey showed increases in all five components that researchers use to assess the collective economic opinion of Floridians.

Even better, especially for President Obama. Rising consumer sentiment would make people more likely to vote for him and less likely to buy into the argument that they're worse off now than they were in 2008. The Florida consumer confidence index shows that people in the Sunshine State think they're better off.

Speaking of politics, what do people's political views have to do with their economic ones? Quite a bit, actually. 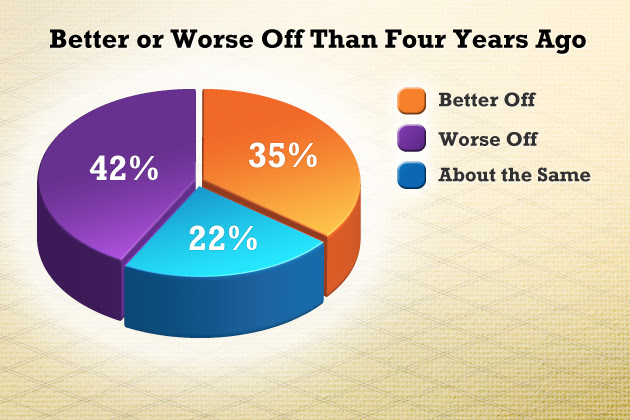 
While voters around the country report similar experiences with economic hardships like lost jobs and falling behind on mortgage payments, Democrats and Republicans differ significantly on their satisfaction with their overall well-being, The University of Connecticut/Hartford Courant Poll has found.

Party identification isn’t the only variable that shows disparities in how voters see their lives right now. The poll found that 78 percent of African-American likely voters say they’re better off today than four years ago, while only 26 percent of white voters said the same. And while 45 percent of likely voters who attend religious services once a week or more say they’re worse off today, just 31 percent of voters who never attend religious services have the same impression.

Looks like the Obama voters are the ones who are optimistic, while the Romney voters have become pessimists. I think both are confusing prospects of their presidential candidates with the economy, which Nate Silver has noted also.


It seems that Mr. Obama and Bill Clinton were able to persuade some voters in their speeches at the convention that there are silver linings in the economy. It is the most persuasive explanation for how subjective perceptions of the economy improved at a time when objective measurements of it had worsened.

But could improved consumer confidence actually translate into improved consumer spending, which could help stimulate the economic recovery? Or do measures of consumer sentiment become unreliable predictors of actual economic behavior once we’re this deep into an election cycle?

Some academic studies of this question find that improved consumer confidence actually may affect consumer behavior — even if the initial impetus for the change was rooted in political factors. Democrats might be going out to dinner a few more times this month — even if Republicans don’t.

On the other hand, Gallup’s tracking of self-reported consumer spending has not seen much of a change since the Democratic convention. Self-reported assessments of spending are not always reliable. But we’ll have to wait several more weeks until September data on retail sales is available, giving us a harder measure of how consumers are actually behaving.

These ambiguous relationships between political attitudes, economic attitudes and actual economic behavior are complicated. It isn’t necessarily so straightforward to say what constitutes the economic “fundamentals,” when those economic variables may be influenced in part by the political attitudes of consumers and businesses, along with fiscal and monetary policy.

However, I am especially wary of using sentiment-based measures like consumer confidence in elections analysis, and forecasting models that have done so have had extremely poor results when applied to real data. If you had an elections model based on horse-race polls and consumer confidence right now, you’d run the risk of double-counting Mr. Obama’s gains, since in this case the consumer confidence figures seemed to have been influenced by electoral politics more than the other way around.

Just the same, if Obama wins, then he can be the Confidence Fairy, not Willard the Rat, who actually thinks he is.

If it looks like I’m going to win, the markets will be happy. If it looks like the president’s going to win, the markets should not be terribly happy. It depends of course which markets you’re talking about, which types of commodities and so forth, but my own view is that if we win on November 6th, there will be a great deal of optimism about the future of this country. We’ll see capital come back and we’ll see — without actually doing anything — we’ll actually get a boost in the economy.

In effect, Romney was saying, “I am the confidence fairy!”

No, Willard, it doesn't look like it will be you playing that role. Obama will.
Posted by Pinku-Sensei at 12:44 AM