It's been three months since the previous installment of this series, The first year of Crazy Eddie's Motie News: Part 6 of several.


As for what I'll write about next, there are the two other posts I wrote especially for Kunstler's readers that were built around New York Times articles. Both of them discuss Detroit as a tourist destination, a topic I return to occasionally. There's also a post about Dominionism and what they really believe. Finally, there are posts that were in the top ten between January 1st and March 21st, but which fell out by the time I compiled the list. That should take care of the series.

That post about Dominionism was really about the behavior of the audience at the GOP debates, as I mentioned in Ron Paul rides off into the sunset.


The most popular of them was Tell me now, which deity do the Dominionists really worship?, which ended up being the seventh most popular post of the first year of this blog, with 310 page views and two comments as of March 31st.** That was the one in which I quoted AmericaBlog's description of a Think Progress video of a GOP debate, which read:

... **It now has 315 page views and four comments. That reminds me, it's time to do that article's retrospective, but not in this post.

It's time to continue, especially since it turns out it's on topic for today, the day of the last debate between major party candidates.


This post was a follow-up to Kunstler thinks the Left is ignoring Dominionism; I tell him we're not, which I crossposted to Daily Kos as Rick Perry's Dominionism is getting noticed and got a much better reception there than here at Crazy Eddie's Motie News. As I documented in Meta on Rick Perry's Dominionism, it ended up being the fourth diary about Dominionism to reach the recommended list there in two-day stretch. Not bad for an entry for my personal blog I wrote to do something useful during a bout of insomnia after getting only two hours of sleep, then posting it as a diary on a whim.

The next week, Kunstler gave me another opening by mentioning Huitzilopotchli and I took it.


Remember last week's comment about Ponzi Perry's being a Dominionist? A friend of mine has a wild hair of an idea that ties that idea together with your comments about Huitzilopochtli. My buddy thinks that while the Dominionists think they're worshiping Yahweh, Jesus, and the Holy Spirit, they've been hoodwinked, and Huitzilopochtli and a couple of his buddies from the Aztec pantheon are receiving the Dominionists' devotion instead. That could explain why the biggest applause line of the night during last week's Republican debate was when Ponzi Perry mentioned executing more prisoners than any other sitting governor. It was the kind of sacrifice the deity they really worship would approve of. Jesus, not so much.

I promoted that nutty idea at Kunstler's blog, and it sold, catapulting up to seventh place in a week (it's now tenth). A week later, I found the perfect cartoon for "Which deity do Dominionists worship?" 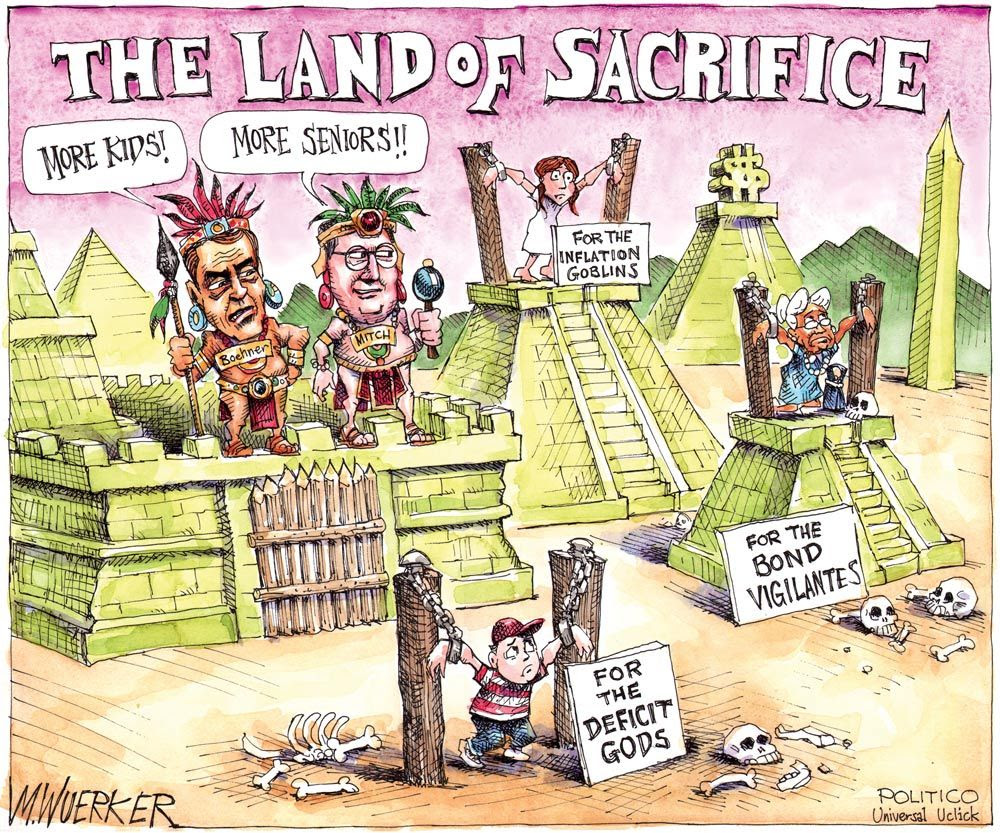 The Land of Sacrifice. More kids! More seniors!! For the inflation goblins. For the bond vigilantes. For the deficit gods.

The bloodthirsty behavior extended from the top on down, although the the audiences at the GOP primary debates pointed out that the base enjoyed cruelty. I wasn't the only one to notice it, either. Next Media Animation did in The Republican base is becoming an issue. Here's their video.


The GOP primary debates give the candidates a chance to become known to the public. The forums have revealed much about the Republican base as well.

For the GOP's extreme, it seems there is no room for nuance between policy and principle. Will the audience outbursts alienate the rest of America?

Yet at least one GOP candidate has held his ground. His positions might not be popular with the base, but they are sure to look good with a wider constituency.

Yet one wonders: is there any limit to what the GOP primary debate audience will cheer or boo?

The GOP hope to take America forward. But as the candidates pander to their base, they risk making the Republicans look like a party of the past.

Those weren't the only posts about GOP debates to make an impression, either here or at Daily Kos. One of the many entries I posted about the GOP debate here in Michigan also cracked the top ten, although briefly, during the primary season, as people Googled it after every debate: Video clips from last night's Republican debate. Unfortunately, the clip of Perry being unable to name a third federal department to eliminate got pulled down, but there is a funnier version still up in Rick Perry blowing his answer to the Jeopardy theme. Those of you searching for videos from tonight's debate, thank me. I now have all the good links in one place for you.