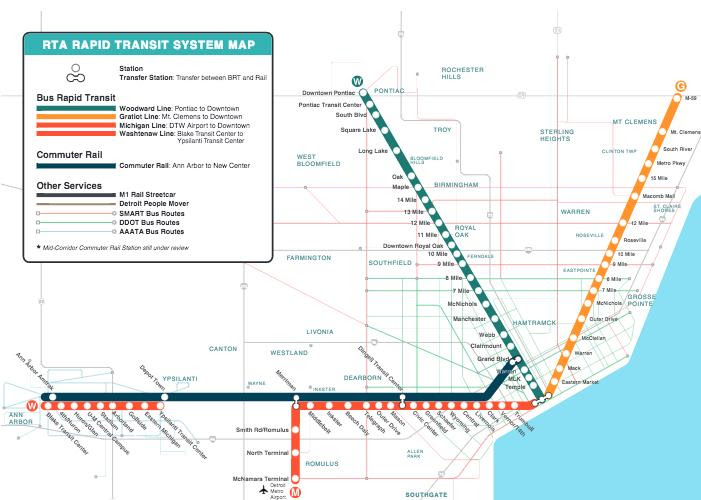 As I foreshadowed in First carpool lane in Michigan as part of I-75 upgrade, the ballot measure to fund increased regional mass transit that I mentioned at the end of Clawson 4th of July Parade will be on the ballot.

On the bus ride back to the start of the parade, I ran into advocates for the Regional rapid transit plan for Metro Detroit.  The taxes to support the plan will likely be on the November ballot.  Look for me to cover that issue at least once this fall.

The Detroit Metro Times has the story in Welp, it's official: this November you can vote on regional transportation.

On Tuesday clerks of Macomb, Oakland, Washtenaw and Wayne counties accepted the controversial proposal to fund the Regional Transit Authority of Southeast Michigan’s (RTA) Regional Master Transit Plan. This acceptance — which came at the eleventh hour — means voters can now hit the polls this November and weigh in on a plan that aims to tackle many of the region's unaddressed transit issues.

"This is the opportunity Southeast Michigan residents have been waiting for – the opportunity to finally connect Macomb, Oakland, Washtenaw and Wayne counties," Kelly Rossman-McKinney, a spokesperson for A Coalition for Transit (ACT) said in a statement Tuesday.

The proposal would authorize the Regional Transit Authority of Southeast Michigan (RTA) to levy within Macomb, Oakland, Washtenaw, and Wayne counties a property tax assessment:
If this new additional assessment is approved and levied, revenue will be disbursed to the RTA. It is estimated that $160,907,285 will be collected in the first year. Should this assessment be approved?

Tom Watkins, President and CEO of the Detroit Wayne Mental Health Authority, wasted no time endorsing the millage.  Two days after the measure was put on the ballot he wrote OPINION: Get metro area moving: Vote 'yes' on public transit in The Press&Guide of Dearborn.

Every elected official, civic, business, labor and religious leader should be promoting a "yes" vote on Nov. 8 to move Michigan forward by building a much-needed regional transit system.

An investment in mobility in the four-county region (Wayne, Macomb, Oakland and Washtenaw plus the City of Detroit) is an investment in our collective future. The region’s leaders have put forth a proposal to raise tax dollars for a sensible regional transit initiative. It is truly a positive step to see the leadership of Southeast Michigan come together to jump start our region.
...
This is an opportunity to vote your self-interest and help Michigan catch up with the rest of world by providing a viable public transit system.

Help drive our region boldly into the future.

I couldn't have said it any better myself.  May this ballot measure be as successful as Renew for the Zoo, which was renewed overwhelmingly.
Posted by Pinku-Sensei at 8:00 AM