After blogging about Black Friday and Small Business Saturday, I would be remiss if I didn't go for the trifecta and write about Cyber Monday.


EAST LANSING, Mich. — A Michigan State University professor said this year’s holiday shopping outlook is “positive,” especially when it comes to online sales, which are expected to increase by about 12 percent compared to last year.

Patricia Huddleston, a professor of advertising, public relations and retailing, said online sales should increase to about $96 billion this year.

I wonder if Huddleston was misquoted or confused, as comScore's press release includes both a higher percentage increase and lower sales numbers.


For the holiday season-to-date, $10.1 billion has been spent online, marking a 16-percent increase versus the corresponding days last year. Thursday, November 8 has been the heaviest online spending day of the season to date at $829 million.
...
The official comScore 2012 holiday season forecast is that online retail spending for the November – December period will reach $43.4 billion, representing a 17-percent gain versus year ago. This strong growth rate represents an improvement compared to last season’s 15-percent increase. It is also far ahead of the retail industry’s expectation for a 4.1-percent increase in consumers’ overall spending this holiday season.

For the week-by-week sales so far, along with a comparison to previous years, see the figure below, which shows year-to-year increases ever since 2009. 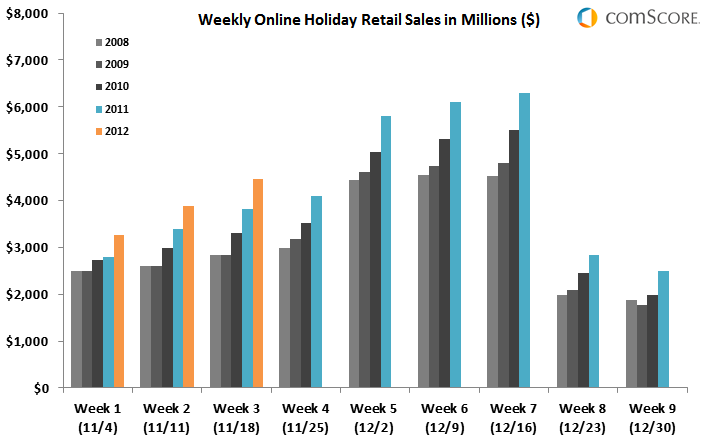 Those are for the shopping season as a whole.  What about Cyber Monday in particular?  Follow over the jump to find out.

All sources are predicting a sales record for the day; the question is by how much over last year's $1.25 billion.  The majority of news outlets, including USA Today, Reuters (via NewsDaily), CNet, and Atlanta Journal-Constitution are among the sources quoting comScore's estimate of $1.5 billion for today.  At the high end of the range, both Newsday and The Jersey Journal think sales might reach $2 billion.  I think that's optimistic, and so does Reuters.


"Cyber Monday will be a big day, but not as much of a big day as it has been in the past," said Mia Shernoff, executive vice president for Chase Paymentech, a payment-processing unit of J.P. Morgan Chase & Co.. "Faster broadband Internet connections in the office used to drive this. But now many consumers have faster connections at home and smart phones and tablets - they don't have to wait."

Then again, optimism might be warranted, as Black Friday's online sales broke $1 billion for the first time, as Reuters reported.


Online sales jumped 26 percent on Black Friday to $1.04 billion from sales of $816 million on the corresponding day last year, according to comScore data.

In store sales, however, declined.

Part of that loss came from online sales, but part may also be from stores opening on Thanksgiving afternoon and evening, as the University of Michigan explained in Black Friday store hours gobble into Thanksgiving.


What's behind the move of turning Black Friday into Black Thursday Evening? Growing online sales and a need to grab market share in a crowded field, says Follett Carter, marketing lecturer at the University of Michigan's Ross School of Business.

"I think you are going to see retail holiday creep, and that's pressured by online sales," Carter said. "The Amazons of the world, especially with services like Amazon Prime, have become more problematic for brick-and-mortar retailers. So how do they differentiate themselves? Having evening hours on Thanksgiving was a logical move."

So far, the numbers are making the sales predictions look good.  What about the other predictions from MSU's Huddleston?


“Technology items and gift cards should do particularly well this year,” she said, “but all categories – apparel, cookware, toys, to name a few – are expected to see increases.”

CNet showed that she was close, as her first choice for runner-up won the day.


Historically the No. 2 sales category on Black Friday, apparel and accessories accounted for more than a quarter of all dollars spent online, overtaking last year's No. 1 -- computer hardware. As adoption of tablets and smartphones continues to grow, sales of digital content and subscriptions achieved the greatest sales growth, logging a 29 percent increase over last year.


Digital content and subscriptions, including e-books, digital music and video, was the fastest-growing retail category online, with sales up 29 percent versus Black Friday last year, according to comScore data.

Huddleston made another prediction about the impact of smartphones.


[S]hoppers are more dependent on their mobile devices.

“According to Google research,” Huddleston said, “four out of five shoppers will use smart phones for price comparison, store locations and to order online.”


A big source of online shopping growth this holiday season has come from increased use of smart phones, which let people buy online even when they are in physical stores, and by tablet computers, which have spurred more online shopping in the evenings, Wingo and others said.

Mobile devices accounted for 26 percent of visits to retail websites and 16 percent of purchases on Black Friday. That was up from 18.1 percent and 10.3 percent, respectively, on the same day last year, according to International Business Machines, which analyzes online traffic and transactions from 500 U.S. retailers.

More than 20 million shoppers plan to use mobile devices on Cyber Monday, up from 17.8 million a year ago, the NRF said.

Consumers' ability to access the web inside the store has had an effect on retailers.


While mobile devices may be good for sales, they may not be so good for retail profit margins. Smart phones give shoppers real-time access to product prices online, potentially exacerbating the usual holiday discounting and price wars.

Black Friday online transactions jumped almost 30 percent, but the average ticket price was down more than 11 percent, according to Chase Paymentech, which reports data from its 50 largest e-commerce merchant clients.

"It's driving prices down," Shernoff said. "Consumers are checking prices in stores and showing the retailer, and the retailer will succumb to the lowest price online so they don't lose the consumer."

Crazy Eddie the Motie says, "Welcome to 'Science Fiction Times.'  Do we ever have a deal for you!"
Posted by Pinku-Sensei at 12:01 AM