It's not just Senator Schumer who supports science. This story from Overnight News Digest: Science Saturday (2012 Nobel Prizes edition) shows that New York's other senator does, too! 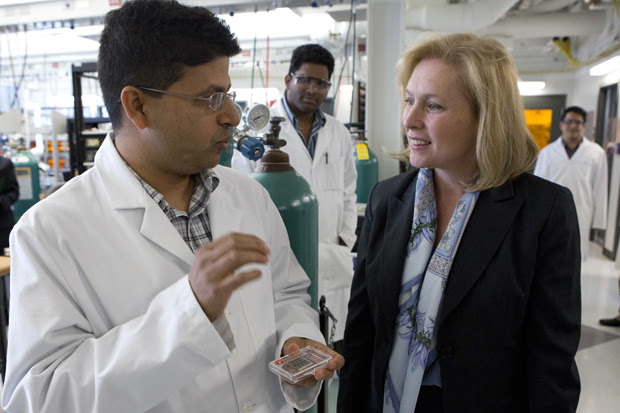 
U.S. Sen. Kirsten Gillibrand on Oct. 8 visited Binghamton University to announce the America Innovates Act — federal legislation to spur the growth of new science and technology jobs in the Southern Tier and across New York state. The bill is designed to help scientists and researchers secure valuable resources and training to help commercialize their discoveries and create marketable products, new high-tech companies and jobs.

“High-tech innovation is the future of our economy and Binghamton University is paving the way. Your students and researchers are doing incredible things,” said Gillibrand, after touring the Center for Autonomous Solar Power at the University’s Innovative Technologies Complex. “Many researchers lack the resources to turn their scientific breakthroughs into jobs. We need to bridge that disconnect. I know we can have a thriving economy for years to come and want to accelerate the process to bring ventures to market.”

“This legislation will help us do what we do – better,” said Binghamton University President Harvey Stenger. “It will help us educate, innovate and improve community outreach through economic development. Our faculty are working on world-changing technology and this act will spur new high-paying, high-skilled jobs in the Southern Tier.”

This isn't the only instance of Gillibrand supporting science. When I searched Google Images for 'Gillibrand+science,' I found lots of photos of her hanging around people in lab coats. Looks like she'd have my vote if I lived in New York, too--not that she needs it. According to Nate Silver, she has a 100% chance of being re-elected.
Posted by Pinku-Sensei at 12:01 AM