I left the following program note over at Kunstler's blog Monday.


As for what the rest of the week brings, that's already programmed in. Just after Midnight tonight, I mark yet another week of showing my class "The End of Suburbia" featuring our host with a post in which I leave answers for my students as links and Easter Eggs while discussing "Dispatches from the FEMA camps" by Metro Detroit's own Jeff Wattrick, who writes for Wonkette. Wednesday and Thursday, I have food posts planned for Thanksgiving. On Black Friday, I have Buy Nothing Day and Boycott Walmart combined. The week ends with Small Business Saturday, which promotes the kinds of local retail outlets needed for a resilient, post-peak-oil future.

I already took care of the first promised entry with Sustainability through the looking glass with Jeff Wattrick of Wonkette. It's time to continue in the same spirit with another post featuring a worksheet my students fill out for a movie. In keeping with the food theme, it's for Food, Inc., the book of which I blogged about in Food Fight! Thoughts on liberalism and conservatism inspired by the Preface to Food, Inc.*

As I wrote in Showing my students "End of Suburbia" again tonight:


Over the fold is the worksheet I've been using for the past three years. See how many of my questions about the movie you can answer.


In this lab session, you will watch Food, Inc., a 2009 American documentary film directed by Emmy Award-winning filmmaker Robert Kenner.  The film examines large-scale agricultural food production in the United States, concluding that the meat and vegetables produced by this type of economic enterprise have many hidden costs and are unhealthy and environmentally harmful. The film is narrated by Michael Pollan and Eric Schlosser, two long-time critics of the industrial production of food. The documentary has generated extensive controversy in that it was heavily criticized by large American corporations engaged in industrial food production.*


After the video is over, find the best examples you saw of each of the following from the film and write them in the blanks.


1.     According to the first narrator (Michael Pollan), is our food being produced on traditional farms or in what amounts to a factory?

2.    For which agricultural products is McDonalds the largest or one of the largest customers?  List at least five. 7.    How many bushels/acre of corn were grown 100 years ago in the U.S.?  How many now?  Who does Michael Pollan credit for this increase?

9.    How did corporations and government encourage the production of corn?


10. Name at least five products made from corn.  Which one did you find the most surprising?

11.  How did the growing of cheap corn make cheap meat possible?

13. How did the feeding of corn to cattle along with other raising and slaughtering practices lead to evolution and spread of a dangerous strain of E. coli?
14. What effects has the spread of hemorrhagic E. coli had on the food supply?  List at least three examples.


15. Summarize the story of Kevin Kowalcyk and Kevin’s Bill.


17. What dilemma does the Gonzales family face when balancing money and food?


19. How does Joel Salatin, owner-operator of Polyface Farms, describe the advantages and disadvantages of industrial agriculture?


20.What advantages does he give for his methods of organic farming?  He’ll explain more after you watch the material for questions 21-23.

22.Does the portrayal of the working and living conditions of the Smithfield meatpackers support the opinion of the owner of Polyface Farms that you described in question 21?
23.What effects did production of cheap corn have on the corn farmers of Mexico?  List at least two.

Reminder: there are more answers for 19 and 20 coming.


24.How do the views of the owner of Polyface Farms and that of the former owner of Stonyfield Farm differ when it comes to growth and selling to Wal-Mart?

25.How many people could the average American farmer feed in 1900?  How many today?

26.What has Monsanto done to promote use of their soybeans and stop seed saving?  List at least three examples.

27.List at least five government officials who were connected to Monsanto and other food producers.  What effect does the narrator think this has had on regulation of food production?

28.How many gallons of oil are needed to bring a steer to market?

29.What effects have global food prices, both high and low, had on food production outside of the U.S.?

30. What can the average consumer do to change the system? 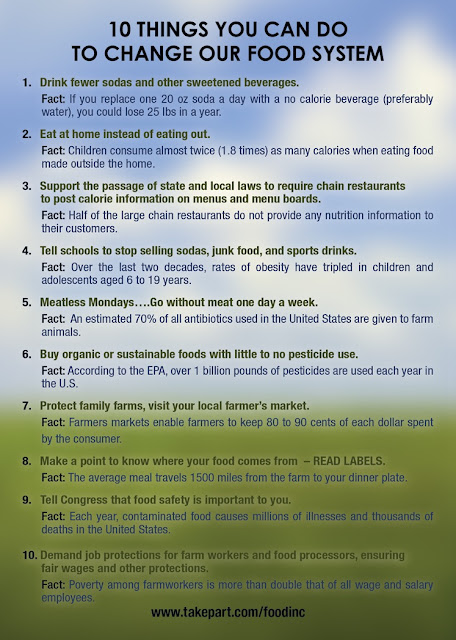 No, the images don't come with the worksheet.  I just added them here to see if I could get a feature to work as well as add visual interest to the entry.  According to the preview, it does.

*I promised I would resume blogging about the book, first in James Howard Kunstler swims against the stream on marriage equality and then in Nablopomo for August: Fiction. It only took me 15 months. It could be worse. I promised I'd write a series about andelku's Contemplating the Hedgehog. That was 19 months ago.
Posted by Pinku-Sensei at 12:01 AM