Nobel Prizes in the sciences

The rest of the winners were not called this year, although the economics prize was awarded to someone who was forecast to win last year.  He deserves an entry of his own later.

First, here's an excerpt from the New York Times article about this year's winners" Economists Clash on Theory, but Will Still Share the Nobel.

WASHINGTON — The economist Robert J. Shiller in 2005 described the rapid rise of housing prices as a bubble and warned that prices could fall by 40 percent.

Five years later, with home prices well on the way to fulfilling Mr. Shiller’s prediction, the economist Eugene F. Fama said he still did not believe there had been a bubble.

“I don’t even know what a bubble means,” said Mr. Fama, the author of the theory that asset prices perfectly reflect all available information. “These words have become popular. I don’t think they have any meaning.”

The two men, leading proponents of opposing views about the rationality of financial markets — a dispute with important implications for investment strategy, financial regulation and economic policy — were joined in unlikely union Monday as winners of the Nobel Memorial Prize in Economic Science.

Mr. Fama’s seminal theory of rational, efficient markets inspired the rise of index funds and contributed to the decline of financial regulation. Mr. Shiller, perhaps his most influential critic, carefully assembled evidence of irrational, inefficient behavior and gained a measure of fame by predicting the fall of stock prices in 2000 as well as the housing crash that began in 2006.

They will share the award with a third American economist, Lars Peter Hansen, who developed a method of statistical analysis to evaluate theories about price movements that is now widely used by other social scientists.

The three economists, who worked independently, were described as collectively illuminating the workings of financial markets by showing that stock and bond prices move unpredictably in the short term but with greater predictability over longer periods. The prize committee said these findings showed that markets were moved by a mix of rational calculus and irrational behavior.

Here's what I wrote about Thomson Reuters forecasting a win for Shiller last year.

The most fireworks over the winner will be over the Laureate for the Economics Prize, at least among the people on your list. Some political faction will make hay over the choice, while someone else's ox will be gored. People on the political Left should root for Atkinson and Deaton, while those on the Right should root for Ross. That would seem to make Shiller a safe choice, right? Don't count on it. He told the truth about the housing bubble back when people on the Right were denying there was any such thing.
...
Controversy aside, I wouldn't mind Shiller winning the economics prize. I'm more familiar with him than the others, and I actually use his work here from time to time--like right now. Here's the latest Case-Shiller Housing Index, courtesy of Calculated Risk (link updated--P-S). 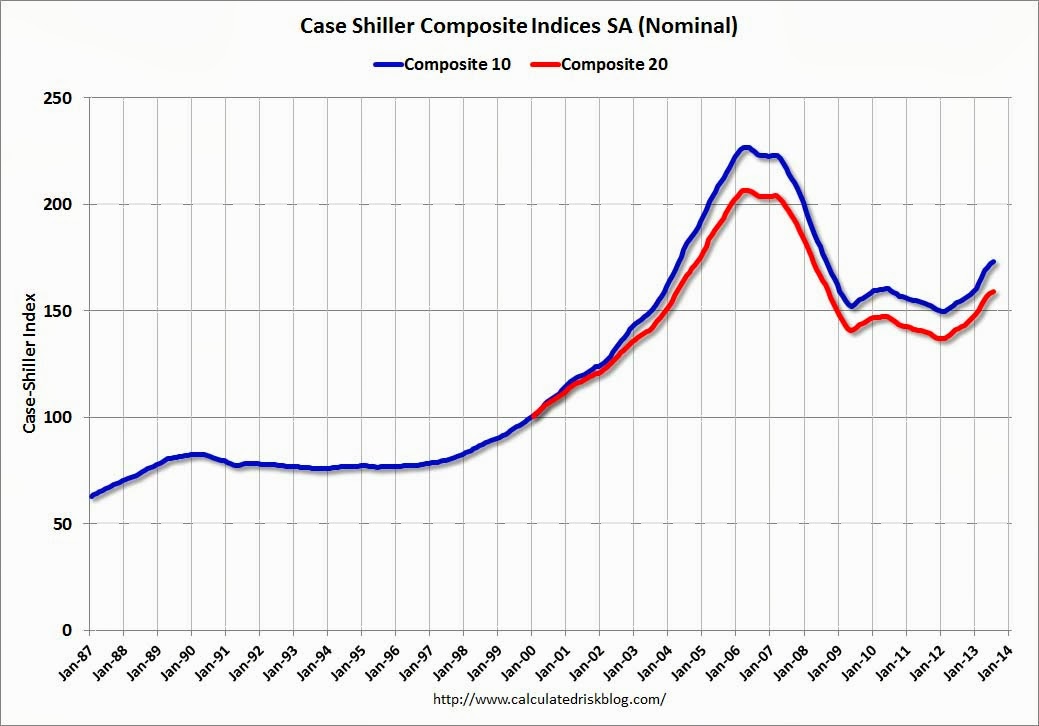 As I wrote last year, housing prices have indeed bottomed out and are now rising.  Good news, everyone!

Finally, before I forget, congratulations Professor Shiller.  You're now up there with Krugman and Stiglitz.  That's great company to keep.
Posted by Pinku-Sensei at 10:20 AM