The smart money is on Rubio to beat Trump 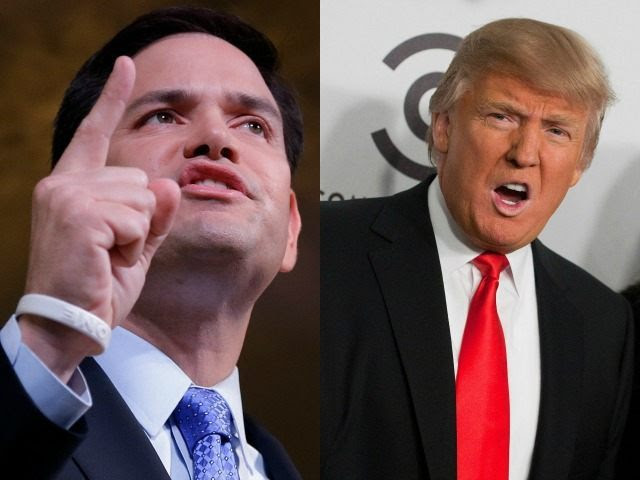 I opened Bye, Bobby! Jindal drops out with dueling observations on the state of the GOP field.


Kunstler remarked on the state of the campaign at his blog yesterday.


The cowardice in the college executive suites is mirrored in our national politics, where no persons of real standing will dare step forward to oppose the juggernaut of Hillery-the-Grifter, or take on the clowning Donald Trump on the grounds of his sheer mental unfittedness to lead a government.

I disagreed with him about the Republicans being unwilling to take on Trump.*


There are plenty of people with stature in the Republican Party trying to dislodge Trump and Carson from the top two spots.   Off the top of my head, I count four current senators, three current governors, a former senator, and four former governors, along with a former CEO of a Fortune 500 corporation, all trying to beat that "immigrant-bashing carnival barker" and his competitor Doctor Pyramid.  They're just not succeeding at it.

That was only half of what I had to say on the topic of Republicans taking on Trump.  Here's the rest, which I promised to use in the comments to Record page views, comments, and 100th follower: Monthly meta for October 2015.


Right now, the smart money is on Rubio, as PredictWise's aggregate of betting markets gives him a 47% chance of winning the nomination.  Trump may be in second, but he's well behind at 19%.  Then comes Cruz at 13% and Bush at 10%.  The rest of the field, including Carson, is in single digits.  Let's see if the people putting their money where their mouths are end up being right or losing their shirts.

Since last Monday, those odds have moved.  Rubio is still at 47%, while Trump and Cruz have both gone up to 22% and 16% respectively.  Bush is still at 10%, while Christie is hanging on at 4% and Carson has fallen to 2%.  The "smart money" among gamblers may think that Rubio is the most likely to win the nomination, but they are taking both Trump and Cruz more seriously.  That last is not good news.

Those placing bets on the candidates aren't alone in supporting Rubio.  FiveThirtyEight wrote The Republican Establishment Inches Toward Marco Rubio earlier this month and illustrated it with the following graph.

Since then, Rubio has moved into undisputed second place in endorsement points with 29, including one endorsement just yesterday from Representative Jaime Herrera Beutler of Washington.  He didn't gain ground on Jeb, though, as he got one from Mike Bishop of Michigan.**  Still, Rubio is probably the best candidate to do what both Kunstler and Michael Tomasky of Politico The Daily Beast think needs to be done.  Yesterday, Tomasky asked Who in GOP Will Finally Stop Trump?


Who in the Republican Party is going to step up here? Because this is A Moment for the GOP, make no mistake. It’s a historical moment, and when your leading candidate is joking about his supporters beating people up at rallies and musing about religious ID cards for around (ahem) 6 million of your citizens, it’s time to say something.

What he's hoping for is something along the lines of Margaret Chase Smith's "Declaration of Conscience."


“As a Republican, I say to my colleagues on this side of the aisle that the Republican Party faces a challenge today that is not unlike the challenge which it faced back in Lincoln’s day. The Republican Party so successfully met that challenge that it emerged from the Civil War as the champion of a united nation—in addition to being a party which unrelentingly fought loose spending and loose programs.”

“The Democratic administration has greatly lost the confidence of the American people… Yet to displace it with a Republican regime embracing a philosophy that lacks political integrity or intellectual honesty would prove equally disastrous to the nation. The nation sorely needs a Republican victory. But I do not want to see the Republican Party ride to political victory on the Four Horsemen of Calumny—Fear, Ignorance, Bigotry, and Smear.”

"The Four Horsemen of Calumny—Fear, Ignorance, Bigotry, and Smear"--I like that so much that I'll use it.

Unfortunately, Tomasky is not optimistic about the strength of the response to Trump.


I would suspect that this week we’ll start to see a little of this. Marco Rubio might make a statement that’s very carefully worded, as most of his statements are. Lindsey Graham may have it in him to say something interesting and semi-honest. But for the most part, I’d suspect that what we’re going to hear will be the rhetorical equivalent of wallpaper—they’re going to try to cover up the ugly exposed surface and nothing more.

And why would they do more? If they admit that Trump is a fascist, they’re calling one-third of their voters fascist. Will they do that? And this predicament raises the interesting question of how one-third of their voters came to admire a neo-fascist and open racist in the first place. Gee, it can’t have anything to do with the kind of rhetoric and “harmless jokes” about the current president and about the 47 percent that Republican leaders have winked at for seven years, can it?

The answers are no and yes, which means the candidates and leaders won't push back too hard.  Sigh.  Too bad, as Godwin's Law does not apply when one is talking about actual fascists.

*I'll return to the other half about Hillary Clinton and the Democrats later.

**That's an opportunity for a Examiner.com article.
Posted by Pinku-Sensei at 10:29 AM