Speculative fiction on TV in the 2017 Teen Choice Awards

The Teen Choice awards are celebrating the best films, shows, and actors this year, and it looks like voting for a favorite is going to be tougher than ever…

In the first wave of Teen Choice Awards Nominations, categories such as Choice Comedy Show, Choice Action Film, Choice TV Actor and Actress, and many more have all been announced, and trust me when I say that when I break this down for you, it is NOT going to be easy deciding who should take home that coveted Teen Choice Surfboard in any of the categories.
...
The TV categories are also filled the brim with some of our favorite shows, with “Arrow”, “Supergirl” and “The Flash” all nominated for Choice Action TV Show, and “Riverdale”, “This is Us” and “Pretty Little Liars” all nominated for Choice Drama TV Show. And speaking of “Pretty Little Liars”, literally all of the liars--Troian, Sasha, Ashley, Lucy, AND Shay--are ALL battling it out for Choice TV Drama actress this year, so that should definitely make for an interesting, and hopefully not awkward, win!

Here are the TV nominees from Teen Vogue reordered to reflect the level of speculative fiction involved.

The defending champion, "Once Upon A Time," is not nominated, so the field is open.  Out of this slate, I would vote for "Stranger Things," the only one also nominated for an Emmy (19, actually), but I wouldn't put it past this electorate to vote in "Supernatural" or "Teen Wolf" instead.

The defending champion, Grant Gustin, is contending for Choice Action Actor, so the field is open again.  Out of this group, I'd vote for Jensen Ackles.  So might the teens.

Abigail Spencer, Timeless
Eliza Taylor, The 100
Emeraude Toubia, Shadowhunters: The Mortal Instruments
Jennifer Morrison, Once Upon A Time
Kat Graham, The Vampire Diaries
Lana Parrilla, Once Upon A Time

Lana Parrilla is the defending champion and my favorite, so at least the teens like her, too.  Otherwise, I'd vote for Jennifer Morrison or Abigail Spencer.

Now for the superheroes, who are competing as action shows, a new category this year.

Out of this group, I'd vote for "Gotham."  It's the one my wife and I watch and the most recognized superhero show at the Emmys with three nominations.  "Marvel's Agents of S.H.I.E.L.D." has one nomination, as does a series not on this list, "Marvel's Luke Cage."  However, I expect this electorate will vote for either "Supergirl" or "The Flash," the winners of Best Superhero Adaptation TV Series at the last two Saturn Awards, with the advantage going to "Supergirl."  As the image above shows, it has a Twitter campaign (apparently from either the CW network or the studio) working for it.  None of the rest of the superhero shows seem to.

As I wrote above, Grant Gustin is the defending Sci-Fi/Fantasy Actor, so he's the one I'd say is favored in this category.  The one fly in the ointment is the Twitter campaign for "Supergirl" I mentioned above.  That might sway voters.  As for me, I might favor Clayne Crawford.  He's a hoot in "Lethal Weapon."

Follow over the jump for the rest of the television nominees.

"Bob's Burgers" is the only show on this list also nominated for an Emmy, so it's the one I'd vote for.  However, I expect something more manic, like "Rick and Morty" or "Gravity Falls," will win instead.  Who knows, the name recognition of "Family Guy" might prevail.

Normally, I'd skip the Comedy category, except that "Jane the Virgin," my favorite comedy and a mild example of magical realism, is nominated.  Yes, that's the show I'd vote for.  I expect "Fuller House" will win instead.  I called it "a popular piece of crap" and predicted it would win Favorite Premium Comedy Series at the People's Choice Award last year.  It did.  It also won this category last year.

Again, I'm mentioning this category because of "Jane the Virgin."  I'd vote for Jaime Camil, who is hilarious.  However, I expect Anthony Anderson, who is the only one of the field also nominated for an Emmy, will win instead.

I'd vote for Gina Rodriguez, the eponymous "Jane the Virgin."  However, I expect Candace Cameron Bure, the defending champion, will get the surfboard again.  I'd rather have Rose McIver of "iZombie" win.  At least she's in a pure speculative fiction show.

The returning winner is "Pretty Little Lies," which I fully expect to repeat as champion one last time, as this is the final season for the show.  It's not my choice.  If I were to vote, it would be "Riverdale," "Empire," or "This is Us," in that order.  "Riverdale" is a Saturn Award winner and is getting a big push from either the network or studio on Twitter (see image below), while "Empire" and "This is Us" have Emmy nominations (one for "Empire," eleven for "This is Us").

Ian Harding is the defending champion and I expect him to win.  As for me, I'd vote for either Cole Sprouse or Jesse Williams, even though Milo Ventimiglia is the Emmy nominated actor.

Buffy all the way for me, but "Veronica Mars" might sneak by. 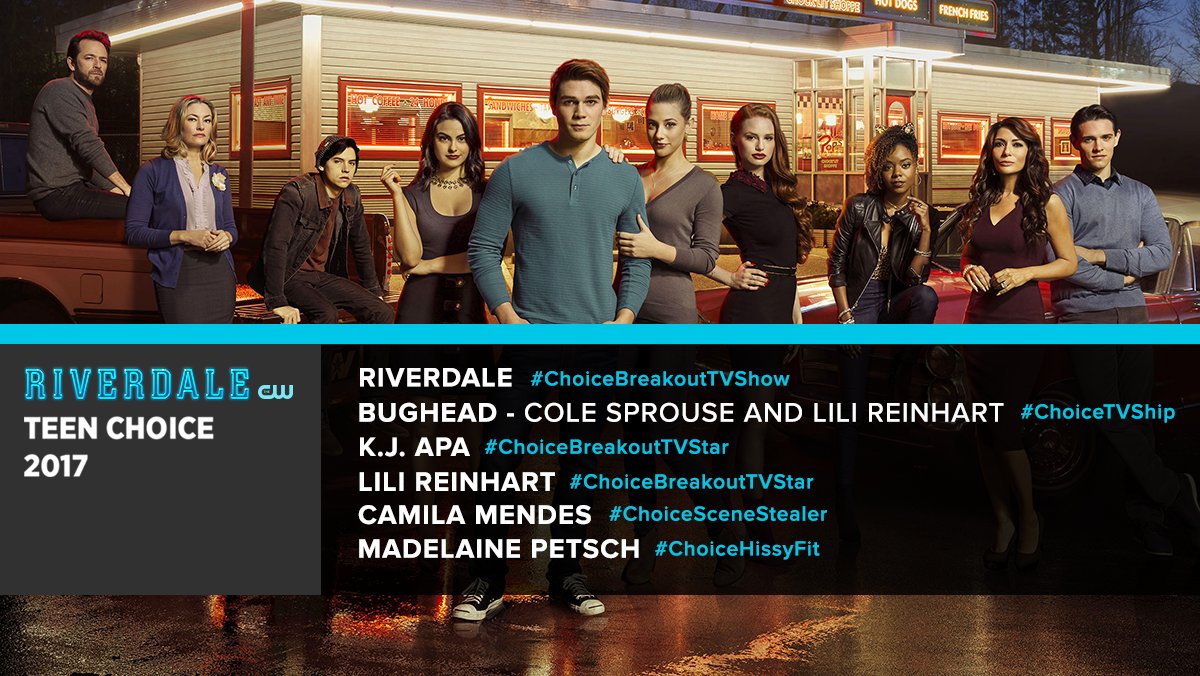 All of the above are from the first wave.  Clevver News also has a video report on the second wave of nominees.

The second wave of nominations for the 2017 Teen Choice Awards are here and we have the list of potential winners.
Get those votes ready because some of your favorite stars are nominated for a surfboard.
...
The nominees for Choice breakout TV Star are Chrissy Metz from This is Us, Finn Wolfhard from Stranger Things, K.J. Apa from Riverdale, Millie Bobby Brown from Stranger Things, and Ryan Destiny from Star. Then of course there is the Choice TV Ship category, let’s see if you know your couple ship names. BELLARKE from The 100 is nominated, BUGHEAD from Riverdale, EMISON from Pretty Little Liars, KARAMEL from Supergirl, MALEC from the Shadowhunters: The Mortal Instruments, and STYDIA from Teen Wolf.

That's not all.  Here is the list for the second wave of TV nominations from E!Online, reorder to suit my priorities.

I'm voting for "Stranger Things," which might be favored based on its win at the MTV Movie & TV Awards, but I wouldn't put it past "Riverdale" to sneak on by because of the Twitter campaign (see image above).

Oh, look, the winner of Best Younger TV Actor against the winner of The Breakthrough Performance Award at the Saturn Awards.  I'm going with Millie Bobbie Brown, who is also nominated for Supporting Actress in a Drama at the Emmy Awards.  However, the presence of Finn Wolfhard might split the "Stranger Things" vote, allowing either KJ Apa or Chrissy Metz to sneak on by.

I'll vote for "The 100" couple here, although I expect the unorthodox pairing from "Riverdale" to win (Betty and Jughead?  Betty and Veronica are supposed to fight over Archie with Reggie trying to date the loser, while Jughead sits on the sideline).  Then again, there is the Twitter campaign for "Supergirl." 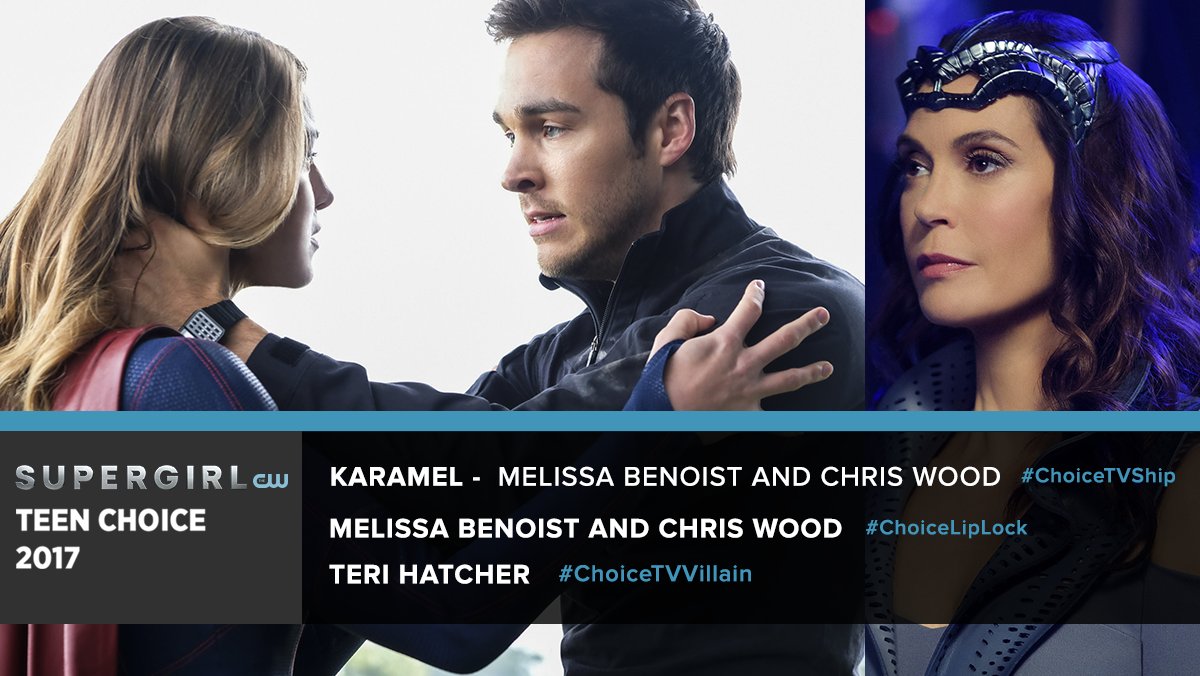 Oh, my, Riddler vs. Lucifer (not the one I like better)?  Someone flip a coin for me.  That written, the Twitter campaign for Teri Hatcher, who played Lois Lane 20 years ago, might just work.

Even though "Teen Wolf" is the only speculative fiction show here, I'd vote for either "America's Got Talent" or "So You Think You Can Dance."  My background as a moderator of a reality TV fan forum is showing.   Just the same, "Teen Wolf" is the returning winner and likely favorite.

I expect another actor from "Teen Wolf" will win, but I'm not voting for either of them.  My choice is Kyle Harris., as I rather like "Stitchers."

Shelley Hennig is the returning winner and favorite, but I'm not voting for her.  Instead, I'm voting for Hillary Duff.

Malcolm Barrett's character earned his hissy fit on "Timeless," so I'm voting for him.  Still, I expect either Dan Stevens or Kurt Russell will win.

My vote is for Michael Roker.  I don't care what the teens think.

They're not going to win, but I'm voting for Captain Hook and Emma Swan from "Once Upon a Time."  I'd been waiting for that kiss for years.  Another Disney couple will win though, Belle and The Beast.

That's it for the Teen Choice Award nominees.  Stay tuned for National Daiquiri Day tomorrow.
Posted by Pinku-Sensei at 12:00 AM