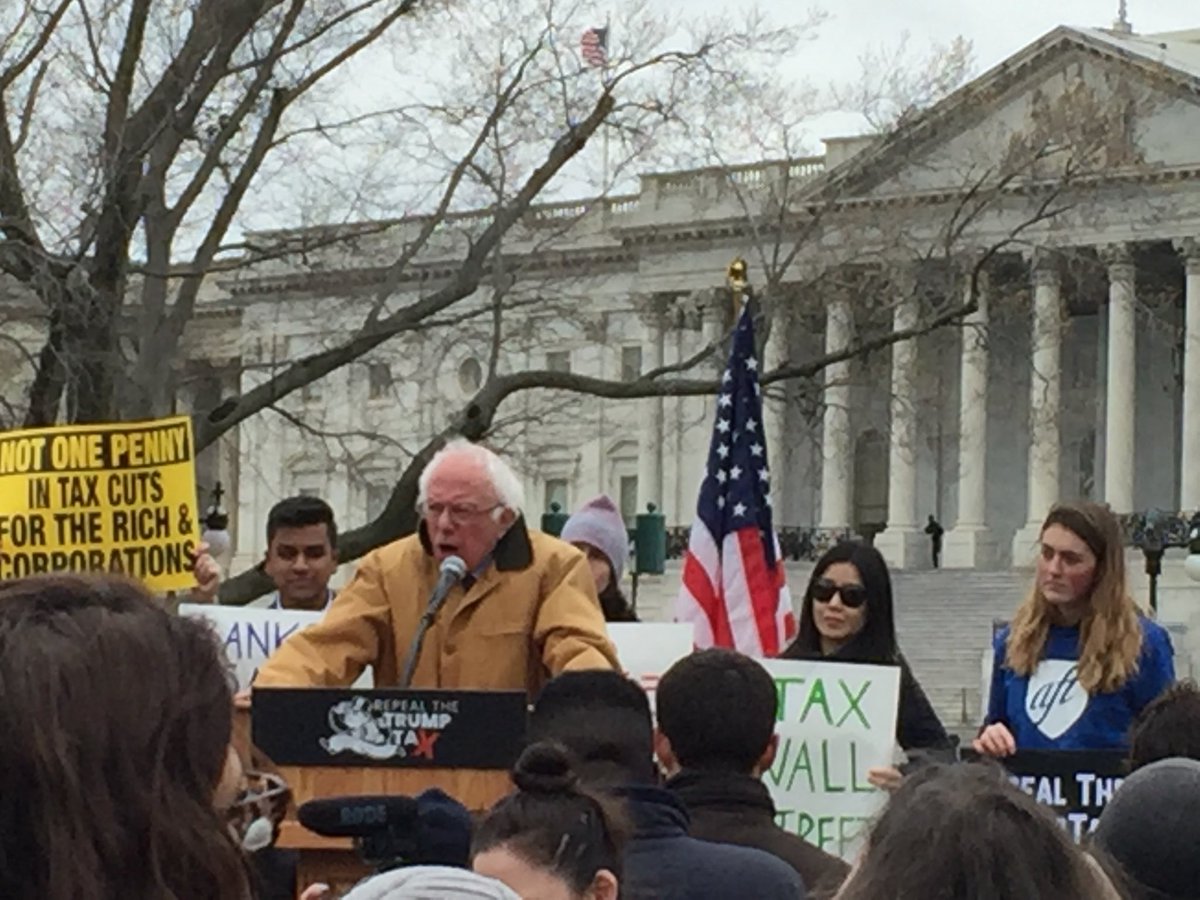 I explained why I posted R.I.P. Art Bell instead of a report on the Tax March yesterday.


[T]wo events happened that convinced me to postpone that entry.  First, the D.C. Tax March is today, so I'll wait for tonight's videos to be uploaded so I can write about them tomorrow.

I didn't see any videos, but I did find this passage in Business Insider's Tax Day became one of 2018's biggest media wars, as the GOP and Democrats battled over the new tax law.

The group Tax March put on the rally that featured top Democrats like Democratic Senatorial Campaign Committee Chairman and Maryland Sen. Chris Van Hollen and Sen. Bernie Sanders, an independent who ran for the Democratic presidential nomination in 2016.

"The American people's instincts on this bill were exactly right when they knew from the beginning that this thing stunk," Van Hollen said in reference to fluctuating poll numbers about the tax law's approval ratings.

Bustle listed all of the speakers and noted that all but two were Democratic (or at least Democratic-aligned in the case of Sanders) lawmakers.

While Republicans are struggling to campaign on the tax bill, Democrats seem to have more success campaigning against it.

Follow over the jump for reports from Tax Marches around the country.

I did promise to post something about the Palm Beach Tax March, which did get television coverage.  Here is WPTV News' Dozens take part in tax march in West Palm Beach.

A crowd of protesters gathered in West Palm Beach on Saturday near Mar-a-Lago.

Those are fair samples of what the Democratic rank-and-file think of the tax bill.  So are the quotes from Tax March protesters say $1.5 trillion in cuts could undermine social safety net in the San Diego Union-Tribune and Tax Justice March sees protesters in Eugene come out in full force from KVAL in Eugene, Oregon.


“We’re out here to oppose the Trump tax and tax scam that is going to financially devastate our country, all to give tax cuts to the richest 1 percent,” Steve Timberman, an organizer with SoCal Healthcare Coalition, told a small but passionate crowd.
...
Retired school teacher Laura Fuentes seemed unimpressed by promises of trickle-down economics. The 63-year-old said she came to Sunday’s event because she’s concerned that slashing taxes will trigger severe cuts to social spending in the future.

“I’ve heard they’re talking about cutting people off Medicare,” she said. “They’re going to have to do something to pay for the big tax cuts they’re gave the rich.”

Yusef Miller, a Navy veteran now working with the Council on American-Islamic Relations, echoed those concerns: “We should be funding these nonprofits to house our homeless. These are Americans. These are our children.

“We see people who can’t get food. We see families on the streets. Yet, we’re going to give tax breaks to the people who are cushioned,” he added.


"We think the money needs to be spent at home on infrastructure," said Patty Hine, a protester at the rally. "That means public education, maybe even free public education."

For Hine, and others, the main thing they were asking for on Sunday was change.

"We're pushing for a tax system that benefits everybody, not just the rich and powerful," said Michael Carrigan, with the Community Alliance of Lane County.

I'm with both Hine and Carrigan.

Tomorrow is Throwback Thursday, so stay tuned for a retrospective about the top posts of the previous blogging year.
Posted by Pinku-Sensei at 12:00 AM