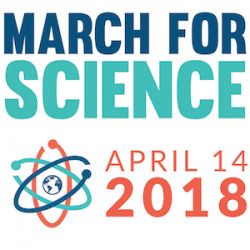 Today is the March for Science 2.0.  I won't be participating because I have a field trip for my geology class scheduled today.  The field trip will include a lot of walking, so I'll be marching for science in a different way.*

I have three videos on the demonstration with the first and most general from Wochit Politics: March For Science Returns Saturday In 200 Cities.

Saturday marks the second annual March for Science in 200-plus locations around the world. The March for Science began last year in response to the Trump administration's handling of science.
“Given that last year it was the early months of the Trump administration, there was more anxiety there. But the ultimate goals of building a community of science advocates and influencing policy with science are still the driving forces” [said] David Kanter, organizer of the New York City march.
Last year, thousands marched in hundreds of cities.
“Scientists have always been politically active, even when they don’t recognize it as such. Science has a grassroots movement that most of us recognize now." Aaron Huertas, a leader of the March.

Voice of America News has a more focused report in Rough Year in Science Policy Brings Researchers Back to March.

On Saturday, researchers who say they are fed up with politicians ignoring science will once again take to the streets in Washington and hundreds of cities around the world. The second March for Science takes place after a turbulent year in science policy under the Trump administration. VOA's Steve Baragona has more.

That's surprisingly optimistic, although it is from an information organ of the U.S. Government; they might have reason to be more positive than is warranted.

To balance it out, here is a video from The Nature Conservancy promoting the March for Science.

March with The Nature Conservancy at one of the many marches happening across the world.
...
From rivers that give us water to lands that nourish our bodies. And when we are guided by science, we have the tools to ensure that people and nature don’t just survive together, they thrive.

I'd love to, but I have a previous engagement.  May at least some of my readers march in my place.

This won't be the only protest this weekend.  Tomorrow is the day of the Tax March.  Resist!

*That trip may be cancelled because of a winter storm (Xanto, according to The Weather Channel), that is likely to bring freezing rain over much of the state, which means I still won't march.
Posted by Pinku-Sensei at 12:00 AM