John Oliver helps update 'The tax bill and the U.S. economy in 2018 and beyond,' a top post of the seventh year of Crazy Eddie's Motie News Happy Throwback Thursday!  To celebrate, I am following through with my promise in Football and the Super Bowl for the seventh year of Crazy Eddie's Motie News to post an update on the tax bill.  That's because the seventh most read entry of last year was The tax bill and the U.S. economy in 2018 and beyond from December 30, 2017.  It earned 7094 default page views and 7313 raw page views, enough to make it the fourth most read entry actually posted during the seventh year of the blog.

Before I explain how it got there, along with an update on its predictions, I'm doing the same thing I did for Samantha Bee helps update 'Vox on Puerto Rico statehood and John Oliver on territories,' the fourth most read entry of the seventh year of Crazy Eddie's Motie News, include an update from an Emmy-winning variety talk show host.  In this case, it's Last Week Tonight with John Oliver on Corporate Taxes.

Many of America’s largest corporations shift a surprising portion of their profits overseas to avoid paying taxes. Even more surprisingly, that’s a legal thing to do.

That's even more pointed than John Oliver and FiveThirtyEight on Tax Day and that's saying something!  Also, in case my readers missed it, here is a diagram of a double Irish with a Dutch sandwich. 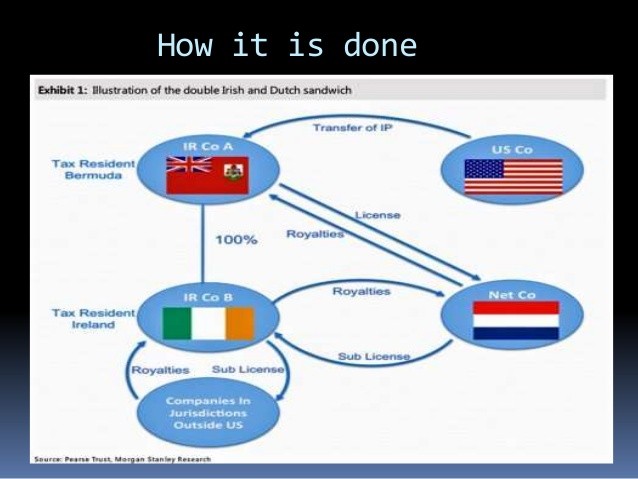 Clear as mud, but it certainly avoids U.S. taxes.

Follow over the jump for the stories describing how this entry rose into the all-time top ten, how others reacted to it, and how its predictions have fared so far.


Thanks to being shared by Infidel 753 the day after it was posted, this entry already had 141 default and raw page views before being shared at the Join the Coffee Party Movement page at 10 P.M. EST on December 31, 2017. It earned 1970 page views in the first 2 hours and ~6000 in the first 24 hours after being shared. It passed 'Last Week Tonight With John Oliver' leads variety talk shows at the Primetime Emmy Awards with 4090 page views, knocking it out of the top ten, The Michigan recount is on! with 4155 page views, and A 51st star for Puerto Rico on Flag Day with 4240 page views to reach eighth on the all time top ten between 10:00 and 11:00 A.M.  It then passed Michigan recount still on as Trump fails to stop it while Schuette still trying with 4892 and Fall back as 'Last Week Tonight' asks 'how is this still a thing?' with 4915 page views between 2:00 and 3:00 P.M.  Between 8:00 and 9:00 P.M., it snuck past John Oliver on feelings over facts and Colbert on Trumpiness with 6059 page views to reach fifth on January 1, 2018.  It continued to creep up until it slipped past Trump thinks Sanders is the right enemy with 7073 page views to land in fourth place overall between 11:00 and 11:59 P.M. on January 3, 2018.

The entry was most read post during January 2018 with 7131 default page views for the month.  It ended the blogging year in eighth place overall.  While it survived being passed by Facebook knows your political affiliation and much more, which initially knocked Trump thinks Sanders is the right enemy out of the top ten, it eventually fell out of the default top ten when Blogger recalculated its default page views, allowing Trump thinks Sanders is the right enemy to return to tenth place.  Sic transit gloria mundi.

The entry received several comments at the Join the Coffee Party Movement page.  My favorite was written by Margaret Glenday Innocenti.


I think a lot a families with children will do well at the expense of older people who will lose the ability to itemize will do worse. Banks will suffer because if you refinance you won’t be able to deduct refinanced mortgage interest or home equity line interest. The doubling of the standard deduction is meaningless with the loss of the exemptions at &4050 per exemption. When 13 million lose health insurance then premiums will rise and it can affect employment in the healthcare industry. The end of net neutrality can potentially cause a lot of complications for both businesses and residents. The lowering of corporate taxes will potentially be meaningless if bank mortgage sales drastically are reduced.

I don't agree with all of it, but I thought it was insightful.

On the web, the best response came from Paul W. in his Hope You Invested In Manure Futures...


This may not be the kickoff of the recession that Pinku-Sensei warned was coming, but am willing to bet this is the tsunami alarm going off: The Stock Market has dropped sharply both on Friday and today (via CNN)...

The long-term implications for this are beyond my meager understanding (I got a C in economics: the best I can tell you is "buy low, sell high."), but when I consider Pinku's early warning about the recession, and the fact we've got a federal government led by morons who create economic chaos wherever they go, I am not looking forward to the coming fiscal year.

He then got my attention by mentioning me on Twitter, which prompted me to leave the following comment.


You asked on Twitter "about the latest stock market woes, is there anything worth noting?"  Time to check my predictions about stocks: "I expect the Dow Jones Industrials to get above 25,000, struggle to break 26,000, then sink down to between 20,000 and 22,500 over the next couple of years."  The Dow broke 25,000 early in January, had no trouble getting above 26,000 but then struggled to stay there, and fell about halfway from 26,000 to 22,500, so my predictions look pretty good so far.  At worst, I'm one and one-half out of three and that score will stand no matter what else happens.  As for the future, watch what happens with interest rates.  Janet Yellen's successor and the rest of the Federal Reserve Board may not raise rates as aggressively as they would have before the worst one-day point drop in the Dow.  That may allow stocks to recover to 25,000 before falling below 24,000.

The prediction in the last sentence also happened, as stocks rallied above 25,000 before falling below 24,000.  Also, the Dow Jones fell to 22,533.20 in March, a little more than 1,000 points above the upper target of 22,500, so reality came even closer to my prediction.  As for the yield curve inversion I predicted, Bloomberg reported earlier this month that was staring to happein in Bad Omen for Markets From First Signs of Yield Curve Inversion: "The inversion of the one-month U.S. overnight indexed swap rate implies some expectation of a lower Fed policy rate after the first quarter of 2020, the bank’s strategists including Nikolaos Panigirtzoglou, wrote in a note Friday."  New Deal Democrat at the Bonddad Blog is also displaying signs of worry, writing The consumer edges closer to the precipice.  So, the U.S. is not in recession now, but the onset of the next recession is still approaching.

The next retrospective will be about an ever popular topic at this blog, holidays.  Stay tuned.

Previous retrospectives about John Oliver.
Previous entries in this series.