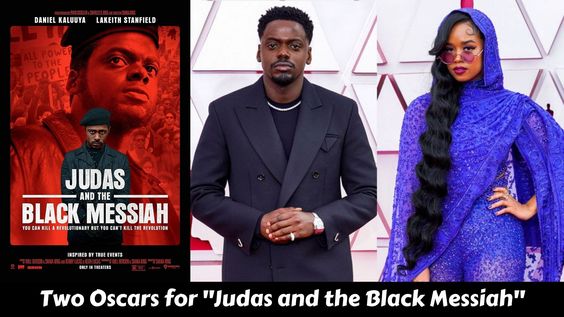 I gushed over H.E.R. singing “Fight For You” from "Judas and the Black Messiah" in Oscar nominated scores and songs for National Film Score Day followed by my opinion of the movie's Oscar prospects.

Wow, I love this song! I don't think it will win, but I think it should! I have a feeling it will be the best live performance along with “Husavik” at the actual awards. Too bad the votes will be counted before the artists perform. At least Daniel Kaluuya is likely to win Best Supporting Actor, like he did at the Golden Globes and Critics Choice Awards, so "Judas and the Black Messiah" won't go away empty-handed.

Not only did I think the song should win, much to my pleasant surprise, it did win! 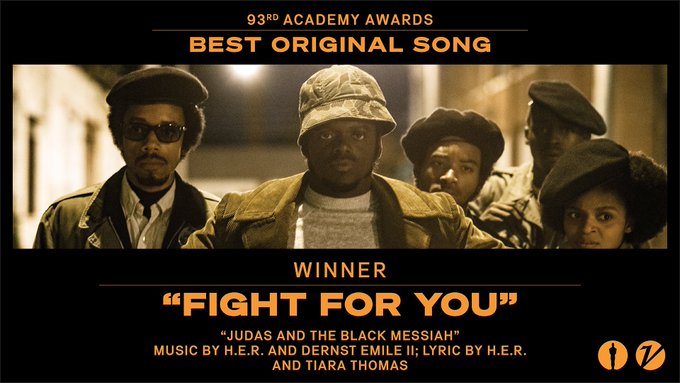 H.E.R. - "Fight For You” (from Judas And The Black Messiah)
Wow! I'm even more impressed seeing it "live." I feel it did have the most energetic performance of all of the nominated songs at the Oscar Pre-Show, not the awards ceremony itself, with “Husavik” a close second. Performing on location with local musicians and ending with a fireworks show helped “Husavik.” However, the ABC upload of “Husavik” has the most views of any of the performances with "Fight For You" in last on ABC's channel, which has the description "H.E.R. performs the Oscar nominated original song "Fight For You" from JUDAS AND THE BLACK MESSIAH at Oscars 2021." I credit that to most of the artist's fans watching the video on H.E.R.'s channel instead of ABC and ABC uploading its clip after the show ended.

Watch H.E.R.'s Oscar 2021 acceptance speech for Music (Original Song) for the song 'Fight For You' from JUDAS AND THE BLACK MESSIAH.

H.E.R. continued acknowledging the people that made her Oscar possible in JUDAS AND THE BLACK MESSIAH's Thank You Cam Speech: Original Song from ABC.

I'm glad her collaborator Dernst Emile II was able to get in front of the microphone, too

Just like Pippa Ehrlich did in the Variety press conference I embedded in 'My Octopus Teacher' wins Documentary Feature at the Oscars, H.E.R. explained the greater significance of her award in H.E.R. Gets Halfway to an EGOT After Oscar Win for Original Song 'Fight for You'.

After winning the Oscar for Best Original Song for "Judas and the Black Messiah" anthem "Fight For You," H.E.R thanks collaborators Dernst Emile II & Tiara Thomas, expressing gratitude for being apart of a film that honors the Black Panther party.

The press here come off as fans as they do journalists, but they still asked good questions that got interesting, thoughful answers. One of them was that H.E.R. is also Asian-American, being half-Filipino, which I may not have learned for a long time. The other is that she is working on getting her EGOT. I want her to, but I'm hoping Lin-Manuel Miranda gets his first. He just needs an Oscar; I hope he earns one for "In the Heights."

H.E.R. and her collaborators gave one last interview by themselves for ABC, H.E.R., Tiara Thomas, and Dernst Emile II 'Oscars: After Dark' Winner Interview.

Watch H.E.R., Tiara Thomas, and Dernst Emile II on 'Oscars: After Dark' talking about their win for Best Original Song 'Fight For You' from JUDAS AND THE BLACK MESSIAH.

That was fun, but I'm not done. My readers and I will hear from Daniel Kaluuya about his performance and Oscar over the jump.

Watch Daniel Kaluuya on the Oscars 2021 red carpet talking about playing Fred Hampton in the film, JUDAS AND THE BLACK MESSIAH.

Kaluuya started smoking for this role? That's a literally unhealthy level of dedication! I hope he's successful quitting smoking. Just the same, it was a fun interview.

Watch Daniel Kaluuya's Oscar 2021 acceptance speech for Actor in a Supporting Role for his portrayal of Fred Hampton in JUDAS AND THE BLACK MESSIAH.

Kaluuya forgot to thank Shaka King onstage, so he did that in Daniel Kaluuya's Thank You Cam Speech: Supporting Actor.

Watch Oscars 2021 winner Daniel Kaluuya's Thank You Cam Oscar acceptance speech for Actor in a Supporting Role for JUDAS AND THE BLACK MESSIAH.

Awkward moment about his parents aside, Kaluuya spoke movingly about Fred Hampton in his acceptance speech, which he continued in Daniel Kaluuya Celebrates Fred Hampton After Oscar Win for Best Supporting Actor from Variety.

Daniel Kaluuya appears backstage after his win for Best Supporting Actor at this year's Oscars for his portrayal of civil rights revolutionary Fred Hampton in "Judas and the Black Messiah". During his speech, after he thanked the cast, crew and producers behind the film, Kaluuya also paid tribute to Hampton and the entire Black Panther party.

LOL at the reporter who asked about Regina King directing Kaluuya instead of Regina King. Wrong King. Oops! Just the same, good recovery upon being asked to repeat the question.

Watch Daniel Kaluuya on 'Oscars: After Dark' talking about his Supporting Actor win for JUDAS AND THE BLACK MESSIAH and how he'll pick future projects.

Because of the writing and especially Kaluuya's performance, I think "Judas and the Black Messiah" will do more for the legacy of Fred Hampton than anything else. This is one of the reasons why entertainment matters.

I plan on writing more about the Oscar winners tomorrow. Stay tuned.
Posted by Pinku-Sensei at 3:54 PM