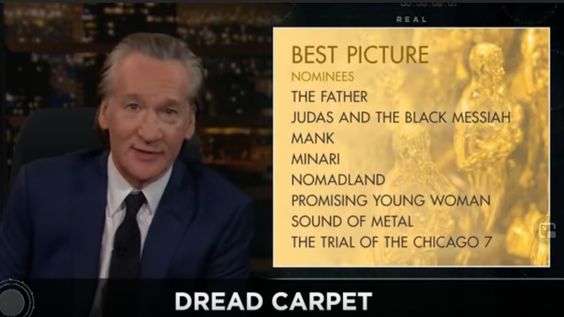 I concluded Carbon dioxide at levels not seen for 3.6 million years despite economic slowdown from pandemic by telling my readers "Enough DOOM. Stay tuned for more on the Oscar nominees tomorrow, the Sunday entertainment feature." Once again, I'm featuring something my wife found, New Rule: The Debbies | Real Time with Bill Maher (HBO) in which Bill gets some cheap laughs at Hollywood's expense and demonstrates why he called his old show on ABC "Politically Incorrect."

Bill gives two thumbs down to the trend of virtue-signaling Oscar films.

Bill has a point about the movies the Hollywood creatives in the Motion Picture Academy nominate for awards. They are serious "coffee table" cinema that the entertainment industry wants to show off as serious art. I grew up around these people and they've always been like this, so that's not new. It's just that two trends have made it more apparent this year.

It turns out Hollywood has a business reason for this in addition to an artistic one, to say nothing of snobbery.

“The Oscars aren’t just about the most popular movie,” said Jonathan Kuntz, film historian and lecturer at the U.C.L.A. School of Theater, Film and Television. Instead of mass appeal, the best picture award recognizes intangible qualities such as originality, technical innovation, cultural significance and artistic value.
...
“The Academy Award has always been, since the early days, Hollywood’s way of helping itself in promoting films,” said Mr. Kuntz, explaining why lower-grossing art house films are often favored. “The value of an Oscar to a medium or small film can be great, whereas to a large film, it can be insignificant.”
...
“They want to reward new people and new ideas,” said Mr. Kuntz, which is why best picture rarely goes to reboots or sequels. The first “Star Wars” movie, “A New Hope” (1977), was nominated for best picture, but did not win. The “Star Wars” franchise has enjoyed enormous commercial success since then, but Mr. Kuntz doubted that academy voters would pick a “Star Wars” film for best picture.
...
“The Lord of the Rings: The Return of the King” (2003) is one of the few fantasy movies, and one of few sequels, to win best picture. “In 2001, when the first movie was nominated,” Mr. Kuntz said, “it was considered a major achievement.” He suspects that the reason it took three films for the academy to recognize the trilogy was because of its genre.

So there is a method to Hollywood's madness. I just hope it doesn't backfire.

Second, the pandemic has completely messed up Hollywood's box office and release schedule, so it's almost impossible to really gauge the popularity of movies and a lot of movies that would have been released in theaters ended up delayed, on streaming services, or both, like "Wonder Woman 1984." The following graph from Calculated Risk using Box Office Mojo data shows how the pandemic has caused the domestic box office to crater. 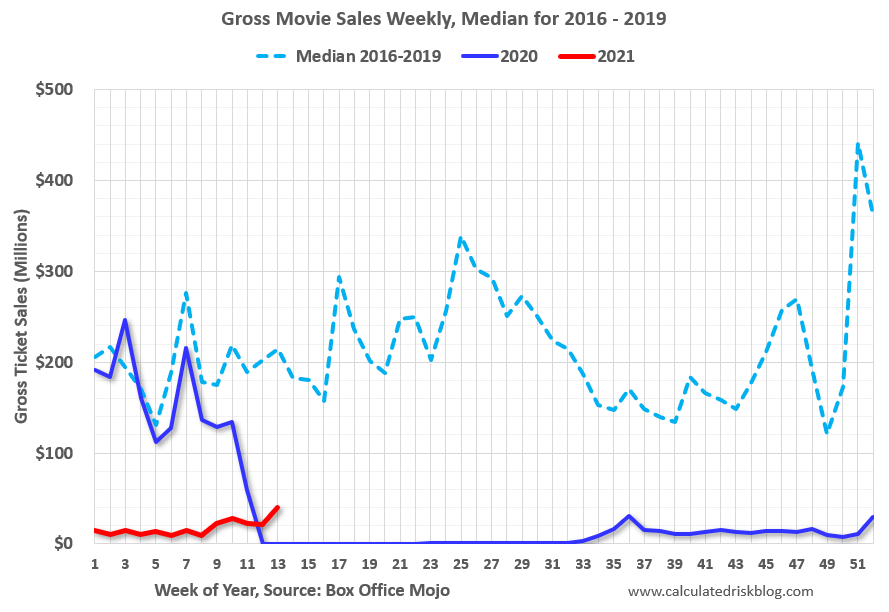 By the way, the uptick at the end of the 2021 series is from "Godzilla vs. Kong," which became the top grossing film so far this year after one week, even though it's also available for subscribers of HBO Max to stream.

On the other hand, the kind of films that the Motion Picture Academy likes to nominate got released anyway. That made Hollywood's taste for socially conscious Oscar nominees even more prominent this year than in previous years, when there were more popular movies to see in theaters. Just the same, even some of the Oscar nominees have found audiences on streaming, as the following graphic from Cord Cutter News shows.

Yes, "Nomadland," which Bill Maher dumped on, broke into the top ten streaming movies as measured by Nielsen. That's why I think it has a very good shot at winning Best Picture, whether Bill likes it or not. At least we know people, including the Motion Picture Academy members, are watching it.

Finally, Bill mocked the documentaries as the category for serious examination of issues to make people feel bad. As I pointed out in Politics, government, and injustice among the 2021 feature documentary Oscar nominees, while I found little uplifting about "Collective," I thought "Time," "Crip Camp," and "My Octopus Teacher" featured positive stories and "The Mole Agent" to be surprisingly fun. Maybe Bill should watch those for a better movie experience.

That's it for today's entertainment feature. I'll be back tomorrow for Yuri's Night. Stay tuned.
Posted by Pinku-Sensei at 12:42 PM