For Flashback Friday, I am looking back at John Oliver and Vox explain why most Confederate monuments exist in the first place, a serious and silly blast from the past, the fourth most read entry during the past blogging year and the second most read actually posted between March 21, 2020 and March 20, 2021. I will describe how it got its page views over the jump, but first I'm updating the subject matter, beginning with The Rachel Maddow Show segment Confederate Monument Removals A Mark Of Progress Long In Coming on MSNBC.

Rachel Maddow looks at how the removal of Confederate monuments is being viewed by members of the communities that have lived in their shadows for generations. Aired on 6/24/2020.

Maddow's report serves as a good snapshot of how fast events moved since I tweeted I haven't seen this many statues fall since the end of the Cold War only two weeks earlier. For a more thorough examination of the causes, watch CNN's Ken Burns: Confederate statues celebrate a false narrative.

Legendary documentary filmmaker Ken Burns says the United States is “in the middle of an enormous reckoning” and called for the removal of statues of Confederate soldiers and the renaming of military bases during a discussion with CNN’s Chris Cuomo.

I agree with Ken Burns; the United States is “in the middle of an enormous reckoning” about our racial history, which includes not only our treatment of African-Americans, but also Native Americans as I documented in TV news reports on Indigenous Peoples Day plus comedy for Canadian Thanksgiving. I also agree with what he said the day before Ken Burns: Our monuments are representations of myth, not fact in The Washington Post.

Our most venerated monuments represent a mythology. While we may hope the statue represents our highest aspirations of what America can and should be. It also can be a reminder of where and how far we fall short.

I agree with Burns; our public monuments are about our shared mythology more than our shared history. Consequently, I think all history is worth remembering, but not all is worth celebrating.

I'm going to conclude this segment by quoting a different passage from What motivates Americans to act than I usually do; "someone is going to have to mess with the circuses of 'bread and circuses' to arouse Americans." While I think the police killing of George Floyd was a necessary condition to spark last summer's protests, I don't think it was sufficient. I think the suspension of sports, which I explicitly mentioned as one of the circuses in Hipcrime Vocab on the Super Bowl, along with people being cooped up because of the pandemic, was the necessary precondition. It only took nine years for "who knows...that might actually happen" to come true.

Follow over the jump for how John Oliver and Vox explain why most Confederate monuments exist in the first place, a serious and silly blast from the past earned its page views. 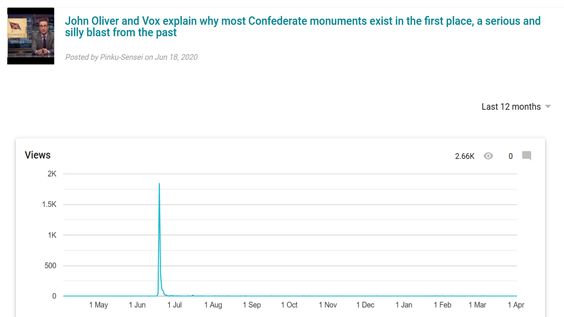 John Oliver and Vox explain why most Confederate monuments exist in the first place, a serious and silly blast from the past from June 18, 2020 earned ~2,500 default and 2,658 raw page views to rank fourth during the past blogging year and the second most read actually posted between March 21, 2020 and March 20, 2021. The entry was the most read entry of June 2020 with ~2,508 default and 2,541 raw page views by the end of the month. It was also the fourth most read post according to default page views and fifth most read according to raw page views for the 2020 calendar year with ~2,500 default and 2,630 raw page views, which meant it was also the second most read entry posted during 2020. The entry earned its readership through basic social media promotion plus being shared at the Coffee Party USA Facebook page.

It looks like I fulfilled my promise to make today's entry for Flashback Friday shorter than Seth Meyers updates late-night talk show hosts on the 2020 election and its aftermath for Throwback Thursday on April Fools Day. That's why I didn't include John Oliver and Washington Post examine coronavirus misinformation. I'll cover its story when I post the retrospective about the pandemic. Stay tuned.