100+ state legislators demonstrated for voting rights in D.C. and several were arrested

In Jane Mayer describes 'The Big Money Behind the Big Lie' on MSNBC, I mentioned state "laws restricting voting rights, which is the reason why Texas Democrats left the state for D.C. last month." CBS News covered that story the past two days. I begin with the most recent report, Lawmakers arrested during voting rights rally in Washington, D.C..

Several lawmakers and activists were arrested while rallying for a federal voting rights bill in Washington. Texas state Representative Ron Reynolds, who was among those arrested, joins CBSN's Lana Zak with more.

I wish Ron Reynolds and the rest of those arrested luck and leniency and also that their sacrifice is not in vain.

CBS News had more about the demonstration in yesterday's State lawmakers rally in D.C. for voting rights.

More than 100 state legislators from over 20 states have joined activists in Washington pushing for voting reform legislation. Representative Anna Eskamani of Florida was one of the lawmakers rallying on Capitol Hill. She joins CBSN's Elaine Quijano with more.

I want to point out two images from Elaine Quijano's interview of Anna Eskamani, both of which show polarization over voting rights, first by party affliation and then by race and ethnicity. 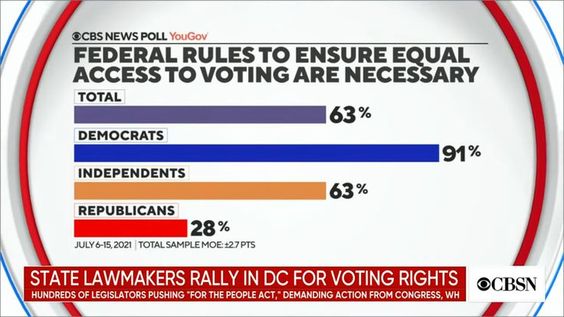 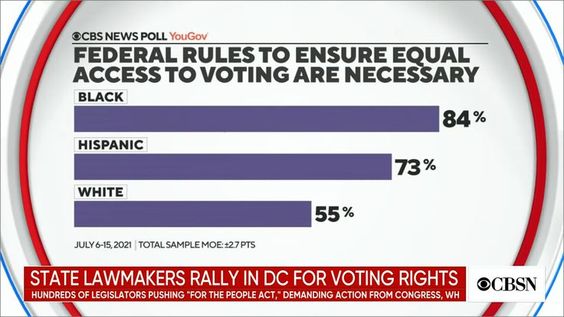 Polarization related to partisanship is much stronger than from race and ethnicity, so while a majority of all Americans and majorities of the races and ethnicities surveyed support federal rules to ensure equal access to voting, Republicans most certainly do not. No wonder laws restricting voting rights are being passed in states with Republican majorities in their legislatures.

Both segments also examined the latest wave of the COVID-19 pandemic in Texas and Florida. Right now, the two states account for a third of all new cases in the U.S. That deserves a post of its own, so stay tuned.
Posted by Pinku-Sensei at 11:45 AM