'Hamilton' at the Emmy Awards 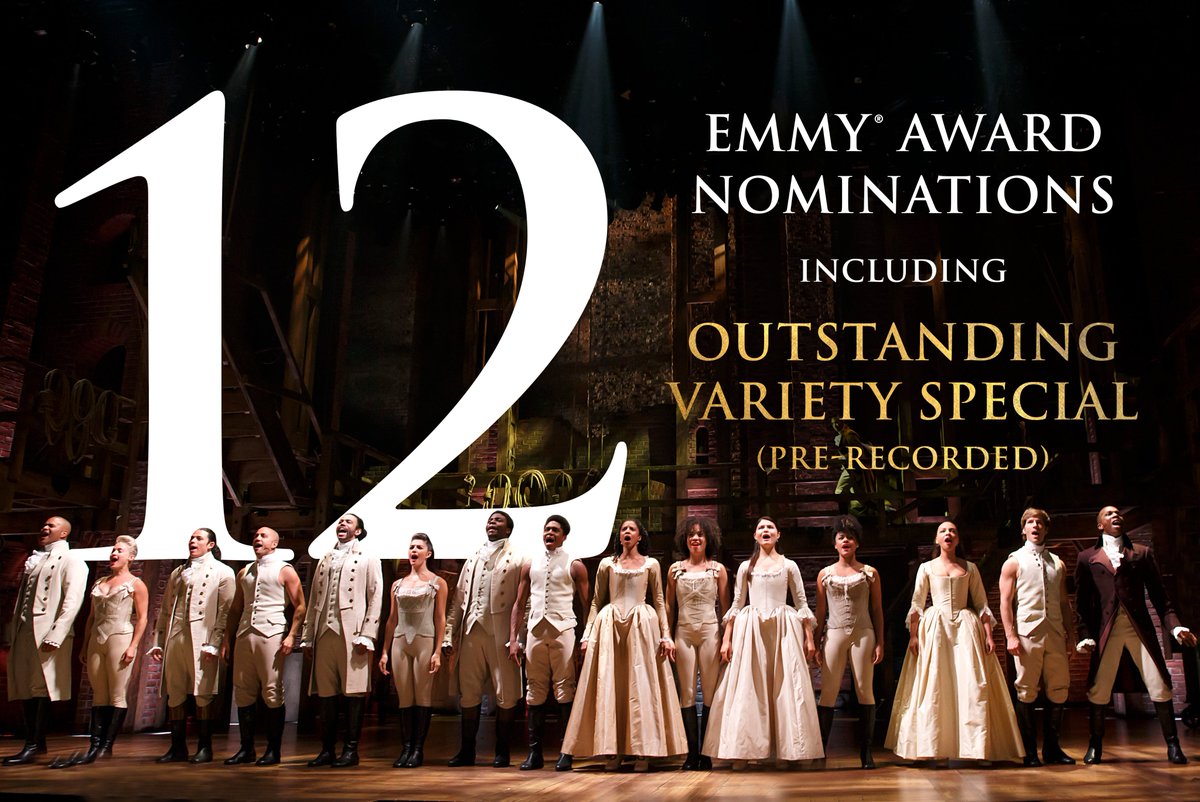 I concluded 'Last Week Tonight with John Oliver' leads Outstanding Variety Talk Series nominees at the Emmy Awards for the fifth consecutive year by telling my readers "Since I've said I would cover 'Hamilton' twice in this entry, watch for that to be the subject of the next installment of the series." Without any further ado, here are the nominations for the filmed stage play at the 73rd Primetime Emmy Awards.

When I covered Dave Chappelle winning this category, I foresaw this match-up.

I anticipate the comedians will have a hard time winning Outstanding Variety Special (Pre-Recorded) this season, as I think this is the category "Hamilton," the winner of two People's Choice Awards for drama movies, will end up competing in unless the Television Academy rules it to be a Television Movie. My readers and I will find out in July.

We found out; "Hamilton" is a prerecorded variety special, not a movie, at leas for this category, even though it was originally meant to be shown in theaters. Welcome to one of the effects of the COVID-19 pandemic on entertainment. Speaking of which, "Bo Burnham: Inside," recorded in Burnham's guest house during the pandemic, has five nominations to three for "8:46 – Dave Chappelle," the second fewest of any nominee in this category, ahead of only "A West Wing Special to Benefit When We All Vote" with two. Chappelle's special is behind "Friends: The Reunion" with four nominations, "David Byrne's American Utopia" with six, and "Hamilton" leads with twelve. Based on the number of nominations, especially since seven of them are for performers, the second largest peer group in the Television Academy after executives, I'd say "Hamilton" is the favorite. As I keep saying when I write entries about entertainment awards, electorates matter.

Since I haven't shared it before, here's Hamilton | Official Trailer | Disney+.

“Hamilton” is the story of America then, told by America now. Featuring a score that blends hip-hop, jazz, R&B and Broadway, “Hamilton” has taken the story of American founding father Alexander Hamilton and created a revolutionary moment in theatre—a musical that has had a profound impact on culture, politics, and education. Filmed at The Richard Rodgers Theatre on Broadway in June of 2016, the film transports its audience into the world of the Broadway show in a uniquely intimate way.

"'Hamilton'..."created a revolutionary moment in theatre — a musical that has had a profound impact on culture, politics, and education." That's another reason I blog about entertainment, to analyze what it has to say about government, politics, and society and determine if society is paying attention. In the case of "Hamilton," it did.

Now for four categories where "Hamilton" is competing as a movie instead of a variety special, three because there is no other place for the nominations. 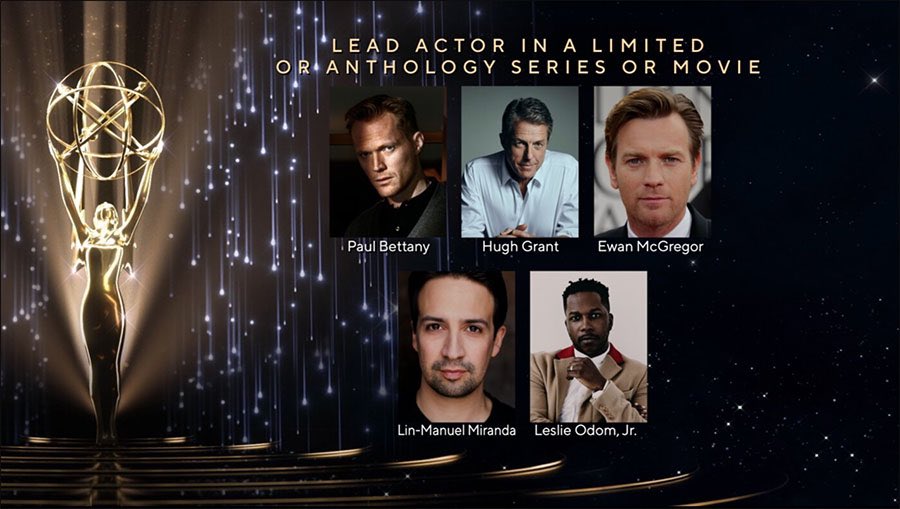 Outstanding Lead Actor in a Limited or Anthology Series or Movie

While Lin-Manuel Miranda won the People's Choice Award for The Drama Movie Star of 2020, Leslie Odom Jr. won the Tony Award for this role and earned two Oscar nominations this year for "One Night in Miami." The audience might like Miranda better, but the professionals like Odum more, and the professionals are voting for these awards. Again, electorates matter.

That doesn't guarantee that either Miranda or Odum will win. The nominated limited series actors are stiff competition and I will evaluate their chances when I examine Outstanding Limited Series in a few weeks. 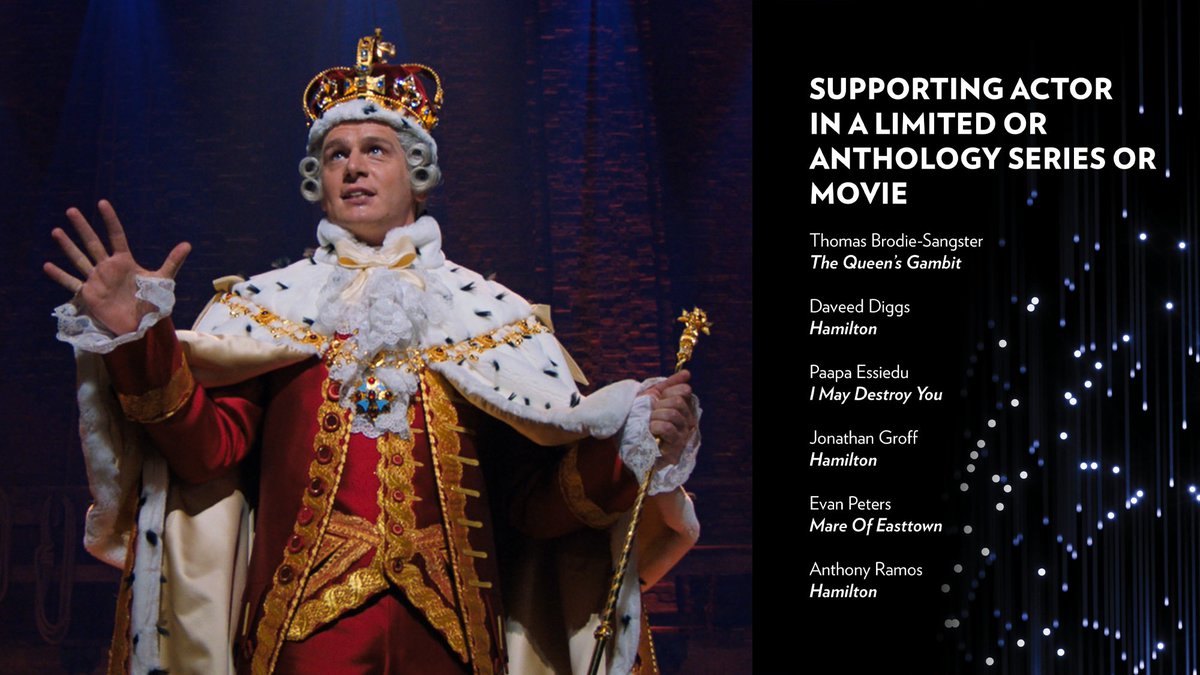 Outstanding Supporting Actor in a Limited or Anthology Series or Movie

"Hamilton" provides half of the nominees in this category, Daveed Diggs in a double role as the Marquis de Lafayette and Thomas Jefferson, Jonathan Groff as King George III, and Anthony Ramos in another double role as John Laurens and Philip Hamilton. Diggs and Groff both earned Tony nominations and Diggs took home the award, so I would give him the advantage out of the actors from the musical. Again, that doesn't mean Diggs will win, as the nominated limited series actors are stiff competition and I will evaluate their chances when I examine Outstanding Limited Series in a few weeks.

Watch 'Hamilton' star and first-time Emmy nominee Daveed Diggs on the legacy of the acclaimed show from Gold Derby.

'Hamilton' star and first-time Emmy nominee Daveed Diggs on the legacy of the acclaimed show. The Tony Award winner chats with Gold Derby editor Christopher Rosen about the program now streaming on Disney+.

I appreciate Diggs pointing out how the significance of the show changed when Trump took over from Obama. That's an interesting and important insight. 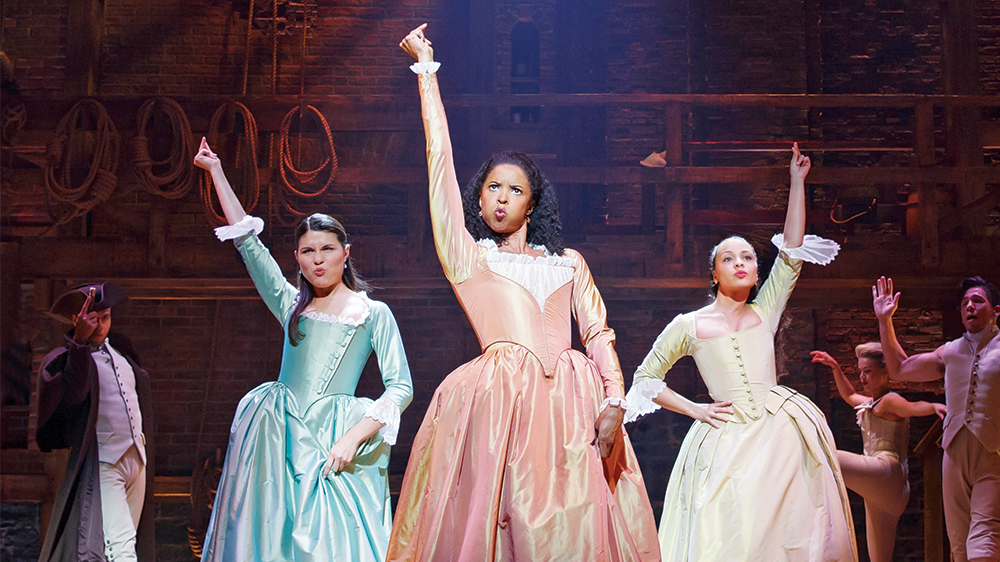 Outstanding Supporting Actress in a Limited or Anthology Series or Movie

Renée Elise Goldsberry as Angelica Schuyler and Phillipa Soo as Eliza Hamilton didn't compete against each other at the Tony Awards as Soo was nominated for Best Actress in a Musical while Goldsberry won for Best Featured Actress in a Musical. Here, they are competing against other. I'm not sure it matters, as I think this contest is between Kathryn Hahn and Jean Smart.

Follow over the jump for the nominees behind the camera. 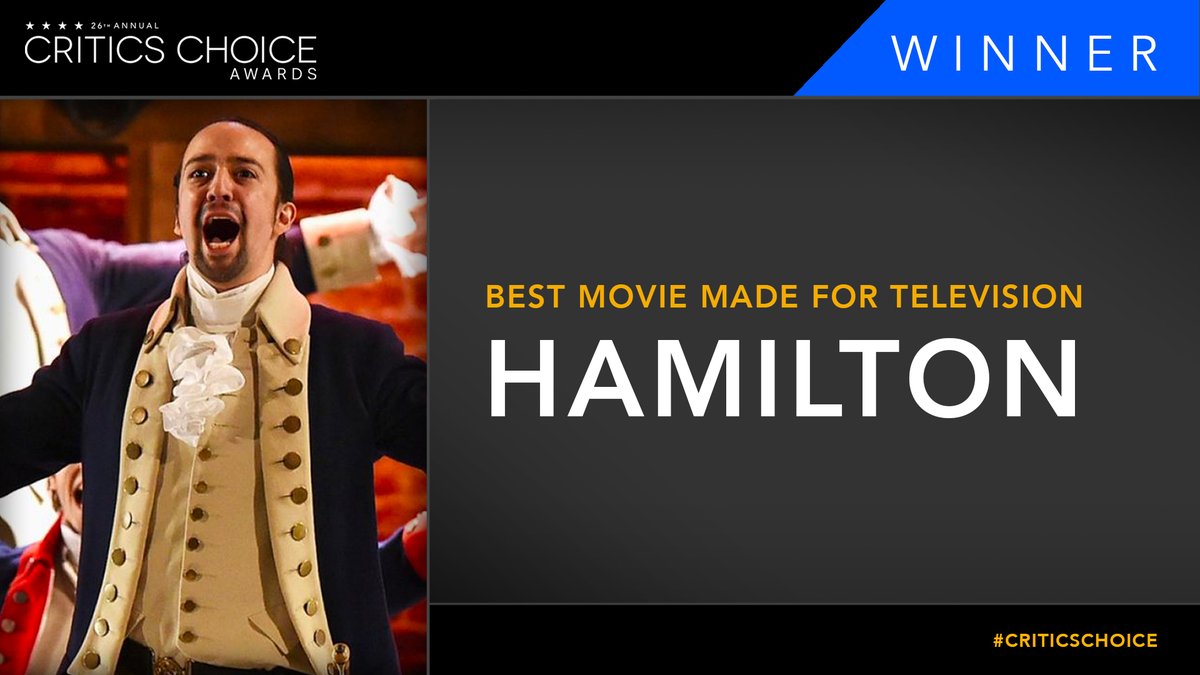 Outstanding Directing for a Limited or Anthology Series or Movie

Thomas Kail did win a Tony Award for his stage directing, but I'm not sure that he can win against this field. In particular, I think "Mare of Easttown" and "The Queen's Gambit" are well ahead of the rest unless the Emmy electorate can decide which episode of "I May Destroy You" Sam Miller did a better job of directing or the Emmy electorate falls for "WandaVision," a show about television that isn't about show business. I'll explain that in a future post.

This is the last of four categories in which "Hamilton" is competing as a television movie instead of a recorded variety special. I understand why for the acting nominations, but there is an Outstanding Directing for a Variety Special category, so I'm surprised "Hamilton" got a nomination as a movie for television.* On the other hand, both the Golden Globes and Critics Choice Awards considered "Hamilton" to be a movie. As the graphic I used to illustrate this section shows, it won Best Television Movie at the Critics Choice Awards. Once again, the Critics Choice Association surprised me.

Now for three categories where "Hamilton" is competing against other variety shows at the 73rd Primetime Creative Arts Emmy Awards.

Outstanding Sound Mixing for a Variety Series or Special

I missed this category in 'Last Week Tonight with John Oliver' leads Outstanding Variety Talk Series nominees at the Emmy Awards for the fifth consecutive year. Oops. I think it's between "Hamilton" and "David Byrne's American Utopia" because both are music shows and I think music has an advantage in sound categories. By that criterion, "Bruce Springsteen's Letter to You" should have a chance, too, but this is its only nomination. I think the sound mixing for the explosion in "Last Week Tonight with John Oliver" has a better chance of winning.

I'm going to repeat what I wrote for Outstanding Variety Special (Live).

Both "The 63rd Annual Grammy Awards" and "The Oscars" have four nominations while "The Pepsi Super Bowl LV Halftime Show Starring The Weeknd" has three. Based on the history of the award, I think a live event celebrating show business will win, favoring either "The Oscars" which has been nominated every year since the inception of this version of the award, or the Grammy Awards, which has been nominated for three of the four years of the current category. If all things were equal, I'd give the nod to the Oscars, since movies are closer to television than music, but other than the number of nominations, I'm not sure all things are equal. I found the ceremony a bit underwhelming compared to previous years except for the pre-recorded music segments; those were spectacular. If it wins, it will be because it was a minor miracle that it happened at all.

I conclude by being a good environmentalist and recycling from It's Saturday night, so here are the 21 Emmy nominations for 'Saturday Night Live'.

"Last Week Tonight with John Oliver" has won this five years in a row, so it's the favorite. While this installment is about variety sketch nominees, neither SNL or "A Black Lady Sketch Show" are my picks to upset it. Instead, I think that would be "Hamilton."

That's it for today's examination of "Hamilton." I'll return to this series Saturday or Sunday after celebrating Friday the 13th tomorrow. Stay tuned.

Previous posts in this series
Posted by Pinku-Sensei at 11:26 AM