Nebris and I have a conversation 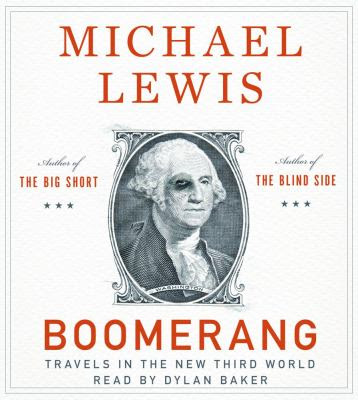 Over on Facebook, Nebris posted the following link, which I just happened to have open already.

N.Y. Review of Books: How We Were All Misled
John Lanchester
Boomerang: Travels in the New Third World
by Michael Lewis
Norton, 213 pp., $25.95

We had a conversation about it, which Nebris posted to his Dreamwidth and LiveJournal. As you can see, we covered a lot of territory.


Me: Excellent recommendation. I have it open in another tab right now.

Nebris: I ran out of Crime Drama and had to read something serious. ;)

Me: Dude, this is still Crime Drama. It's just that it's real-life white-collar Crime Drama.

On that note, here's a money quote:


Boomerang is about what he has come to see as the larger phenomenon behind the credit crunch: the increase in total worldwide debt from $84 trillion in 2002 to $195 trillion now. The thesis is that “the subprime mortgage crisis was more symptom than cause. The deeper social and economic problems that gave rise to it remained.” It is these deeper problems that are dominating economic news at the moment, and led to the desperate measures announced at the European summit on October 27 and to the aborted Greek plan to hold a referendum that followed. The G20 Economic Summit of November 3–4 was dominated by discussion of the Eurozone crisis, but ended with no coherent plan in view, and none has emerged since. Boomerang tells the story of how we got here, and in the course of doing so gathers together an extensive arsenal of data at the top end of my 0–10 Reykjavik waitress scale: the fact that Greek railways have €300 million in other costs; the fact that the Californian city of Vallejo spent 80 percent of its budget on the pension and pay of police, firemen, and other “public safety” workers; the fact that between 2003 and 2007, Iceland’s stock market went up ninefold; the fact that in Ireland, a developer paid €412 million in 2006 for a city dump that is now, because of cleanup costs, valued at negative €30 million.

Lewis has noticed something important about these excesses: that the precise details of how people ran amok varied from culture to culture. Cultural and historical faultlines were exposed by the boom, and behavior varied accordingly.


The credit wasn’t just money, it was temptation. It offered entire societies the chance to reveal aspects of their characters they could not normally afford to indulge. Entire countries were told, “The lights are out, you can do whatever you want to do and no one will ever know.” What they wanted to do with money in the dark varied. Americans wanted to own homes far larger than they could afford, and to allow the strong to exploit the weak. Icelanders wanted to stop fishing and become investment bankers, and to allow their alpha males to reveal a theretofore suppressed megalomania. The Germans wanted to be even more German; the Irish wanted to stop being Irish. All these different societies were touched by the same event, but each responded to it in its own peculiar way.

I'll repeat. "Americans wanted to own homes far larger than they could afford, and to allow the strong to exploit the weak." What do you suppose that means about us?


Nebris: I'd say this is a key part of why the Occupy Movement is not likely to get too far.

Me: Yeah, deep down, Americans like dominance and the material life too much to be very committed to equality.

On a related note, I've been reading Greer the Archdruid more lately. He thinks that the same love of the material is going to get in the way of Occupy's goals, which means it will be an issue for the Coffee Party, too.

Speaking of Greer, I can see why you two have the potential to become major spiritual rivals, something you realize but which he has no clue about--yet. He's been writing a lot about The Hologram (without ever using that term) and how it works from a magical perspective. Very enlightening, even if I have to take his hidden motives into account.

Nebris: His last post got my blood up a bit as I finally realized that what he is actually doing is pushing a 'lifestyle paradigm' that is mostly personal as a Universal Paradigm.

If Greer needs to go up into the hills and breed chickens and grow veggies, that's perfectly fine. But to so strongly advocate that his Holy Hillbillyism is some kind of Great Solution is not merely egocentric bullshit; it is a formula for mass murder because only the death of literally billions would allow it to be such.

Plus there's the fucking White Arrogance on his part in thinking that we, the great US of A, after having looted the planet for three quarters of a century, that the rest of the world will even allow us to 'just go up into the hills'. As the Marines say, “Payback is a mother fucker.”

No, if The Republic does not fulfill the Great Promise of The Future we've made for so long in some reasonable fashion, White Americans at the very least will be 'made to pay'. Another reason why I push for The Sisterhood to be multiracial.

The thread continued in comments at his LiveJournal.


Me:I was thinking of recommending you post this on your DW/LJ. I'm glad you did on your own.

Nebris: I suppose you recognized this is part of a larger indictment of Doomers in general.

Me: Oh, absolutely. That reminds me, I still have to post your comments about Kunstler and Greer. I might wait until after I interview them for the show people in the Coffee Party want me to host on their Blog Talk Radio program. Both have books coming out. Nothing like free publicity to get guests.

Nebris: I would check into John Robb as well. He represents the third main school of Doomers, what I call the Techno Resilientists. Very Libertarian - real ones, not Randiod wannabes - but def pro-technology. Lots there for The Temple to copy.

BTW I'm very pleased with myself with 'Holy Hillbillyism'. lol

..Jimmy would represent the Neo-Feudalists..

Yes, I'll have to post Nebris's comments about Greer and Kunstler. After all, I've been promising it since July.
Posted by Pinku-Sensei at 3:27 AM