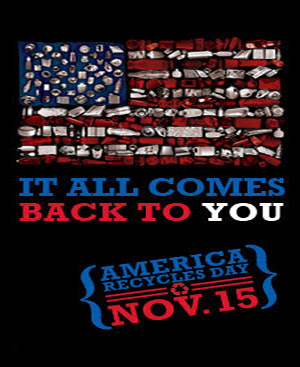 Yes, there is such a day, as I found out when I came across the following press release from Virginia Tech: America Recycles Day to be celebrated Nov. 15.

BLACKSBURG, Va., Nov. 7, 2013 – On Friday, Nov. 15, Virginia Tech will celebrate America Recycles Day, a national campaign to raise awareness to schools, universities, and community groups on the importance of recycling.

Hosted on campus by the Office of Energy and Sustainability, the America Recycles Day celebration will take place from 11 a.m. to 2 p.m. on the Squires Student Center Plaza between Squires and the Graduate Life Center at Donaldson Brown.

Participants can learn easy recycling tips and see recycling demonstrations. Food, games, and prizes are also part of the event.

The Recycling Campaign, sponsored by Keep America Beautiful and the Ad Council, aims to generate awareness, explain how and where to recycle, mobilize individual ownership and emotional connection to recycling through community building, and transform recycling into a daily social norm. The campaign shows consumers that their recyclable materials want to be something more, and promotes recycling as a way to give garbage another life.

In "Journey," a plastic bottle refuses to settle for being just a bottle and recognizes its dream in a coast-to-coast journey after being recycled.

Lovely PSA.  If I can figure out a way to show it to my class, I will.

By the way, VT isn't the only university in Virginia who hosted a recycling event this fall.  University of Virginia did as well: Waste Diversion Challenge Scheduled For Georgia Tech Game.
Matt Kelly
October 23, 2013

The University of Virginia will step up its game Saturday by adding food composting in its efforts to win an annual football game waste-reduction competition.

The Department of Athletics, U.Va. Sustainability and U.Va. Dining Services are partnering in the annual Game Day Challenge, to be held Saturday when the Cavalier football team hosts the Georgia Institute of Technology Yellow Jackets at Scott Stadium at 12:30 p.m.

The Game Day Challenge is a national competition sponsored by the federal Environmental Protection Agency’s WasteWise program, Keep America Beautiful and College and University Recycling Coalition, designed to promote waste reduction. This year, 63 colleges and universities are competing to reduce waste during a home football game. The schools will be ranked on their recycling and waste data, with the winner to be announced in January.

In previous years, U.Va. has relied solely upon aggressive recycling efforts in the competition, but this year it will include food waste composting.

As for me, it's Friday, which is trash and recyclables pick-up day.  That means I'll celebrate by doing what I do every Friday--recycle! 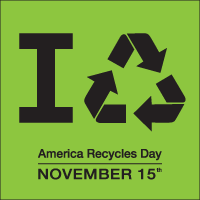