Looking back and ahead at mayoral elections

First, the Washington Post looks back at the election just covered in Nobody cares about mayoral races

In November 2012, 130 million people, about 58.2 percent of the voting-eligible population, turned out to vote for President of the United States. A year later, less than half that percentage showed up to elect new mayors in big cities across the country, like New York, Detroit, Seattle and Cincinnati.

Here is the data from Next City. 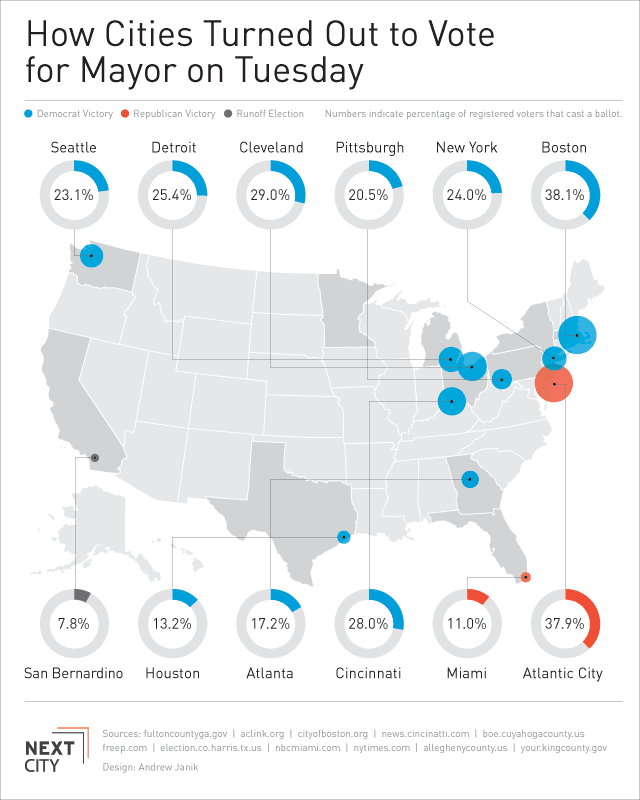 The only major city election not displayed above is Minneapolis, because Next City couldn't compare registration to turnout, as Minnesota has same-day voter registration.  Just the same, Minnesota is still highlighted on the map.

Next City has more about the importance of local elections and why low turnouts are a disgrace.

This, despite the fact that these elections will influence your day-to-day life and tax bill more drastically then a presidential election. Cities are ground zero for reform, not Washington.

Whether it’s housing policy, minimum wage or a focus on local sourcing for public projects, municipal elections — and specifically, who winds up in City Hall — will have a much greater direct impact on your life than President Obama ever will, Obamacare notwithstanding.

This is a point I make to my environmental science students every semester, and why I voted in Royal Oak's municipal election.  It's also why I'm glad to see that Detroit had the fifth highest turnout of the twelve cities listed, ahead of NYC.  People here knew this was an important election.

Looking ahead, the biggest election on the 2013 Daily Kos Elections Calendar is another big city mayoral election, this time in San Diego.  KPBS's lead report on the contest as of yesterday was Fundraising Going Strong As San Diego Mayoral Election Nears by Joe Yerardi.Saturday, November 16, 2013

In the race for cash in the special mayoral election, former assemblyman Nathan Fletcher and Councilman David Alvarez — both Democrats — remain neck and neck, according to the latest campaign filings.

Alvarez and the independent committees that support his candidacy have reported raising at least $1,716,355 from the start of the race through Nov. 13.

City Councilman Kevin Faulconer — the race’s lone Republican — and the independent committee supporting him reported receiving at least $1,239,274 in contributions in that period.

Former City Attorney Mike Aguirre did not file a disclosure report. When reached by phone Friday evening, Aguirre said that his campaign’s treasurer had informed him that only candidates who raise at least $10,000 must file. A voicemail left with the treasurer was not returned. According to his last comprehensive disclosure report, Aguirre had reported raising $5,455 through Nov. 2.

I'll have more from KPBS via their YouTube channel later.  I've subscribed and have already found some interesting videos that are on topic here.
Posted by Pinku-Sensei at 10:12 PM