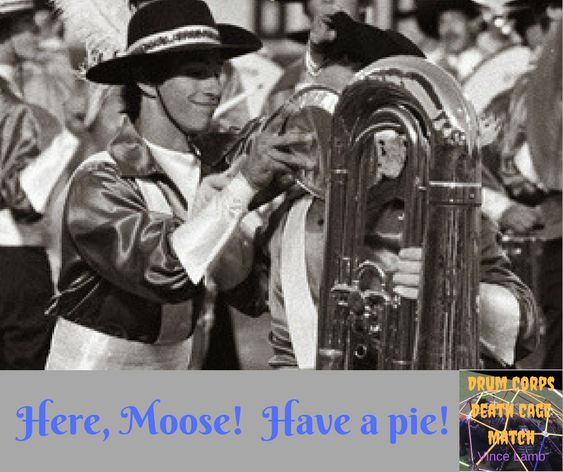 I often write that I'm an environmentalist, I recycle.  In that spirit, I'm re-using a video I first used in last year's Follow-up to Pi Day.

[T]here is also an endearing and enduring ritual enjoyed by drum corps fans that cannot make the journey to downtown Indianapolis for Pi Day. By the tens of thousands, they cyber-unite with fellow fans and watch a famed video clip of the now defunct North Shore Massachusetts-based corps North Star at the 1978 World Championship Finals in Denver.

In this clip, you will see contra player Joey "Moose" Interbartolo get hit in the face by a pie launched by percussionist Bruce Wallas. And because we at DCI appreciate conceptual high art, as evidenced by our recent "Harlem Shake -- Drum Corps Style" video, you will see Joey get hit in the face not once, but multiple times during Stevie Wonder's "Sir Duke," the anthem Wonder wrote to commemorate the Hawaiian musical influence of famed surfer and Olympic swimmer Duke Kahanamoku.

I believe you'll agree that we can refer to this singular act of loony silliness internationally as the most glorious 3.14 seconds in the history of drum corps.

As I wrote in my follow-up to Star Wars Day in 2012, I have a personal connection to the performers and the performance.


I wasn't marching in North Star that year, but I was in the stands for this performance and I marched with them in 1979 and 1981.

First Star Wars Day and now Pi Day--I had no idea 36 years ago that this show would become so good for geeks!
Posted by Pinku-Sensei at 12:05 AM