Weather and the economy for February 2014 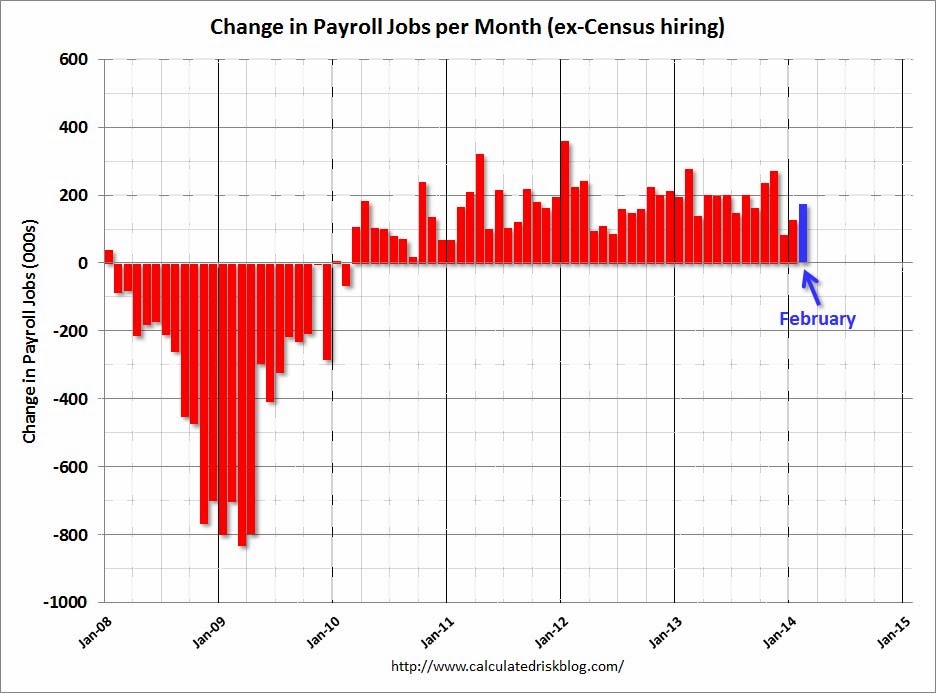 Yesterday's job report was the best this winter, with 175,000 added to nonfarm payrolls in February.  However the unemployment rate increased slightly to 6.7% from 6.6% as participation in the labor force increased.  The usual suspect for the slow increase in employment was the weather.  Bill McBride on Calculated Risk blamed it twice, first in the announcement of the news--"This was a decent employment report considering the recent harsh weather"--then in the next entry commenting on the report--"Hopefully the severe weather is behind us, and the pace of employment growth will pick up."

McBride was not alone in blaming the weather.  The University of Michigan did as well, reporting on the last day of last month that Weather freezes consumer confidence in place in February.


ANN ARBOR—Despite the harsh winter, consumer confidence has remained essentially unchanged since December, according to the Thomson Reuters/University of Michigan Surveys of Consumers.
...
"While the weather has kept consumers away from retail outlets, it has not had a detrimental impact on their outlook for future economic conditions," said U-M economist Richard Curtin, director of the surveys. "Consumers have displayed remarkable resilience in the face of the polar vortex as well as higher utility bills and minimal employment gains.

"This reaction stands in sharp contrast to the instability in confidence associated with the government shutdown and policy stalemates in the past few years. Without another self-inflicted (Washington, D.C.) shock in the off-year election, consumers are prepared to renew the pace of spending in the months ahead, with an overall gain of 2.6 percent in 2014."

At least the weather didn't cause confidence to drop.

Speaking of weather at the end of February, JPL/NASA posted the video NASA's AIRS Sees Rivers of Rain for California.

Wet weather is again hitting drought-stricken California as the second and larger of two back-to-back storms makes its way ashore. The storms are part of an atmospheric river, a narrow channel of concentrated moisture in the atmosphere connecting tropical air with colder, drier regions around Earth's middle latitudes. The storm that arrived on Feb. 26, 2014, and the one about to hit, are contained within the "Pineapple Express," an atmospheric river that extends from the Pacific Ocean near Hawaii to the Pacific coast of North America, where it often brings heavy precipitation. This next storm is expect to be the largest rain producer in Southern California in three years.

Count this as the California drought update for the week.
Posted by Pinku-Sensei at 5:02 PM