Morning after--risks of drinking for seniors 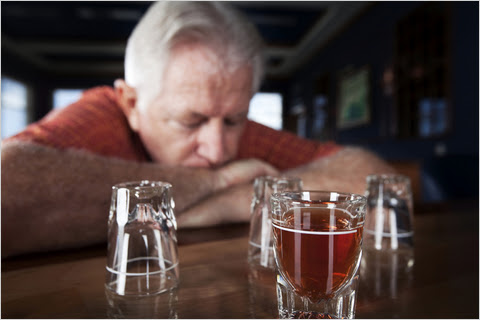 After two entries celebrating drinking, it's time to acknowledge the health risks of alcohol.  Here are two news items from Overnight News Digest: Science Saturday (Another possible HIV cure) on Daily Kos that explain why drinking is probably a young person's game.

AUSTIN, Texas — Studies have shown that moderate drinking, such as sipping a relaxing glass of wine with dinner, may be beneficial to your health. Yet a new psychology study from The University of Texas at Austin shows that binge drinking may shorten lifespan, even for those who are overall moderate drinkers.

The study, to be published in the May online-only issue of Alcoholism: Clinical & Experimental Research, found that older adults who engage in binge drinking have double the odds of dying within the next 20 years in comparison with moderate drinkers in the same age bracket who don’t engage in binge drinking. Results are currently available at Early View.

“Binge drinking is increasingly being recognized as a significant public health concern,” says Charles Holahan, professor of psychology and lead author of the study. “In fact, the U.S. Centers for Disease Control recently concluded that binge drinking is ‘a bigger problem than previously thought.’ Ours is one of the first studies to focus explicitly on an older population in examining binge drinking among, on average, moderate drinkers.”

Heavy drinking, probably expressed as binge drinking, was one of the reasons why the life expectency dropped more than a decade for men in Russia after the collapse of the Soviet Union.

Next, the University of Florida explores For older drivers, study finds, one drink may be one too many.

GAINESVILLE, Fla. — You may have only had one glass of wine with dinner, but if you’re 55 or older, that single serving may hit you hard enough to make you a dangerous driver.

So, baby boomers, what you suspected is true: you can’t party like you used to.

Sara Jo Nixon, a professor in the departments of psychiatry and psychology at the University of Florida and doctoral candidate Alfredo Sklar tested how drinking legally non-intoxicating levels of alcohol affect the driving skills of two age groups: 36 people ages 25 to 35 and 36 people ages 55 to 70. They found that although neither age group imbibed enough alcohol to put them over the legal driving limit, a blood alcohol level of 0.08, just one drink can affect the driving abilities of older drivers.

Based on the study findings published in the journal Psychopharmacology in February, the researchers say it could be time to reassess legal blood alcohol levels for all drivers.

In other words, because older people become impared more easily, the blood alcohol limits for everyone may have to be lowered.

I read both of these after my wife and I watched "Nebraska," which features Bruce Dern playing an elderly alcoholic.  That film showed the effects of drinking in fiction, while the research demonstrated something even worse in reality.  After seeing the film and reading the articles, I'm glad I haven't had much to drink this year.
Posted by Pinku-Sensei at 9:51 AM