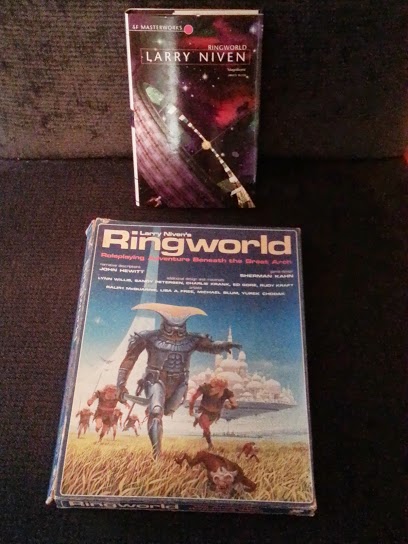 As I promised yesterday,* I'm beginning the reverse countdown of most viewed posts from the past year.  I'm departing from the procedure I used the past two years, in which I ordered entries according to what I call the primary counter as the first resort, then used the secondary counter for the remainder of the top 20 entries not listed in the primary counter's top ten, as I did first in The first year of Crazy Eddie's Motie News: last of nine parts, where I called it "the alternative counter."  Instead, I'm ordering them strictly according to the secondary counter, which I find much more complete, as well as more useful for an annual retrospective.

The primary counter is what I see on the blog dashboard for top posts by past two hours, day, week, month, and history of the blog, while the secondary counter is what I see when I look under all posts.  It does not give a listing for the past year, which would be very convenient.  The primary counter's page view statistics also tend to reach a maximum and decrease over time as duplicate page views from the same IP address and page views generated by "referrer spam" and other bots gets culled.  The secondary counter tallies all page views regardless of source or duplicate views.  That one does not decrease over time.  It also gives stats on all entries, not merely those that make it into the top ten during one of the time frames listed above.

That explanation out of the way, the most viewed entry of the third full year of the blog is Finally, a Ringworld movie!  That entry from May 23, 2013 had 1317 page views according to the secondary counter and four comments.**  It was not among the all time top ten according to the primary counter, even though it has more   That's the one in which I repeated my twenty-year-old grousing about how I wrote an adventure for Chaosium's Ringworld table-top RPG, but lost all that effort because the movie rights to the book were sold and the movie production company asserted that they had the game rights, too.  To add insult to injury, there was no movie.  Apparently, that will change, as SyFy announced that they will develop the book into a four-hour miniseries.  If so, good news, but no Farnsworth until it reaches the little screen.  According to this video review, that might be this fall, but I have my doubts, as IMDB lists it as 2015 and beyond.

Notes: Announced as a 4 Hour mini-series in development in the spring 2013...Writer "Michael R. Perry" will adapt the 1970 Science Fiction Novel for a TV show by SyFy.

As for how this entry became so frequently viewed, that's easy--the power of search terms.  The phrase "ringworld movie" currently has 129 results, tying it for seventh with the URL of the blog itself among all search terms for the entire history of the blog and making it the most searched new term for the past year.  In this way, the entry is similar to Detroit "what people think" meme and Dungeons and Dragons alignments for Game of Thrones characters from 2012, both of which became top entries through web searches.

As for how I feel about this, at least hundreds, if not thousands, of people have read about my misadventures with the Ringworld game and my disappoinment that there hasn't been a movie--yet.  Knowing that people have heard my complaints and that something is being done about them, even if I had nothing to do with the action, will generally get me to shut up about them.  It may also be enough to get me to buy a Larry Niven book again, too.

*My promise included the following image that appeared in the preview on Facebook.

That elicited the following complaint from Nebris.


I call False Advertising. You have a Ring World/Orbital illustration, but then speak only of 'blog views'. *shakes fist at you*

I decided to snark back at him.


It's called a teaser. The next article will be about my Ringworld entry. Besides, the title told the truth. It said statistics, and I delivered.

And I promised that I'd write about the Ringworld in this entry and I delivered on that, too.

Speaking of complaints in comments, I got some good ones at the original entry two months ago from Katja Novik.  The first one on January 8, 2014 at 11:02 PM was a prediction about the quality of the miniseries.


I bet you they will over glamourize everything, white wash the cast and dumb down the plot. I expect to be severely disappointed so when it happens and I am disappointed it won't suck as much.

I addressed her points, one by one.


1. Over glamorize everything--I'm just hoping they have enough of a CGI budget to do Ringworld, the puppeteer planet Hearth, Chmee-Speaker-to-Animals, and expecially Nessus justice. What you're afraid of is the least of my worries. A glamorous 30th Century Earth would be cool to behold.

2. Whitewash the cast--only Louis Wu would be a problem and he's only half-Chinese, if that. Teela Brown could be any color, although I recall she was more white than anything. As for the rest, they're aliens.

3. Dumb down the plot--It's SyFy. About the only smart thing they've done is Dune and that was a decade ago. Everything else has been dumbed down and it's worked for them.


I'd rather have some one like J.J Abrams pick up the movie than Syfy channel.. Just because some thing works for that crappy channel on television doesn't mean I'll be satisfyed with the movie they made of my favorite book.

I managed to get the last word in.


J.J. Abrams? I wish. As big a deal as Ringworld is in science fiction literature, it just doesn't have the same power in scifi media and isn't likely to get as big a name. Even so, big names don't guarantee success. Dune had David Lynch as writer and director and Dino DeLaurentiis as a producer, but it was a mess on the screen. Morgan Freeman is still trying to get someone to fund Rendezvous with Rama, and Keanu Reeves has given up on a live-action Cowboy Bebop, as he's now too old to star as Spike Spiegel.

Besides, Michael Perry is a very good writer with an Emmy to his name. I think he'll do well. My one worry about him is that he has a crime and horror background. A Ringworld that plays up the violence, deception, and weirdness of the plot and setting might be very interesting to watch, but would be very different from what a lot of fans of the book would envision the movie version in their heads.

That was much better than a lot of comments the blog has received over the past two year.  Hey, Katja, come back!

**And counting.  During just the past two days, it's earned nine more for a current total of 1326 page views on the secondary counter.