Floods in Colorado, the other top post for the third year of Crazy Eddie's Motie News, plus other climate news 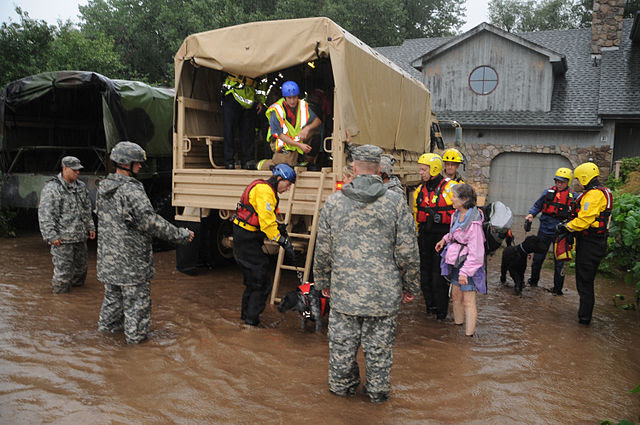 According to the secondary counter, Floods in Colorado from ABC News and University of Colorado, posted September 15, 2013, is the third most viewed entry from the third year of this blog and the third most popular in the entire history of the blog with 1201 page views, behind both Space news for Apophis Day in second and first place Finally, a Ringworld movie!  However, according the the primary counter, it's not only the most viewed entry of last year, but the number one entry in the history of the blog with 1135 page views, an achievement I commemorated in My stats didn't fall in October.


Floods in Colorado from ABC News and University of Colorado, finished its climb from 841 page views in September through 939 page views to finish October with 1163 page views, making it the most read entry in the history of this blog, kicking The Buzz about Detroit for the week ending May 28, 2011 from Model D Media out of the top 10 on the way.  That one went to number one on its own, although I padded its lead by linking to it at Kunstler's blog.

I'm not sure what propelled that entry unless it got linked somewhere that used "no follow," but it attracted readers for weeks, pushing the blog's page views to a monthly record.

Yes, the entry set one record and helped set another.  Too bad for it that I changed my procedure for ordering entries this year.  Still, it does deserve recognition as the other top post.

It was not the only entry about climate and weather to make this year's top twenty.  Follow over the jump for the rest.

The ninth most viewed entry for the third year of this blog is Hot topic: Climate change will lead to more violence plus Sunday night crime stories, posted August 5, 2013, with 352 page views.  This is one of the first entries so far in this retrospective the success of which I can attribute to promoting at Kunstler's blog, which I did in the first page of comments to "The Dreadful Summer Wind," the post of Kunstler's that brought my blog the most traffic last year.  That was one of Kunstler's early entries after he had revamped his blog in June, a change that allowed me to promote individual entries once more.  One of the other top twenty entries also got its readership in the very next comment, a story I'll pass on later this month.

The seventeenth most read entry for the third year of this blog was Time Magazine on peak oil and climate change, posted on May 20, 2013 with 263 page views.  I'm not sure what earned that entry its page views, but it certainly wasn't Kunstler; comments on his blog were shut down beginning that day and not opened up again until June 9th.  Maybe I posted the link at Elaine Meinel Supkis's blog.  If I did, that's a sign that I was getting desperate.  I really don't care for her much any more, something I've mentioned before.

As one can read, my interactions with other bloggers, especially Kunstler, have been important to the development of this blog.  The next entry will document how another Peak Oil blogger, the Archdruid, has also been instrumental in improving my blogging.  Stay tuned.