715 new exoplanets in this week's space and astronomy news 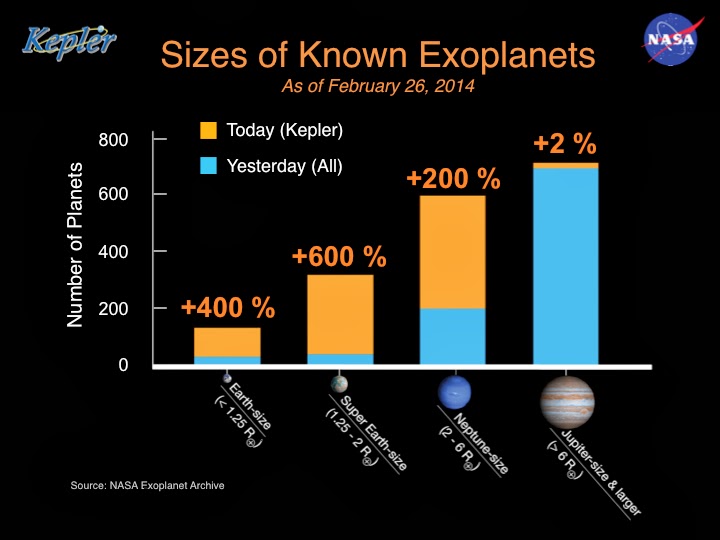 I begin with the top story from Overnight News Digest: Science Saturday (715 New Exoplanets) on Daily Kos.  First, Science At NASA with ScienceCasts: A Sudden Multiplication of Planets.

Today, NASA announced a breakthrough addition to the catalog of new planets. Researchers using Kepler have confirmed 715 new worlds, almost quadrupling the number of planets previously confirmed by the planet-hunting spacecraft. Some of the new worlds are similar in size to Earth and orbit in the habitable zone of their parent stars.

The 715 newfound planets, which scientists announced today (Feb. 26), boost the total alien-world tally to between 1,500 and 1,800, depending on which of the five main extrasolar planet discovery catalogs is used. The Kepler mission is responsible for more than half of these finds, hauling in 961 exoplanets to date, with thousands more candidates awaiting confirmation by follow-up investigations.

"This is the largest windfall of planets — not exoplanet candidates, mind you, but actually validated exoplanets — that's ever been announced at one time," Douglas Hudgins, exoplanet exploration program scientist at NASA's Astrophysics Division in Washington, told reporters today.

DarkSyde on Daily Kos also wrote about the discovery in This week in science: All these dirty worlds are yours.

Follow over the jump for the rest of last week's space and astronomy news.

The Punch (Nigeria): The archaeology of the stars
by New York Times Service
February 25, 2014


Four years ago, Anna Frebel, a young astronomer at the Massachusetts Institute of Technology, found an ancient star in a neighboring galaxy whose chemical composition proved nearly identical to some unusual stars on the outskirts of our own galaxy, which are older than the Milky Way itself.

It was a striking discovery, suggesting that the relatively young Milky Way is growing by conquest — “cannibalising” nearby older dwarf galaxies. And it underscored the importance of a new way of learning how the universe evolved from the Big Bang to the modern cosmos.

If this story looks familiar, it's because there was another article about "the archeology of the stars" in Space news for the last week of February.

Finally, a story about an astronaut, if not space proper, from the University of Michigan: Former astronaut Mae Jemison to speak at U-M.

The conference, "Transforming the Face of Leadership," is the largest staff development event at the University of Michigan.

As an environmental studies professor at Dartmouth College, Jemison taught and researched technology design and sustainable development with special emphasis on developing countries.

That's it for last week's space news.
Posted by Pinku-Sensei at 9:26 PM