'Atlanta' and 'Master of None' showcase diversity at the Emmy Awards 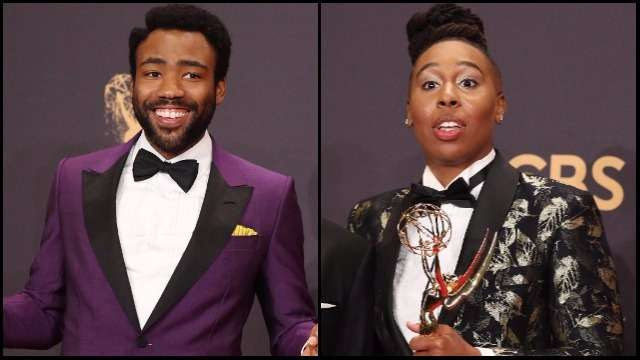 I concluded 'Veep' leads comedy series with five Emmy Awards with "I'm not done with comedy.  I plan on writing about the rest of the winners in comedy series tomorrow, then the variety winners beginning on Wednesday."  It's Wednesday, so I'm following up on two comedies that tied for second in their genre with two awards, "Atlanta" and "Master of None."  Both of them were cited by Wochit News, which I quoted first in "Fear the Walking Dead: Passage" contributes to diversity at the 2017 Primetime Emmy Awards and again in 'Veep' leads nominated comedies at the Primetime Emmy Awards with 17 nominations.

Donald Glover cleaned up at the 2017 Emmy Awards winning beast lead actor and best director for a comedy series for 'Atlanta.'

Glover thinks Trump may be responsible for his award.  Not entirely, as he won for Best Actor in a Comedy Series at the Golden Globes and the Critics' Choice Awards, both of which awarded him their statues before Trump was inaugurated.  Still, the Emmys cap a very good year for Glover.

It turns out I called one of Glover's victories and half-called another.  For directing:

I was less optimistic about his winning the acting award, as I wrote "The one wild card is Donald Glover.  I don't think he's ready to beat Tambor, even if it seems like his year."  I was wrong; it was Glover's year, but at least I acknowledged the possiblity that he could win.

The Hollywood Reporter also mentioned Lena Waithe and Aziz Ansari's win for Outstanding Writing for a Comedy Series.  Ansari was a returning winner, so I called this win.  On the other hand, I did not expect "Master of None" to win Outstanding Single camera Picture Editing For A Comedy Series.  I thought that would go to "Veep" or "Silicon Valley."  Still, I'm glad to be pleasantly surprised with a victory for diversity instead.

Stay tuned for more about the Emmy Awards after another driving update.
Posted by Pinku-Sensei at 12:00 AM