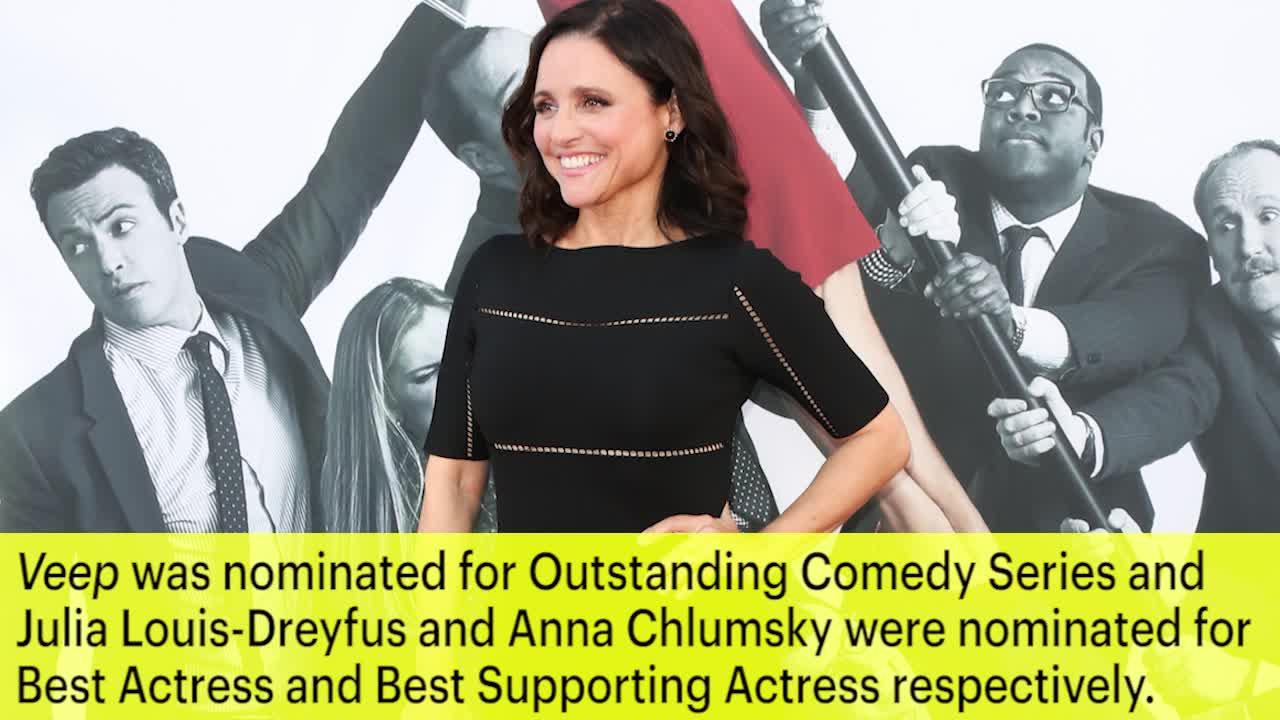 I concluded Infidel 753 and I discuss zombies by telling my readers to "Stay tuned for the post about the Emmy nominees I promised in "13th" vs. "O.J.: Made in America" plus other non-fiction political programs nominated at the Primetime Emmy Awards."  It was supposed to be "a post about the scripted comedies and dramas about poliitics, including shows starring two fictional presidents, Selina Meyer and Frank Underwood," but I decided to split the comedies and dramas into to posts.  To quote "A Funny Thing Happened on the Way to the Forum," "tragedy tomorrow, comedy tonight!"

What's also impressive is the number of Washington insiders who say that it is the most realistic portrayal of political life on American television, more so than "House of Cards," the subject of tomorrow's entry.  I'll begin with WYNC's quote.

According to Jess Mcintosh, a democratic operative who works in communications, “Our lives are not like 'House of Cards.' There is really nothing that 'House of Cards' presents other than the names of certain Washington locations that bear any relation to reality.”

“'VEEP' is sometimes so painful to watch because it is so close to things that have happened in my world. I’m aware that it is funny, but I can’t possibly laugh at it,” she continues.

The Wrap elaborates on what "Veep" captures that "House of Cards" does not.

“The funny thing about ‘Veep’ is, we as people who worked in the White House always get asked, okay, what’s the most real? Is it ‘House of Cards? Is it ‘West Wing’? And the answer is, it’s ‘Veep.’ Because you guys nail the fragility of the egos, and the, like, day-to-day idiocy of the decision-making,” [Tommy] Vietor said.

I finish the comparison with this passage from The Atlantic.

House of Cards does get some things right. Its set design is impressive, down to the decor of the congressional offices and the style of the nameplates on the doors. And it correctly captures a new media landscape influenced by Politico and Buzzfeed (er, Slugline) while only somewhat exaggerating the corrosive impact of money on modern politics.

But Veep gets much more of the total picture, and it does so more enjoyably by presenting the capital as folly, not awash in soul-crushing darkness.

It may not make Congress's approval ratings rebound from the gutter, but the truth that Veep captures is that the worst of the worst in Washington are more likely to be buffoons than monsters: Politicians and their aides are probably not killing people in D.C., but they often are shooting themselves in the foot.

There you have it.  To paraphrase what a Canadian politician said about the Canadian left, our politicians are more likely to be gauche than sinister.

I begin with the seventeen nominations in twelve categories for "Veep," which also includes two nomionations for "Black-ish."

As I wrote above, "Veep" is a two-time returning winner in this category, so it's definitely the favorite.  The biggest competition I see for it is "Atlanta," which won Outstanding Achievement in Comedy at the 2017 Television Critics Association Awards.  A dark horse would be "Modern Family," which won in 2014.

Again, as I wrote above, Julia Louis-Dreyfus has won this category every year that "Veep" has aired, so she is a prohibitive favorite.  That written, she's in very good company with her fellow nominees, especially Jane Fonda, Lily Tomlin, and Allison Janney.  Tracee Ellis-Ross also does an outstanding job in "Black-ish."


Yes, she's been nominated five times.  I don't think she'll win unless the voters split their ballots among the multiple nominees from the same shows.  I doubt that will happen.  Instead, I exptect that Kate McKinnon, who won last year, will repeat.  Still, that is a political show, even if it's one I won't get to until next week.

Aziz Ansari is the returning winner, so I'd say he's the favorite.  As for the rest of the field, Alec Berg and David Mandel are returning nominees, so they have a shot.  So does Donald Glover for "Atlanta."  I have a feeling it might be his year in comedy.

Outstanding Production Design for a Narrative Program (Half-Hour or Less)

"Transparent" is the returning winner, so it's the favorite.  The next best bet is "Silicon Valley," which won in 2015.  "Veep" still has a chance, as it has been nominated in this category every year it has existed, which is since 2014, but I'm not optimistic.

Outstanding Casting for a Comedy Series

"Veep" has won this category two years in a row and none of the previous winners are nominated (most are no longer being produced), so it's the favorite.  "Silicon Valley" and "Transparent" are the only other returning nominees and "Veep" has beaten both of them, twice in the case of "Transparent."  "Atlanta" might pull an upset, but I wouldn't bet on it.

There is no returning winner, as the category didn't exist last year.  Therefore, I have no idea who might win, but I'm still rooting for "Veep."

"Crazy Ex-Girlfriend," last year's winner, is not returning.  On the other hand, "Veep" and "Silicon Valley" are returning nominees, so I would say they're the favorites.

"Mozart in the Jungle" is the returning winner and likely favorite.  The next most likely is "Modern Family," which has won three times.  As for "Veep," it's been nominated four years in a row.  It may not be the best, but is certainly has consistent high quality.

That takes care of the categories that have "Veep" as a nominee, so it's time to move on to "Black-ish."  I'm including the show here because it addressed Trump's election.

The ABC sitcom "Black-ish" came out with one of the more explicit commentaries of any scripted show on the election of Donald Trump with its episode Wednesday night, "Lemon." And critics are piling on praise for it.

The Emmy-nominated show, which has previously addressed Black Lives Matter and police violence, used the character Dre's workplace to talk about the presidential election.

Anthony Anderson, who plays Dre, delivered an impressive monologue on the subject.

“I love this country even though at times it doesn’t love me back,” he said. “For my whole life, my parents, my grandparents, me, for most black people, this system has never worked for us. But we still play ball, tried to do our best to live by the rules even though we knew they would never work out in our favor, had to live in neighborhoods that you wouldn’t drive through, send our kids to schools with books so beat up you couldn’t read them, work jobs that you wouldn’t consider in your nightmares.”

He added: “You think I’m not sad that Hillary didn’t win? That I’m not terrified about what Trump’s about to do? I’m used to things not going my way. I’m sorry that you’re not and it’s blowing your mind, so excuse me if I get a little offended because I didn’t see all of this outrage when everything was happening to all of my people since we were stuffed on boats in chains. I love this country as much — if not more — than you do. And don’t you ever forget that.”

He definitely deserves his nomination.

This was one of the categories singled out in "Fear the Walking Dead: Passage" contributes to diversity at the 2017 Primetime Emmy Awards, when I quoted Wochit News.

That's laudable, but Jeffrey Tambor is the two-time returning winner.  He's the favorite and has beaten most of these actors before.  The one wild card is Donald Glover.  I don't think he's ready to beat Tambor, even if it seems like his year.

Finally, a category with a show that has made political commentary a staple, "South Park."

I'm not rooting for "South Park."  I don't agree with its politics, which are libertarian, but it would be unfair and incomplete to ignore the show.  As for the nominee I am rooting for, it's "Elena and the Secret of Avalor," which I noted in Lots of politics in nonfiction television at the 2017 Television Critics Awards "looks like the most conventional fantasy."  That written, I doubt either will win.  "Archer" is the returning winner.  "South Park" last won in 2013 and "The Simpsons" last won in 2008.  I expect "Archer" will repeat.