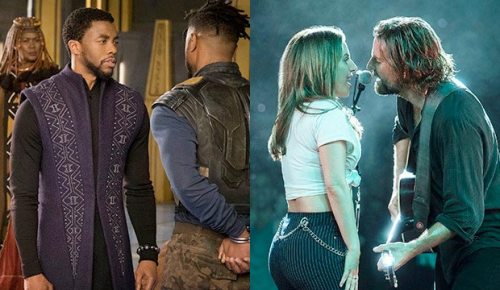 A belated Happy Hump Day!  I'm continuing to be the DJ and bartender for this weekly series while Don Durito is returning from his walkabout.  For today's theme, I'm sharing songs from movies nominated at the Grammy Awards.  Yes, I'm a sucker for movie music and awards shows.  Today's category is Best Song Written For Visual Media.

I begin with a song that I predicted would earn a Grammy nomination last May, Kendrick Lamar, SZA - All The Stars from "Black Panther."


I also predicted that it would earn an Oscar nomination.  I'll have to wait until next month to find out if I'm right, but it did earn a Golden Globe nomination, so that's a start.  In the meantime, I'll note that "All the Stars" is also nominated for Record of the Year, Song of the Year, and Best Rap/Sung Performance.


Like "All the Stars," "Shallow" has four Grammy nominations.  In addition to Best Song Written For Visual Media, it is also nominated for Record of the Year, Song of the Year, and Best Pop Duo/Group Performance.

Those are the songs from this year's movies.  Follow over the jump for nominees from 2017.

Next, the Oscar winning "Remember Me" from "Coco," which I used in a comment to Midweek Cafe and Lounge, Vol. 49 and again in Drink to 'Coco' at the Saturn Awards for Cinco De Mayo.  Hey, I'm an environmentalist, I recycle.


The other nominees are also recycled, beginning with "Mystery of Love" from "Call Me by Your Name."


I conclude with "This is Me" from "The Greatest Showman."


I think those are indeed the right nominees from the eligibility period.  As for which will win, I suspect it will be "Shallow" with "All the Stars" and "Coco" being the most likely to upset it.