'Vice' may be the best political film of 2018, earning nominations before it even hits theaters 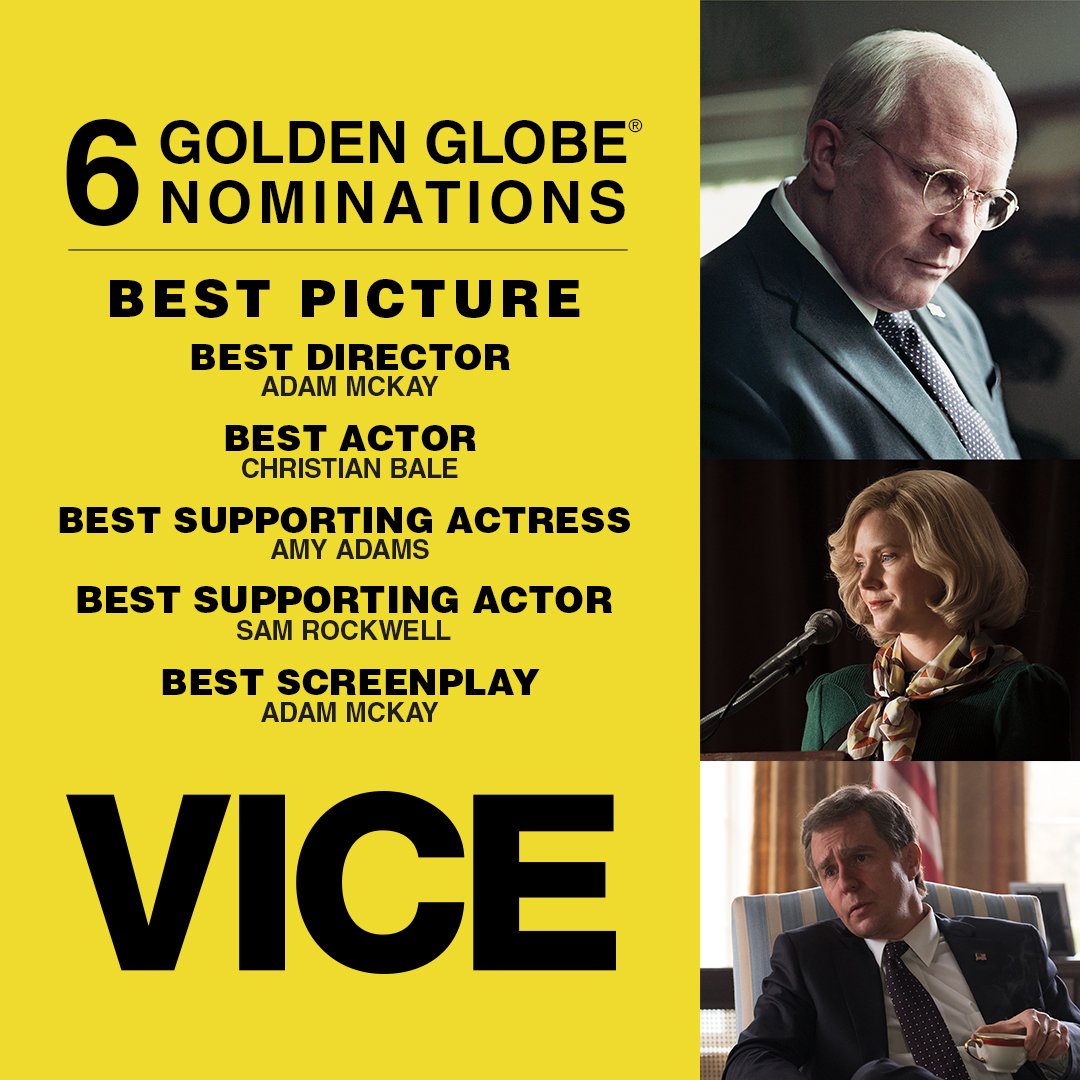 One of the nominees for this year's Golden Globe Awards completely blindsided me, "Vice."  I really should have seen it coming, but I had no idea until the nominations came out.  It's by the director of "The Big Short," which won the equivalent of best picture at the Producers Guild Awards as well as earning Adam McKay the Academy Award for Best Adapted Screenplay.  Two members of that cast, Oscar-winning Christian Bale and Oscar-nominated and Golden-Globe-winning Steve Carell even appear in "Vice" as Dick Cheney and Donald Rumsfeld, respectively.  Joining them are Oscar-nominated and Golden-Globe-winning Amy Adams as Lynne Cheney, Oscar- and Golden-Globe-winning Sam Rockwell as George W. Bush, and Image- and Razzie-winning Tyler Perry as Colin Powell, and Emmy-nominated and Critics'-Choice-winning Jesse Plemons in as yet unnamed role.  That's all-star talent!

Without seeing the film, I really can't say how well McKay uses them to tell the story, but I can make a guess based on the trailer.  Watch VICE | Official Trailer from Annapurna Pictures.

VICE explores the epic story about how a bureaucratic Washington insider quietly became the most powerful man in the world as Vice-President to George W. Bush, reshaping the country and the globe in ways that we still feel today.

The ad slogan boils down the point even more as "discover the untold true story that changed the course of history."  That alone would make this the political film of the year, but hold that thought, as I need to finish discussing the cast.

Based on the trailer, I can say that Bale as Dick Cheney and Rockwell as Bush look and sound very convincing.  I don't know enough about Lynne Cheney to know if Amy Adams caught her essence, but she's an outstanding actress, so I'm confident that she did.  As for Carrell as Rumsfeld, I didn't see or hear enough of him to tell how well he portrays Mr. "Known Unknowns," but I'm sure he'll be funny.

However, my readers don't have to rely on me looking at the trailer.  Watch Grace Randolph of Beyond the Trailer's Vice Movie Review.

Grace said that one could not get better acting than is on display in "Vice."  She praised Bale for his willingness to gain the weight to play Cheney.  In addition, she thought this is Adams' best performance ever, which is saying something, Rockwell is Bush, and Perry makes a very convincing Powell.  However, she did not think as highly of McKay's writing and directing and suspected that the mid-credits scene will antagonize its audience.  Huh.  Now I really will have to watch the movie.

As for this being the best political film of the year, that really depends on its competition.  Follow over the jump for the other scripted films about politics and government earning awards nominations so far to see how "Vice" compares.

Adam McKay's "Vice" leads the Golden Globes film nominations for 2019, which were announced in Los Angeles on December 6. Bradley Cooper and Lady Gaga each received Best Actor and Actress nods for their roles in "A Star Is Born," and Constance Wu was nominated for Best Actress in the comedy category.

One of the three next most nominated films is also about politics and government, albeit historical British court politics, "The Favourite" with five nominations. four of them competing against "Vice" for Best Motion Picture – Musical or Comedy and Best Screenplay – Motion Picture, and Best Performance by an Actress in a Supporting Role in any Motion Picture, where Emma Stone and Rachel Weisz are competing against Amy Adams.  In addition, Olivia Colman as Queen Anne earned a nomination as Best Performance by an Actress in a Motion Picture – Musical or Comedy.

Another of the three movies with five Golden Globe nominations also deals with a historical social and political theme, "Green Book," which is about dealing with racial segregation and discrimination in the South during the latter days of Jim Crow.  It is competing against "Vice" in all of its nominated categories, Best Motion Picture – Musical or Comedy, Best Performance by an Actor in a Motion Picture – Musical or Comedy for Viggo Mortensen who is contending with Bale, Best Performance by an Actor in a Supporting Role in any Motion Picture in which Mahershala Ali is competing against Rockwell, and Best Director – Motion Picture and Best Screenplay – Motion Picture, where Peter Farrelly is up against McKay.

Another movie that makes a point about racism is "BlacKkKlansman" with four nominations.  It is the most recognized political movie in the drama category with four nominations, Best Motion Picture – Drama, Best Performance by an Actor in a Motion Picture – Drama for John David Washington, Best Performance by an Actor in a Supporting Role in any Motion Picture for Adam Driver, who is competing against Rockwell and Ali, and Best Director – Motion Picture for Spike Lee against McKay.  Yes, it is also competing against both "Vice" and "Green Book for the last two awards.

Again, "Vice" is clearly the leading political film of 2018 based on the Golden Globes.  All of this was based on advance screenings for critics.  The general public will be able to see it on December 25.  Merry Christmas!
Posted by Pinku-Sensei at 6:17 PM