Stocks and oil crash plus a driving update for Pearl 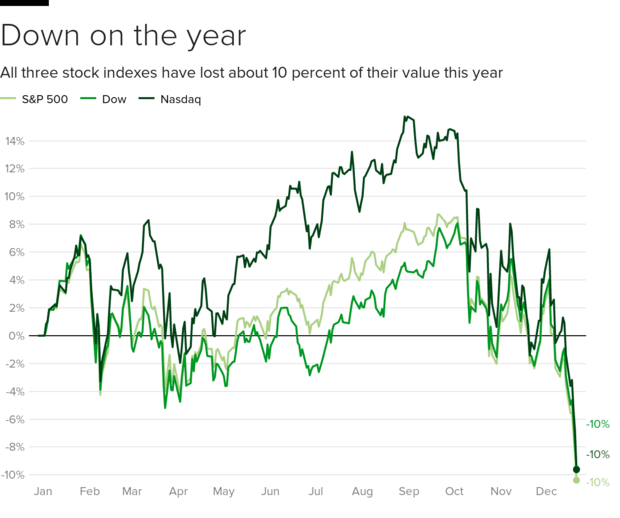 Three economic events happened yesterday that all connect, however weakly, to each other.  That also give me a chance to reassess where the economy is heading, including validating a prediction I made.

Stocks tumbled Friday, with the major averages all closing firmly in negative territory. The Dow fell 414 points, or 2%, bringing its weekly decline to 6.87%.

The S&P 500 also shed 2% on Friday, while the Nasdaq Composite fell 3% — entering a bear market, or down 20% from its highs — as some big tech names posted steep declines.

Business Insider did not quote the closing value of the Dow Jones Industrials Indes, but CNBC showed it in This sell-off has undone most of the Trump rally, says Riverfront's Kevin Nicholson.

Kevin Nicholson of Riverfront Investment Group and Mark Luschini of Janney Montgomery Scott discuss the benefits of investing in cash as it outperforms all other asset classes this year.

I already counted coup on two of those predictions in John Oliver helps update 'The tax bill and the U.S. economy in 2018 and beyond,' a top post of the seventh year of Crazy Eddie's Motie News when I responded to Paul W.'s Hope You Invested In Manure Futures....

The Dow broke 25,000 early in January, had no trouble getting above 26,000 but then struggled to stay there, and fell about halfway from 26,000 to 22,500, so my predictions look pretty good so far.  At worst, I'm one and one-half out of three and that score will stand no matter what else happens.  As for the future, watch what happens with interest rates.  Janet Yellen's successor and the rest of the Federal Reserve Board may not raise rates as aggressively as they would have before the worst one-day point drop in the Dow.  That may allow stocks to recover to 25,000 before falling below 24,000.

That additional prediction happened, too.  Now I can collect on the Dow falling to between 20,000 and 22,500 by the end of 2020 a year early.  I am now two-and-one-half out of three, three-and-a-half out of four if my response to Paul W. is included, on my predictions about the stock market, which is the final tally.  I'm not going to withdraw that score if the Dow falls below 20,000, which it is likely to do.  Watch Hedge fund veteran says the bear market has arrived, here's where you want to hide out for an expert opinion on CNBC.

He expects a stock market sell-off like 2000-2002, while I wrote "I expect the next recession to be somewhere between the 2001 recession or the 1990-1991 recession in its effects, probably closer to 2001."  I'm glad to see that someone who knows more than I do support my assessment, even if he doesn't know that he is.

Moving on to the second event, CNBC reported yesterday US crude ends the week down 11% at $45.59 for worst performance since January 2016.

Oil prices extended this week's sell-off on Friday, posting the worst weekly performance in nearly three years, as global oversupply kept buyers away from the market ahead of the long festive break.

As CNN noted, oil is in a bear market, having fallen 40% off its highs earlier this year.  That means its time to update Thanksgiving travel up as gas prices falling but still high.  Follow over the jump.

Lower oil prices mean lower gas prices.  Added to the seasonal decline, that is like adding weight to an already sinking ship.  WWMT confirmed this trend in Gas prices at two-year low for the holiday season.

Santa came early this year for millions of drivers hitting the road, with gas prices hitting a two-year low for the holiday season.

Prices could possibly drop lower in the coming days after the cost of oil and wholesale gasoline fell Thursday, according to AAA.

AAA is forecasting that about 3.3 million Michiganders will take a road trip between now and New Year's Day, with an additional 140,000 drivers expected on the roads, compared to last year, excluding out-of-state drivers.

More people are expected to travel over the holidays nationwide.  Watch RUSH BLOCK: Holiday travel will set records, AAA says from KHOU 11 in Houston, Texas, for that news.

More than 112 million Americans -- or one-third of country -- will travel over the holidays and most of them are choosing to drive.

I plan on being one of those 112 million, but I'll save that for another post.

After inversion of the yield curve, a strong rebound in crude oil would be another herald of recession.  As I wrote last year, "The second is a rapid rise in oil prices, which has occurred either slightly in advance or concurrently with every recession since 1973."  Enjoy the good times while they last, as I still expect a recession to begin by a year from now.