Last February, I posted If 2011=1989, then Muammar Gaddafi=Nicolae Ceausescu #Libya. Here's what I wrote. 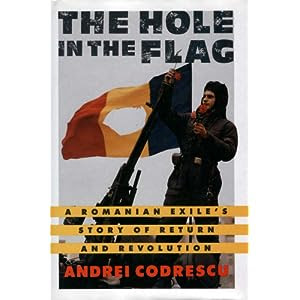 I can tell I'm getting old when I examine a situation, particularly a big picture foreign political crisis, and say "I've seen this movie before, and I know how it will end." For how this movie will end, read the pages at the links.

The Hole in the Flag

I'm not the first one to think this, either. On February 23rd, First Draft posted Gaddafi is Arabic for Ceausescu.

Eight months later, the analogy/prediction held true all the way to its bitter end.


Al Jazeera has acquired exclusive footage of the body of Muammar Gaddafi after he was killed in his hometown, Sirte.

"We have been waiting for this moment for a long time. Muammar Gaddafi has been killed," the de facto Libyan Prime Minister Mahmoud Jibril told reporters in Tripoli.

Abdul Hakim Belhaj, an NTC military chief, said Gaddafi had died of his wounds after being captured near Sirte on Thursday.
...
Meanwhile in Benghazi and Tripoli, crowds gathered in the streets to start celebrating the death of Gaddafi.

The only failure in the anology was that Gaddafi was not executed by a firing squad. Details, details. He still died after being captured and shot by the rebels at the end of a bloody civil war. Considering that history is more likely to rhyme than to repeat itself, that's good enough for me.

Now to consider the next question I asked.


The United States is the next Soviet Union, of course.


You and Dmitry Orlov would agree. However, it doesn't fit the analogy that well, as the other regimes that have fallen or are most at risk right now are all in North Africa and the Middle East. For the analogy to hold, the final domino (in the current row, at least) would be either Saudi Arabia or Iran.

As for the analogy I'd prefer, the U.S. isn't the next USSR. For starters, the former Soviet Union was never the hegemon; it was the challenger to the hegemon. Right now, that role is occupied by China, which doesn't bode well for China taking over the role, as all the previous challengers (Spain, France, Germany, and the USSR) have all failed to take over the top spot in the world system. The country that takes over is usually an ally of the hegemon (the UK was an ally of Holland's and the US is an ally of the UK). If the Chinese become a partner of the US instead of a rival, then they'll be in the perfect position to take over.

Instead, I see the US is the next UK. The UK was an empire of coal, and the US is an empire of oil. As oil declines, so will we. Whoever has control of the next energy source will be ascendant.

However, the future could prove me wrong. The US is in terrible shape to survive the decline of oil, and the people are not in contact with reality. Americans will not take it well and the results will not be pretty.

Right now, I'm not seeing the kind of ferment in Iran and Saudi Arabia that would bear out my prediction. On the other hand, the Occupy movement is making ygrii_blop's suggestion look very good.

Just for fun, this is the music that's playing in my earphones right now.

It's from "The Wind and The Lion," which is set in Libya North Africa (specifically Morroco). Thanks Nebris in comments.  Make of that what you will.
Posted by Pinku-Sensei at 11:04 AM