The following articles, along with those in Joseph Stiglitz addresses Occupy Wall Street and Last night's news on the state of the CoDominion, were originally featured in Overnight News Digest (Fast fill-in edition) on Daily Kos. 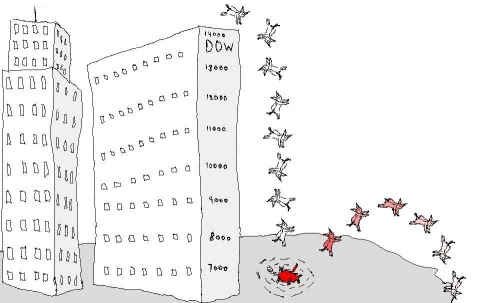 Fears over the banking sector's exposure to euro zone sovereign debt and plummeting value of assets across the board further led to a sharp widening of credit default swaps.

Weakening outlook for industrial demand weighed on copper and oil while flight-to-safety strengthened gold, yen and the dollar.

Global stocks continued to be hit hard, while U.S. stocks rallied at the end of the trading day. The dead cat just keeps on bouncing.


President Barack Obama's job-creation package effectively fell to pieces on Monday as a top Republican lawmaker said the House of Representatives will only pass portions of the $447 billion measure.

As Obama continued to press lawmakers for a vote on his signature legislation, Representative Eric Cantor, the No. 2 House Republican, said that was not going to happen.

Asked if the bill as a complete package was dead, Cantor said: "Yes."

We're still eating the Satan Sandwich, too. Some people are already thinking about sending it back to the kitchen.


The numbers are devastating: almost 2,000 poor kids in Texas with cancer, another 18,000 with diabetes and more than 350,000 suffering from chronic lung disease, heart disease or stroke.

What sounds like a grim statistical report on poverty and disease is actually a lobbying message from Medicaid advocates to Texas congressman Jeb Hensarling, Republican co-chairman of a special congressional panel charged with cutting at least $1.2 trillion from the U.S. deficit over 10 years.

Yes, it's still a Satan Sandwich.

Now for some good news.


Contract negotiations between Ford Motor Co and the United Auto Workers union are "progressing smoothly" and a breakdown in talks is "highly unlikely," the union said in a memo on Monday.

On Sunday night, the UAW called local union officials to Detroit for a Tuesday meeting in anticipation of reaching an agreement on a new four-year labor contract.

The UAW described this as an "indication that we believe we are very close to an agreement," according to the memo.

I'll be sure to follow this story, as it is a local sustainability issue.

Time to play Rift with my wife!
Posted by Pinku-Sensei at 12:01 AM