One reason Washington, D.C., is out of touch

In case you're wondering why our federal government was paying more attention to debt than to unemployment this year until Occupy Wall Street took off, Next Media Animation has an answer for you; unemployment is not a problem in Washington, D.C. In fact, the economy there is just fine.


According to a Bloomberg report, Washington, DC now has a higher median income than San Jose, home to Silicon Valley.

Isolated from the rest of the nation's woes, federal employees enjoyed over $120K in salary and benefits in 2010.

A driving factor is the lobbying industry on K Street, which is even giving Wall St. a run for its money.

The Beltway also attracts a disproportionate amount of high-salaried lawyers. There is one for every 12 people in the district.

How much more will the gap widen between rich and poor in America?

In the Beltway bubble, even the local poor are out of sight and out of mind; with a 6.1 percent unemployment rate and a median income of $84,523 (versus $50,046 nationally), Washington is now the wealthiest metro area in the country and, according to Gallup, departs from all 50 states in believing by a majority that the economy is getting better.

Even the real estate market there shows a decent recovery, as it is the only major city where home values have either risen or held steady the past four years, as shown in the following graph from Calculated Risk.* 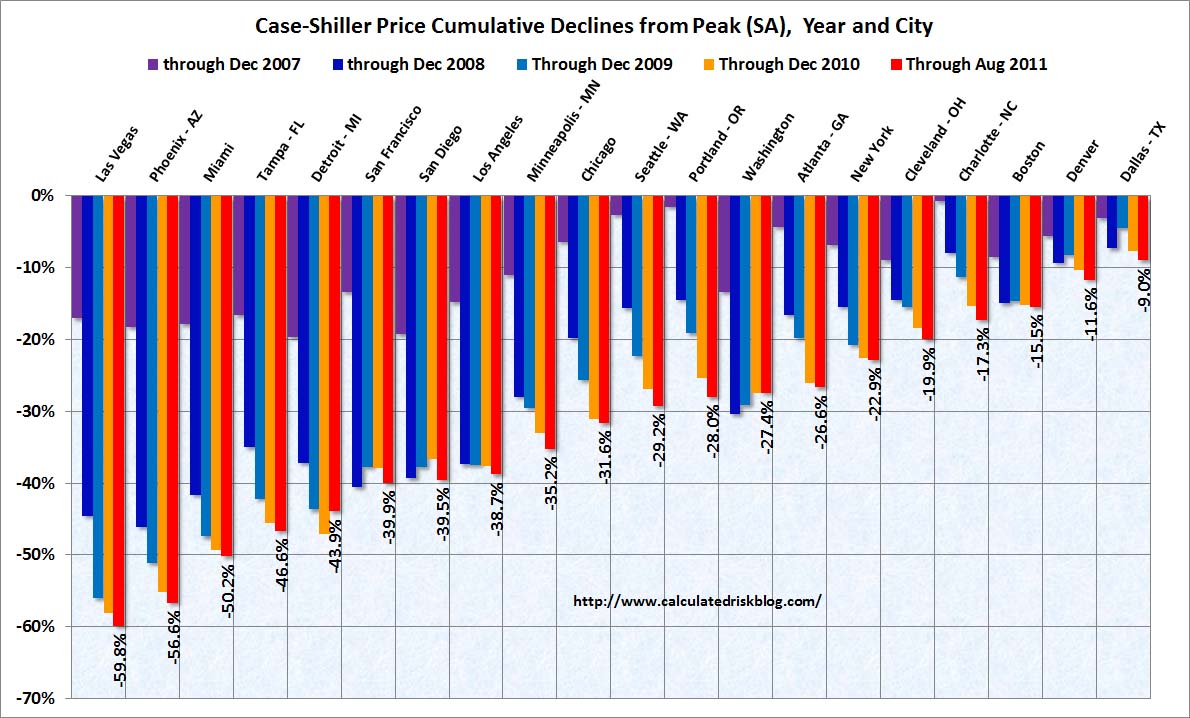 Real estate is still down from its peak, but at least the bust was brief and properties are still selling.

So, while the rest of the country is suffering from the Great Recession, D.C. is saying "What unemployment crisis?

*Since this is a Detroit-based blog, I will have to note that local home values appear to have hit bottom and are now rising--finally. I recall blogging about that turnaround this spring. That's better residential real estate news than most cities are reporting.
Posted by Pinku-Sensei at 11:00 AM