Today is the anniversary of the Women's March on Versailles 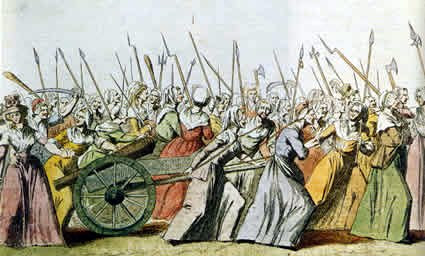 Commenter Nebris posted the following in his LiveJournal today.


"We're likely to stumble along at the present rate with a series of band-aids to keep us going, though sooner or later, things will fall apart. What happens then remains to be seen. But, today is the anniversary of The Women's March on Versaillesand I suspect at least some of The Rulers remember those events."


I decided to follow his link, which led to the following on Wikipedia.


The Women's March on Versailles, also known as The October March, The October Days, or simply The March on Versailles, was one of the earliest and most significant events of the French Revolution. The march began among women in the marketplaces of Paris who, on the morning of 5 October 1789, were near rioting over the high price and scarcity of bread. Their demonstrations quickly became intertwined with the activities of revolutionaries who were seeking liberal political reforms and a constitutional monarchy for France. The market women and their various allies grew into a mob of thousands and, encouraged by revolutionary agitators, they ransacked the city armory for weapons and marched to the royal palace at Versailles. The crowd besieged the palace and in a dramatic and violent confrontation they successfully pressed their demands upon King Louis XVI. The next day, the crowd compelled the king, his family, and the entire French Assembly to return with them to Paris.

These events effectively ended the independent authority of the king. The march symbolized a new balance of power that displaced the ancient privileged orders of the aristocracy and favored the nation's common people, collectively termed the Third Estate. Bringing together people representing disparate sources of the Revolution in their largest numbers yet, the march on Versailles proved to be a defining moment of that Revolution.

Looks a bit familiar, doesn't it?

Actually, I'd be surprised if anyone in charge outside of France and its neighbors in Europe remembered this. It's not something anyone in the U.S. other than the biggest history geeks, of which Nebris is one, would remember. Otherwise, the people at the Chicago Board of Trade wouldn't be pulling a stunt like this (Hat/tip to Gotta Laff at The Political Carnival.

Ladies and gentlemen of the CBOT, don't taunt the happy fun ball.
Posted by Pinku-Sensei at 11:20 PM