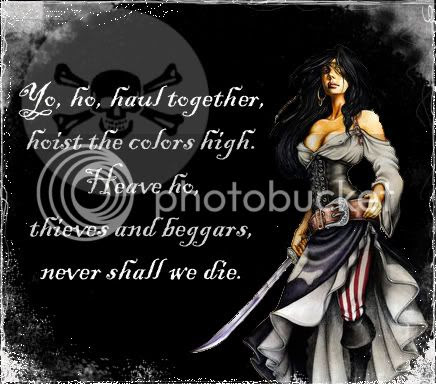 I realized today that I had some appropriate news for Talk Like a Pirate Day in Overnight News Digest: Fast Fill-in Edition.  In fact, it's sort of good news, but only sort of.  See for yourself in Disney and 'Pirates' producer Bruckheimer to end film deal by Lisa Richwine of Reuters.


(Reuters) - The Walt Disney Co and Jerry Bruckheimer, the producer behind the blockbuster "Pirates of the Caribbean" franchise and the summer flop "The Lone Ranger," will end their long-running film deal next year, the media company announced on Thursday.

The company and Bruckheimer decided not to renew their current deal which gives Disney first-look rights to the producer's films, according to a statement from Disney. They will continue working together on various projects, including a fifth installment in the "Pirates of the Caribbean" franchise.

Last week, Disney announced it would delay the release of the fifth "Pirates" movie, which had been scheduled to open in theaters in July 2015. No new date was set.
...
The partnership dating back to the 1990s produced 27 movies, including several big hits for Disney. The four "Pirates" films starring Johnny Depp have generated more than $3.7 billion in worldwide ticket sales, according to the website Box Office Mojo. Bruckheimer also produced for Disney the "National Treasure" series and dramas including "Con Air" and "Pearl Harbor".

Bruckheimer's most recent Disney release, "The Lone Ranger," flopped at the box office after its July release. Disney has projected it will lose up to $190 million on the film.

Between the acquisition of Lucasfilm and the Star Wars franchise and the bombing of "The Lone Ranger," I'm not surprised by this news.  It looks like Disney has decided to make Episode VII the tentpole for the summer after next, not another sequel to a completed trilogy.  I can't say I blame them.  At least there will still be a sequel.  That's what makes this sort of good news instead of merely bad news.

Now, it's time to listen to Johnny Depp as Captain Jack Sparrow talk like a pirate as he asks "but why is all the rum gone?"

Jack and Elizabeth have been left on the same island that Jack was once mutinied on by his original crew. In order to get off Elizabeth creates a smoke signal so that the royal navy will eventually see it, while looking for her. Jack when wakes up and notices what shes doing and goes about his whole "why's the rum gone" deal, lol, eventually realizes that she was right and there'll "be no living with her after this."